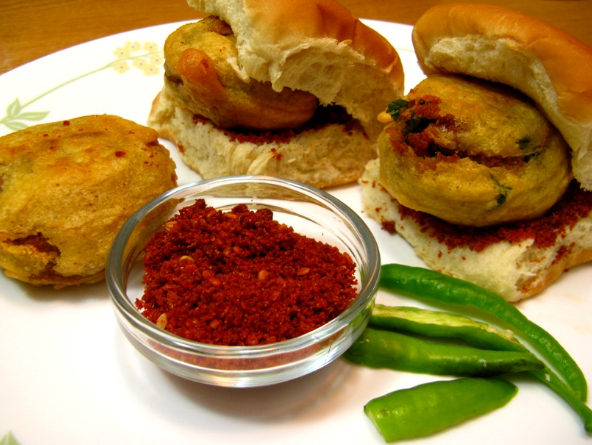 It all started when I decided to venture into rain soaked streets of Mumbai. That evening, my moist brown hands presented a ten rupee note to the shop keeper to get a garma garam Batata Vada( hot crispy pea vada). Savoring the hot spicy Vada pav I got the real taste of Mumbai.

The famous Vada pav is gram flour coated deep fried spiced mashed potato ball, sandwiched between slices of chutney slathered Mumbaiya style pav bread. Dubbed as the common man’s burger this one is available at every street corner of Mumbai, is super delicious and light on the pocket. So it manages to keep everyone happy, always.

Vada pav, like the Pav Bhaji, can also trace its origins back to Bombay. As various food history documentations claim, this dish is credited to Ashok Vaidya, a snack vendor who ran a street stall just outside Dadar station. Dadar being an important station was constantly spilling over with hordes of commuters. In a moment of culinary innovation, Vaidya reportedly came up with this recipe to satiate the hunger of the hustling crowd in desperate need of a snack that could be consumed on-the-go. In a way, it was like his own version of fast food. He served it up with fiery red chutney that could include coconut, peanuts, chilies, garlic and tamarind pulp. Safe to say, the rest is history.

Mumbai’s Vada Pav—belied the food’s humble constitution of a chickpea-battered, deep-fried, spicy mashed potato patty (the vada), tucked into a slightly sweet soft bread roll (the pav). One of the striking things and my favorite part of a vada pav is the spicy dry garlic chutney it comes with. It’s a necessary accompaniment, so sprinkle a generous amount while you assemble your vada pav. You also need some green chaat chutney so get started on that too. Both of these can be made ahead if you are cooking for a larger group.

Now I’ll teach you step by step how to prepare this delicacy. It usually takes 45 minutes for preparing 6 vada pavs.

You can also fry some green chillies to serve alongside, in true Mumbai vada pav fashion. Take care though, fresh chilies tend to burst in hot oil.

To assemble the vada pav: Place a generous amount of green chutney on one side of the pav or burger bun. Place a batata vada over it and top off with a generous sprinkle of garlic chutney. Serve with fried green chilies for those who want an extra spice kick. Some ketchup would go well with vada pav too.

While vada pav is popular as a roadside snack, I also had them for dinner on a rainy Saturday night. A good generous portion with large batata vadas (potato vada), soft buns, green chutney, and of course the red garlic chutney. What a mouth-watering treat it was! So eat your heart out through a Vada pav and let me know what you think about it.

Parma: The UNESCO city of Gastronomy