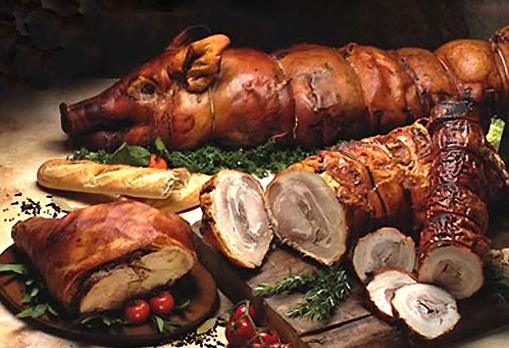 Plutarch once wrote: ‘We do not sit at the table to eat, but to eat together’ (Plutarch, s. I-II).
Gastronomy is referred to the art of preparing and serving food, the savoir-cuisiner and savoir-manger. It is also possible to identify one’s culture through its food and culinary habits. Food is the kaleidoscopic vector towards cultural expressions and diversities. Food is culture.
UNESCO accepted and introduced gastronomy, different cuisines and food within its 2003 List of the Intangible Cultural Heritage of Humanity(ICH). The Mediterranean Diet was firstly recognized as a UNESCO ICH in 2010 and a typical pork-based central Italy dish will delight the readers’ palate: porchetta.

Porchetta is a typical dish of central Italy consisting of a boneless seasoned pork. The dish is prepared locally across central Italian regions in different ways but the origin of the porchetta recipe is still uncertain. The inhabitants of Ariccia, Latium, claim the paternity of the original recipe as well as the cities of Norcia in Umbria, Campli in Abruzzo and Monterado in the Marche region.

The savoury porchetta may be prepared and aromatized according to two different traditions by using two different and, yet, fundamental ingredients. In the south of Tuscany, Castelli Romani and other central areas, the pork meets the rosemary as the main condiment and the best traditional place to smell the aromas of porchetta and eat it is probably at a Fraschetta, an Italian osteria serving local wine and food, in Ariccia. In other areas of Latium, Umbria, Romagna and Marche, the pivotal and   usual ingredient to aromatize is the wild fennel that permeates the pork and imparts a unique and irresistible savour to it.

Though the ingredients may change across different regions and cities, the preparation of the porchetta remains a widespread Italian tradition. A year-old pork is killed, deboned and bled dry. Then, after the boiling, epilation and seasoning according to the tradition, it is skewered from the mouth to the other end with a stick, tied and cooked for around 2-5 hours, depending on the pork size, in a wood-fired oven. The porchetta should be eaten the very same day of the preparation and is served with bread. The need to eat this delicious porchetta panino within a few hours brings togetherness while people enjoy a convivial meal moment.

At the origin of the Italian term “suino”, pork, lays the Greek verb “θύω”, sacrifice. Today, the Italian porchetta is a renowned dish, loved and appreciated by locals and foreigners coming to Italy. However, the historical significance of the cooked pork dates back to the ancient Greeks. Since the dawn of civilisation, the pork was used for religious purposes, sacrificing the animal to the deities of the Greek Pantheon before, and of the Roman Pantheon after. When the sacrifice occurred at the temple, only one part of the pork was fire-consumed to appease the gods and the rest was offered and shared during a “sacrificial meal” – say, a modern dinner.

Nowadays, the sacred value of the pork is replaced by a more social and convivial significance, especially from the first XVII century countryside Italian festivals. Food is a cultural heritage and, broadly, the ambassador of a culture with regard to its society, economic and environmental conditions and, predominantly, its identity. In the same way, the Italian porchetta has a social value during the sagre paesane (countryside festivals), fairs, markets, concerts and other social gatherings. It is the vehicle of social exchanges, enriching dialogues or an excuse to fare quattro chiacchiere, shoot the breeze.

In the Marche region, the heartfelt love and deep respect for the land are expressed through the conservation and use of secular gastronomic traditions passed down from generation to generation, such as the preparation of the porchetta. The close relationships linking the territory’s inhabitants to the fieldwork is well translated into the particular attention to food. The food legacy pervades the farmer life attributing to food and meals not only a nutritional value but also signifying a festive moment, a group gathering and solidarity. The hillside landscape is covered by olive trees, vineyards, wheat and sunflowers and maintains the characteristics of the sharecropping culture whose roots still influence the local culinary traditions. This is the reason why typical Marchegian products are those linked to the fieldwork.

One of the most important porchetta countryside festivals in Italy is the Sagra della Porchetta di Monterado in the Marche region. This May, the countryside festival reached its 61st edition. Following the tradition, the pork is cooked in a wood-fired oven and aromatized with wild fennel. During the sagra, concerts and performances of various street artists are organised, as well as festive gatherings in the squares, labs for children and artisanal markets. The atmosphere allows reliving joyfully the emotion of a past and, yet, profoundly land-rooted age through food, traditions, folk songs and dances.

It is extremely pivotal to know the history of a territory and the origins of products because it is through the understanding of a culture and the knowledge of its culinary essence that we can truly enjoy it fully. Food has a social value and represents one of the multiple convivial facets of a culture.

Click here to enjoy a quick Italian taste and view of the 60th “Sagra della Porchetta di Monterado” edition: https://www.youtube.com/watch?v=ITLgps-3YTU. Looking forward to meeting you there next May!

Marco Romagnoli, postgraduate student in Tourism Economics and Management with a focus on Cultural Heritage and Tourism at the University of Bologna, writes this article.
Email: marco.romagnoli91@hotmail.it
Mediterranean Diet, UNESCO ICH