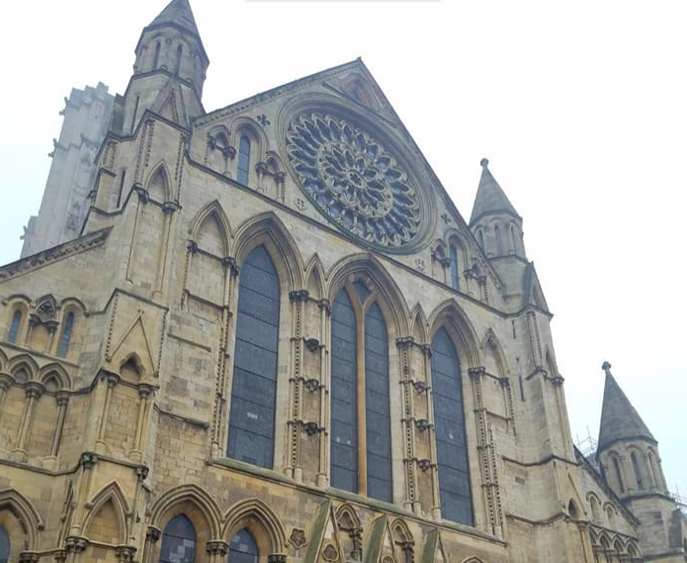 York is one of England’s finest historic cities; with a blend of Roman and Saxon influence, the settlers of York (the Vikings) originally named it Jorvik. The excitement of such antique riches to be discovered lead me to my first visit to York. Being my first visit, I had no idea what was in store for me.

So, on a freezing Sunday morning, we headed for York. As I arrived, I was greeted by York’s encircling walls which dates to the time of Roman occupation of the city. Our group of international students wanted to first see the Cathedral also known as The Minster. We went through this small passageway that leads onto York’s famous medieval streets and timber-framed houses are known as The Shambles, which dates back to 14th-century Anglo-Saxon design.

These buildings were once used for butchery and hanging up meat, but are now used for traditional Yorkshire restaurants with their delicious York Puddies (A wrap made with Yorkshire pudding), traditional English tea shops and pubs, some second-hand bookshops that cater to old styled books such as the Minster Book shop and Fossgate books, bakeries with their assortment of biscuits, shortbread cakes, cheesecakes and sticky toffee puddings, a funny cat paraphernalia store and Harry Potter wizard stores as The Shambles was also used as inspiration for the Harry Potter marketplace Diagon Alley (fun fact).

We made our way past these shops all the way to York Minster (Also known as St. Peter’s). The minister is the seat of the Archbishop, and as informed, in the 600s, the area was reported to be the first Christian church to be constructed on that site, later moving onto a stone one in dedication to St. Peter, and so on. However, the cathedral itself was built almost 250 years ago, around the 1200’s- 1400’s, is designed in a Gothic style. The cathedral itself has survived many issues, from structural collapses to invaders and two large fires.

So, here is my experience of York; an enchanting city with heritage encompassing food, culture and art (Don’t forget to visit the National Railway Museum and York Museum Gardens). To conclude our day by having a delicious Yorkshire pudding with Cranberry and mint sauce and later English Tea and macron at Betty’s, before heading back to Durham.

The Forbidden City in China