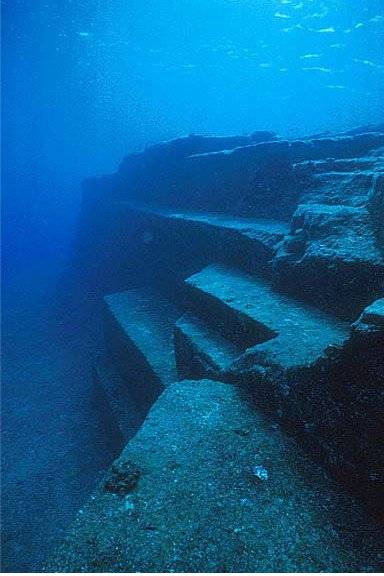 This platform or partially-stepped pyramid – also described as a stone ziggurat – is a monolithic rock formation similar in structure to those found in Latin America and the Middle East. It is believed to be between 8,000 – 10,000 years old (Kimura, 2004), although some experts think that it dates back to 2,000 – 3,000 years when the sea level was closer to its current level (Pacific Science Association, 2007). Some experts believe that the site is one of the oldest and most important archaeological discoveries in the world (Schoch, 1999). However, this specific submerged landscape (Underwater Cultural Heritage) is not one a WHS although the Gusuku site on the surrounding Ryukyu Islands is. This landform and its surrounding ruins were discovered by a local diver in 1985 (and have continued to be investigated and explored ever since).

The main Yonaguni monument consists of layers of sandstone and mudstone, a rectangular rock formation measuring 150 meters by 40 meters, 27 meters high (492 feet by 131 feet, 89 feet respectively) and 25 meters (48 feet) deep at the base [Note 2]. The top of its structure lies about 5 meters (16 feet) below sea level (Christie, 2014, Schoch, 1999). In total, the ruin covers 300 meters by 150 meters (984 feet by 492 feet) including other identified structures (around 15 ruins) found near to the island (Ryall, 2007). Some of the rock on this landform is made up of parallel, vertical and horizontal layered bedding plains from deposits believed to be old as 20 million years (Schoch, 1999). Surrounding the landform nearby are other structures and ruins such as castle and temple-like structures and a stadium, all of which are connected by roads and water lines or channels as well as retaining walls (Christie, 2014, Kimura, 2004, Ryall, 2007). Other artificial features include a triangular pool with two rounded holes at the edge (about 2 feet wide) and rock monuments carved into the shapes of birds and turtles.

There are many mysteries and conspiracy theories about this landform and there has been a great deal of controversy over whether it is a man-made or natural creation or a combination of both. One theory is that the landform is primarily natural and over the years, as a result of strong water currents where the islands are based, the natural geological and geomorphological processes of erosion have created the features of the current terrace-like structure (Kimura, 2004, Schoch, 1999). Certainly, some structures in the area (such as the triangular pool and animal carvings previously mentioned) appear to be man-made, so there must once have been human inhabitants in the area. Another suggestion is that the formation is the remains of a lost civilisation of the Mu era [Note 3] which was once above sea level and that the Ryukyu Islands have since become surrounded by a deep sea typically around 500m in depth (Ancient Code, 2015, Christie, 2014, Dunning, 2016). Yet another theory is that Yonaguni Island was once (10,000 years ago) located close to the Tropic of Cancer (although over the years the centre point has shifted) and the monument and surrounding ruins served as an astronomically-aligned shrine (Schoch, 1999) [Note 4].

The mystery continues and more discoveries will have to be made in order to fully solve the puzzle of this ancient underwater landform and its civilisation. The Ryukyu Islands are very different in character from other parts of Japan and visitors can enjoy many interesting experiences during their visit. Not only those who enjoy diving but anyone interested in archaeology or the mystery and beauty of nature will have a memorable time visiting these islands. If you have the opportunity, why not dive in and experience this enigmatic ancient landscape as well as its tropical marine life for yourself?

A chain of Japanese islands located on the boundary of the East China and Philippine Seas, east of Taiwan (at N26 12’ 31” and E127 40’ 58”). Its history goes back to between the 12th-17th centuries, and many of the islands’ sacred sites and ruins from this era have survived (UNESCO, 2016).

[2] The size of the Yonaguni monument

[3] The Pacific civilization of Mu

The continent of Mu in the Pacific Ocean developed its civilisation 50 – 100,000 years ago and was known as the Motherland of Man (Churchward and Childress, 2007).

[4] The Tropic of Cancer

The Ancient Underwater City of Baia

The Missing Submarine: discovery of the M24