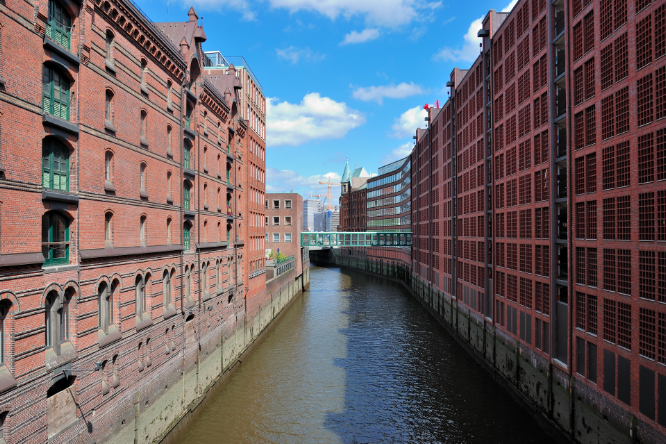 The former “duty-free zone” Speicherstadt is part of one of the biggest and oldest goods handeling centers of Germany and belonged to the old trading union of the “Hanse”. Now the “Speicherstadt” is UNESCO world heritage and a beautiful quarter of Hamburg to rest and linger.

In 1871 the “Hanse” city of Hamburg in northern Germany became a state of the “Deutsches Reich” – the German Empire. Before that, Hamburg was a free city even though it was a member of the “Deutscher Bund” a kind of loosely German federation. The 1871 Treaty was created to include Hamburg into several trading and taxation associations, but that also meant, that Hamburg had some trading duty to pay for the goods that where shipped at the port of Hamburg.  In order to not burden the shipping activity in the port with too many dutys, Hamburg needed a duty-free zone. So they agreed and started to build the “Freihafen” which is now known as the “Speicherstadt”.

It was very important to the businessmen of Hamburg, to keep the privilege to ship and trade duty-free. After all the so called “Hanse” union was quite an old and powerful international trading union that was not to be defeated that easily. But the “Hanse” is a topic for another article. Here I will tell you about the “Speicherstadt” and its outstanding architecture.

The Speicherstadt is some kind of a warehouse district and where the roads usually are, there is water. It was a district for the workers and craftsmen of the port. Later the people from other districts started to build summerhouses around the area. Things changed there rapidly and in 1888 Emperor Wilhelm II finally inaugurated the Speicherstadt. Before the beginning of the First World War, the whole district was completed.

The Speicherstadt is dominated by a gothic architectural style and made of clinker but also partly neo-renaissance style. In the Second World War about half of the building fabric was destroyed. After the war detailed rebuilding started and was completed in 1967. Almost all of it is true to the original. All the buildings are built on oak stakes. The buildings are on the one side connected to the water channel, on the other side connected to the road.

Mainly they stored herbs, coffee and tee in the total of five floors and transported the goods up and down with a big winch. The storage rooms where usually unheated and had a wooden floor. The temperature was pretty stable. Today the Speicherstadts usable area measures around 630000 square meters. Nowadays it mainly houses dealers and museums. The duty-free status of the Speicherstadt was nullified in 2003 because the whole port was restructured and modernized. But the port of Hamburg itself is also worth a separate article.

One of the museum I visited myself was the Hamburg dungeon. Although the term museum is a bit deceptive. The Hamburg Dungeon is something in between a museum and a tunnel of horrors. If you ever come to visit Hamburg, I highly recommend to visit that place. On the one hand one gets an insight into the history of Hamburg like the times of the black plague and the big fire of Hamburg. On the other hand they putted a huge effort to present it as entertaining and scary as possible. It is a bit like a horror- history amusement park.

Sometimes the Speicherstadt is reminiscent of Venice in Italy but there is no gondola to rent. Still it is worth a visit!

Uncovering the Mysteries of the Mameluks: Egyptian Vernacular Heritage