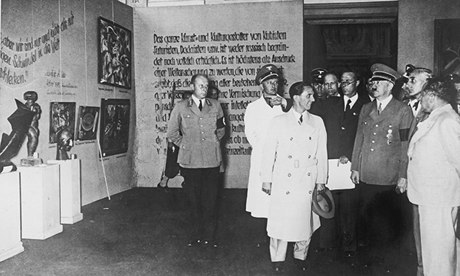 Hitler really hated Modernism, and tried to destroy the artistic output of this intellectual era. However, some of it still survived, and was discovered at a dealer’s son’s apartment in 2012.

Modernism and the notion of breaking away from conventionally aesthetic Victorian forms occurred in the mid 1900s through World War II. In Germany, during the reign of Hitler, which involved genocide as well as autocracy, the perception of Modern Art was contorted.

Hitler himself was interested in art, but after being rejected by Vienna’s Academy of Fine Arts, he adopted stern views about the structure and form of art, claiming that unconventional forms depicted humanity in deep filth. Hitler’s reign in Germany was despotic in the classical sense. Concentration camps and propaganda were the two main balls in the court, and Modern Art was subject to a contortion of public perspective. Exhibitions were held to defame the notion of Modernism.

The Degenerate Art Exhibition, which took place in several cities, began in 1937 in Hofgarten. The aim of the exhibition was to deem modern art and Jewish art, as a sham. A tall statue of a disheveled Jesus blocked the entrance almost completely, and the interiors were haphazardly maintained including paintings by abstract expressionists such as Paul Klee, Ernst Kirchner, and other eminent artists such as Kandinsky and Picasso.

The exhibition moved through several German cities such as Vienna, Salzburg, Weimar and Berlin. Prints, sculptures and paintings were featured, hung precariously on unkempt walls, only to insult the modern art work and its creators, resembling Hitler’s deduction of Modern art as a degeneration of modern art form. The whole era of the 1900s with respect to the evolution of art was viewed by Hitler as a generation of decay, and he really wanted people to see it in that way.

A lot of this exquisite and priceless art displayed at the exhibition, which consisted of up to 650 paintings, was burnt. Apart from this, book burnings were also conducted all across Germany. For instance, the Deutsche Studentenschaft in the same year (1933) organized an attack on the Institute of Sex Research in Berlin. A few days later, the Institute’s library and archives were publicly hauled out and burned in the streets of Opernplatz.

In early 1937, under the Third Reich, The Große Deutsche Kunstausstellung or The Great German Art Exhibition was organized to showcase art approved by the Nazis.

The main reason for Hitler’s contempt for Modernist art comes from his understanding of it as something that breaks away from the traditional notions of the pure Aryan a.k.a a pure German race. Anything un-Aryan was unholy to Hitler. Even jazz music was considered as degenerate in Hitler’s period of reign. Some paintings from the Degenerate Exhibition were sold off to foreign art enthusiasts, for a pittance, after the end of the exhibition.

However, it is interesting to note that during the exhibition, exaggerated prices were listed on these works of art, to dissuade people from subscribing to Modern Art as something to collect.

In 2010, eleven sculptures of the art that was labeled “degenerate” 70 years ago by Hitler’s Nazi Party and thought to have been destroyed in the lead up to World War II, were on display at the Neues Museum in Berlin.

In 2012, a treasure trove of 1,280 paintings, drawings, and prints worth more than a billion dollars, were recovered from an apartment in Munich, which led to the beginning of a new scope for exhibits of war heritage.

In 2014, New York’s NeueGalerie organized an exhibit of paintings displayed in the 1937 exhibition. These paintings, which could have been burnt during the World War, but weren’t, form an indication of the norms of Nazi Germany, since the perception of Modern Art was conceived by Germany’s concept of racial purity, enforced by Hitler.

Today, the value of the produced cultural capital has drastically changed since the World War II era, and now that gap is being bridged through the respect and acclaim that Modernist art deserves for its perception bending qualities.