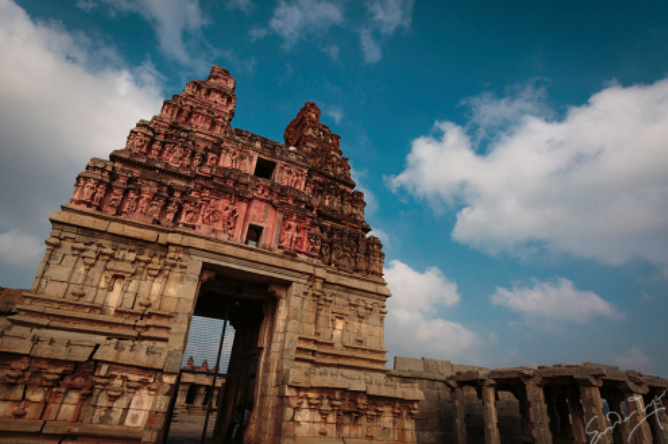 The Vittala temple is magnificent imprint of the extraordinary craftsmanship of the sculptors of the Vijayanagara Empire. The temple is said to have been built in 15th century during the period of Devraya 2nd; one of the rulers of the Vijayanagar empire . Many extensions were made and new structures added to it by Krishnadev Raya, the most famous ruler of Vijaynagar empire. The sprawling campus of Vittala temple consists of many halls, mandapams, gopurams etc., but the stone chariot and the hall with musical pillars are two of it’s crown jewels.

The iconic stone chariot at Vittala temple is very special in more than one ways. At the first glance it appears to be a monolithic structure but it is not so. The joints are hidden under the carvings and decorative patterns in such a amazing way that one has to devote considerable efforts and time to locate these joints. The stone appears to be sewed like silk by the amazing craftsmen of Vijaya nagar empire. This chariot is a shrine to Garuda, the vehicle of Lord Vishnu, who is the principal deity of this temple.

The shrine of Garuda is placed in front of the main hall where idols of Vishnu were placed, symbolizing Garuda carrying Vishnu. The chariot does not rest on wheels. It was built as a shrine on a high rectangular platform, but the wheels on the sides are set in the manner as if they carry the chariot. The wheels are complete with axis, shafts and brakes etc.

The mama mandapam lies behind the chariot. It consists of four halls, but the unique feature of Maha Mandapam is it’s exquisitely carved and sculpted musical pillars. There are fifty six such pillars. Every main pillar has seven small pillars around it. It is said that these minor pillars emit the sound of different musical instruments.

This Mandapam stands on very ornate platform which has reliefs carved in the form of horses. The entire Mandapam is divided into four halls, each facing different directions. Each hall has it’s own steps and entrance. The front, that is east facing, is the one with musical pillars.

The Speciality of this mandapam is it’s highly ornate pillars with yali, the mythical figure carved on every pillar. Yali is combination of three animals, usually  the lion, the elephant and the snake. Some interpret it as symbol of valour, while others look at it as protector to ward of evil forces.

Words really fail to capture beauty of Hampi. You have to see to imbibe the whole essence. The opulent architecture that one can find here is truly unparalleled.

Gaziantep: A gastronomic hub in Turkey

A visit to the Palace of Versailles