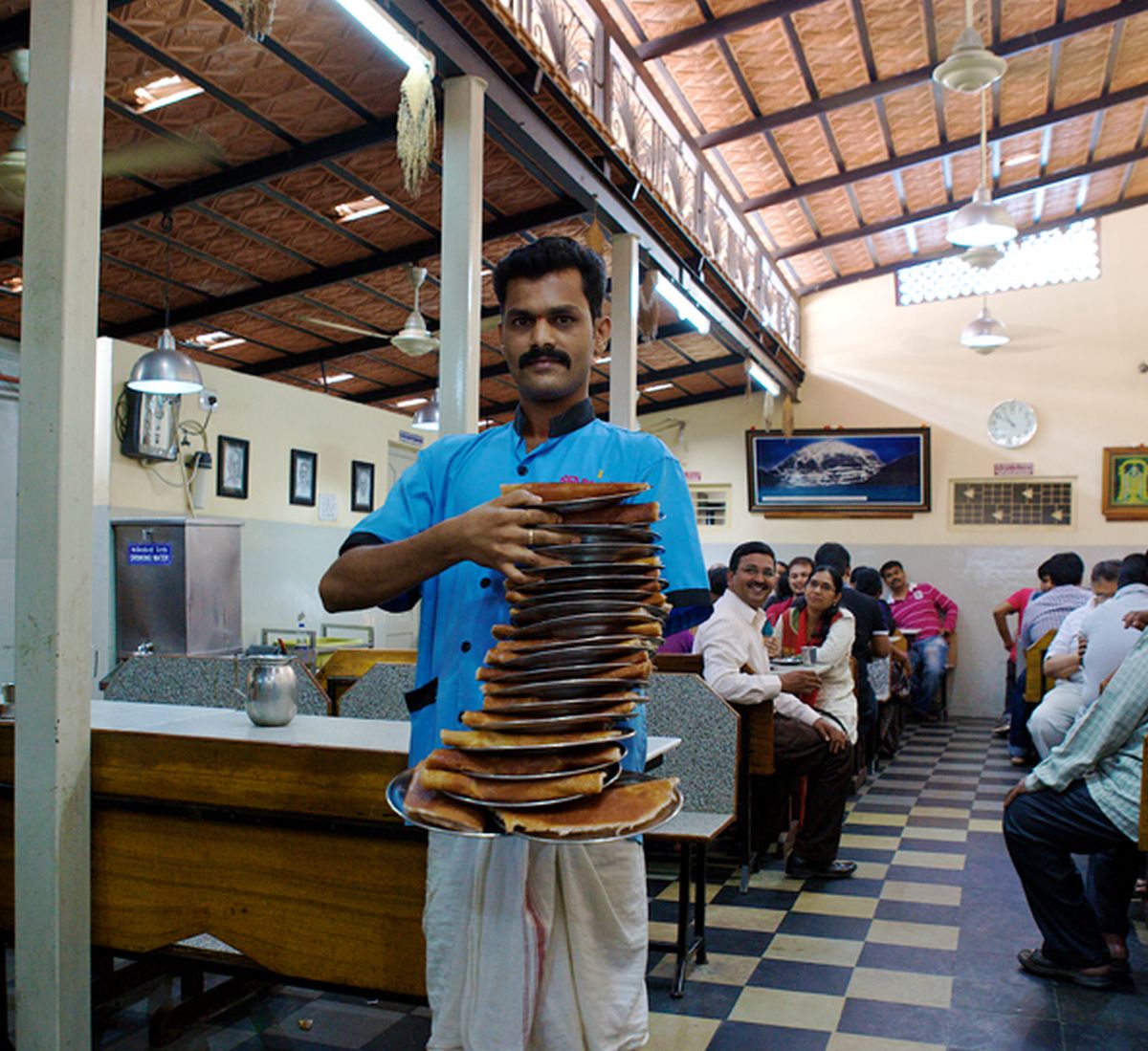 Bengaluru, with its 500-year old history offers glimpses of its heritage and culture with a blend of modernism. Bangaloreans love their authentic food and there are quite a few culinary landmarks in the city serving delicious typical south-Indian food. Vidyarthi Bhavan, a small student’s eatery and  a culinary landmark with a history of 73 years is just such an example.

Little did Venkatramman Ural (the first generation of owners of the eatery) hailing from a small village called Saligrama near Udupi know that a small eatery founded in Basavanagudto would serve the nearby college students would bloom into a flourishing family business.

After taking over the restaurant in 1970, Ramakrishna Adiga and his son ArunKumar (the second generation of owners) have been running the restaurant with the same name, traditions and recipes. Talking to the junior Adiga, who gave up his career as an engineer to take over the reins from his father, has given me an insight into how a common man can contribute to protecting the city’s heritage and culture.

What do you, as the owner of the place think the place has contributed to the city’s heritage factor?

As you would be aware, we are the second management running the show since 1970 when my father, Ramakrishna took it over from the founders, Mr Ural’s family — who were managing it since 1943.

The initial owner perhaps would not have thought at the time of its opening that this restaurant would go such a long way. It was opened to cater to the needs of students in the vicinity and gradually grew along with the time with sincere efforts from the founders/staff.

When the management changed hands, it was done with a good heart and intention and not just as a business. The same tradition with recipes and other processes has continued.

All these efforts that were put in the last seven decades by the management and its staff have resulted in what we are today.

The restaurant is still located in the original building, the front has not been altered, though the entire neighborhood has changed. We took a conscious decision of not altering. Some alteration work was taken up earlier to add more convenience for the building to be better-lit and more  ventilation. By doing this, this is still one of very few buildings in the area which still retain its heritage look.

Obviously, as an owner, I feel proud and privileged to be a part of this history.

What is the one thing about your restaurant (apart from the food), that attracts such huge crowds?

I have always been saying that it’s not just food that sets us apart. There have been a few other places where you get equally good or even better food. But it is that nostalgic factor this place has with many people over the years. I have seen people getting their children/grandchildren to this place and showing them the place where they used to sit and chat in their earlier days.

It has been one of those few places for them to relieve their memories and share it with the present generation.

The food is an added factor to share the nostalgia. The food that was famous in those days is still available.

Do you think that ‘Vidyarthi Bhavan’ has evolved from just a restaurant to a place of social and cultural relevance? If yes,how and what was the reason behind such an evolution?

During earlier days, when there was no internet or television, the communication happened in places where people would meet and exchange information and discuss the socio political happenings. Vidyarthi Bhavan, being in the centre of a market place, was one such place where people from various walks of life would sit and chat over various issues.

Thus, it become an ‘adda‘ (hub) for intellectuals to meet and discuss. There are a lot of people who can recollect their encounters with some literary/political bigwigs in this place.

Can u recollect a memorable incident by famous personalities or just a random customer?

There have been innumerable occasions where people (generally from abroad or outside Bengaluru) make it a habit to visit the restaurant, whenever they are in the city and have thanked us for still running this place.

Lot of famous personalities from various fields have visited us. But personally, I feel the visit of Dr Rajkumar (a famous film personality) in 2005 remains on top of my cards. It was indeed an experience to interact with such a humble person.

Do you think you should branch out to other parts of the city?

This is a difficult one to answer. In the present day scenario, it is very difficult for people to travel from one corner of the city to our place just to have food. Having a few branches across would meet their needs/requirements. Having said that, it is easier to open up branches, but a challenge to maintain consistency and quality.

We personally monitor the day-to-day activities in the kitchen and personally interact with our customers. This would not be possible to do it physically if there are more branches. But there are technologies to overcome this.