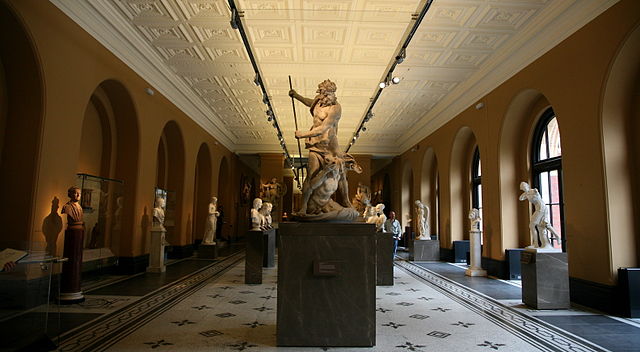 The Victoria and Albert Museum in London (known also as the V&A) is the biggest decorative arts and design museum in the world. It is one of my favourite museums, largely because of its eclectic collection. In the V&A there is something to suit every taste, from statues and columns that stretch, to the ceiling to delicate jewellery, from medieval paintings and tapestries to costumes from television, film, and theatre. The exhibitions are just as varied. During my last visit, just a few weeks ago, the three prominent exhibitions were on the culture of music in the 1960s, the engineer Ove Arup, and the history of underwear.

The history of the museum starts with the Great Exhibition of 1851, which was held at Hyde Park in London from 1 May to 11 October 1851. The Exhibition was the very first of a series of World’s Fairs that would eventually give the world the Eiffel Tower and the Royal Exhibition Building in Melbourne. The World’s Fairs were huge exhibitions at which countries from all over the world could show off their industry and culture, and were hugely popular with the public. The Great Exhibition, the first of these, was no exception, as one-shilling tickets were made available for the working classes.

The Great Exhibition was so popular that one of the organisers, Henry Cole, bought several of the exhibits to form the nucleus of a new museum of which he would be the director. Originally the museum was known as the Museum of Manufacturers. It was opened in 1852 at Malborough House, before moving later that year to Somerset House. The museum moved to its current site in 1857, and was named the South Kensington Museum. The current façade, distinctive for its red brick, was built from 1899 to 1909. The foundation stone was laid on 17 May 1899, and was the last official public appearance of Queen Victoria. It was at this ceremony that the new name for the museum, the Victoria and Albert Museum, was officially announced.

Whatever its name, the museum was innovative in a number of ways. It was the first museum in the world to provide refreshment rooms for its visitors, and also had visitor needs in mind when it installed gas lighting. Henry Cole wanted to ensure that the museum was open outside of working hours so that the working classes would be able to attend. This innovation continued into the 20th century as, in an effort to attract more young people to the museum, the V&A was the first British museum to hold a rock concert in 1973. Today, like all public British museums, entry to the main galleries of the V&A is now free (though some special exhibitions have paid entry). For no cost, the public has access to over 4.5 million objects in 145 galleries.

Throughout its history, from its origins at the Great Exhibition to the present, the V&A has been a museum at which people from all classes and levels of education are encouraged and invited to attend. Whether through cheap tickets, late night openings, or the recent development of free entry, the V&A has stayed committed to being as accessible as possible to the public. When I went the museum last year a large neon sign lit up the entrance space. This sign was part of an exhibition, and has now been removed, but I loved the sentiment it expressed to every person who walked into the doors of the V&A- even though the collection is held by the museum, ‘All of This Belongs to You’.

The One too Many Attractions of Islamabad