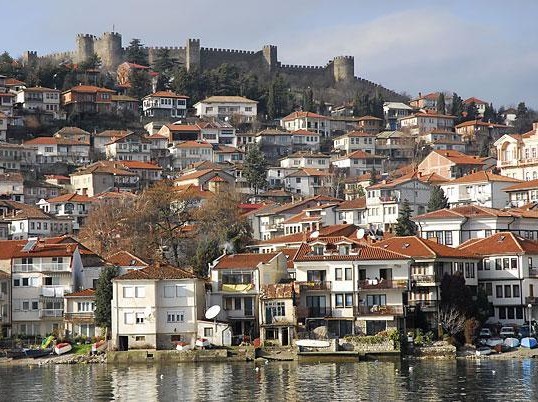 Speaking of vernacular architecture in Macedonia, I get many different images in my head. As small country, one wouldn’t think we can have diversity of architecture styles when it comes to the traditional residential architecture.

Traditional residential architecture represents significant part of the Macedonian build heritage. Especially, since they usually  are a part of the urban area of the city,  affecting  the urban planning of the cities and completion of the archaic city skyline. The development of the vernacular architecture went trough centuries under the influence of different natural, social, economic factors and brought outstanding creations showing diversity of styles, forms and decorations. In creative sense of conception of all the aesthetic, traditional and local factors, in correlation with the skill and activity of the Macedonian master-masons this architecture has reached its peak in the 19th century.

Towns in Macedonia were created from ancient times, but the architectural production that we know and consider as traditional dates from 19th century, the period the region was under the rule of Ottoman empire. The fact of people of two religions living in the same area, and different living habits resulted with two types of traditional houses.

One Islamic, build in large open areas, with large yards, surrounded with tall missionary build walls. Most of them built in two levels, ground and first since they had unlimited space.

Opposite of that, the Christian house is build on sloped terrain, very close one to another. They had to adapt to the terrain and the surroundings so that resulted with developing the building in height so the Christian houses are characterized with at least 3 floors.

After the general separation of the Macedonian traditional  architecture based on the religious factor, there is also, very interesting dividing of the architectural production, based on the location.  The main architectural traditional production is based in the following cities : Veles, Kratovo, Krusevo, Debar, Ohrid, Tetovo and Strumica. Each of them has its own characteristics that can be easily recognized and noticed.

One of the most representative and well preserved examples of this kind  are located in Krusevo and Ohrid, and will elaborate their concept and characteristics in the next paragraphs.

Located high in the mountains on a “natural amphitheater”, this town that dates back from the 15th century has many representatives of the vernacular architecture. Houses are located on sloped area, defining the urban structure of the town that exists today and its town panorama.
The topography of the terrain requires irregular city blocks and parcels. The houses are usually build in the back of their parcels, letting the yard be in front of them.

The construction of the houses is typical for thаt period. First floor is from massive masonry stone walls. Upper floors are from the traditional “bondruk construction” building with wooden construction which makes it easier to use that construction in creating exterior elements as “chardak” (closed balcony), balconies and interior elements. The fill that is used for this walls is mix from branches and mud with hemp, that is finished with lime plaster.

Considering the fact that the houses are located on a sloped terrain, it is suprising to notice that all of them have regular floor plan. The space organization usually is in 3 levels. Ground and 2 floors and there are two basic types of floor plan: symmetrical and asymmetrical due the disposition of the chardak and the main door.
The symmetrical ones, they characterize with high ground level where the actual entrance of the house is and plus one floor.
Spaces in the house are divided so on the ground floor we have the “winter spaces”, and on the first floor we have the “summer spaces”

Asymmetrical type of Krusevo house has 3 floors, Ground floor and 2 floors above them. Here they winter apartment is in the first floor, and the summer spaces are on the second one.

One characteristic about all Krusevo houses is that they have rich program of kitchen spaces : kitchen, summer kitchen, small kitchenette,”kevar”.
The houses of Krushevo are attractive with their looks, their facades and their texture, the roofs made by stone, natural coloring of the wood or its paints of blue tones. The gables were painted with floral decoration, a combination of zoomorphic and floral elements, architectural or mythological scenes. With their spacial, constructional and esthetically aspects they are considered among the most representative objects of the Macedonian city architecture. 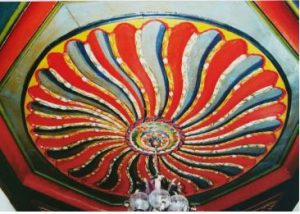 Besides the fortress and many churches that form the historic town heart, traditional house is also integral part of the architectural heritage of Ohrid.  Creating the urban morphology of the old town of Varosh between the fortress and the lake, there are many beautiful examples of traditional architecture that can be found in this town.

[/caption]The appearance of the traditional Ohrid architecture that we can see today was founded on the conditions and the construction abilities of the town population from the second half of the 19th century  and building materials that was limited to autochthonous natural materials as stone, wood and lime. Speaking of construction, in Ohrid we can find the basic  model of “bondruk” construction. Clear examples of stone walls that appeared in the basements/ground floors, rising to the first floor.

The stories and semi partitions levels were accomplished with the typical bondruk construction, timber skeleton that rises above masonry  stone walls for sometimes even 3-4 levels. Secured with trigonal forms  in the walls, fixed with rough thin cut boards from both sides, those wooden constructions bonded into a stable whole.  Like this, Ohrid builders were creating  thermos insulated walls, caused of the presence of walls with two screens and air between them.

Building on sloped terrain, in small area that they had between the lake and the fortress, the Ohrid builders had to use very small footprint for their house, but at least they had unlimited options in terms of height. Having a magnificent view to the lake was a must for every house, so that is one of the rules that was respected in the old Varos neighborhood and Every house had at least one floor that has clear lake view.

Organization of the spaces in the house is similar as the one in similar to the one in Krusevo. The difference that can  be noticed is that Ohrid house is divided on floors that are not equal on their dimensions. The higher floors are larger since the ground one. People form Ohrid build their houses like this becouse they had very limited space for their houses, so only way to expand it and get the needed rooms is to expand the floor plans.

The utility spaces are located оn the ground level, and the spaces for living are located on the first and second level. The second level is the more representative, the one with many windows, where are the spaces for guests are, and where we can find the most beautiful elements of interior design and decoration.

The general impression for the exteriors of the traditional town architecture of Ohrid’s most elite building achievements is that there was a strive for elevation of the stories, which at the front sides expended forward and were supported by projecting wooden beams (erkers), complemented by an effect in two colors: white on the facade walls, and brown on the single or horizontal rows of wooden window frames, which were balanced by an identical color harmony from the wooden entrance doors.