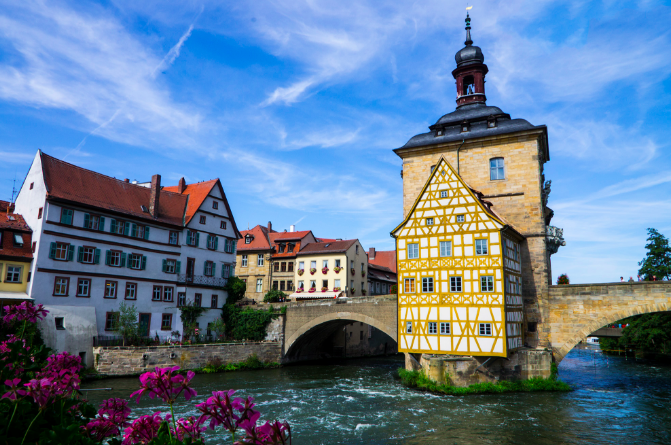 Thinking of Germany many foreigners have an image hugely influenced by southern parts of the country. But Germans do not all have blond hair, blue eyes and wear lederhosen, the famous pants traditionally worn in Bavaria. The same applies to architectural styles, particularly vernacular architecture. While the typical wood houses in the Alpine foreland and the Black Forest might be easier to recognize other building types have shaped German towns and villages more.

One month ago I visited Bamberg, a city of approximately 70.000 inhabitants, situated in Franconia, at the geographical center of Germany. While walking in the streets it feels like the city is almost entirely populated by students. In contrast to its population the towns houses and monuments are quite old. The city center has therefore be named a World Heritage Site. It features two architectonical styles that can be found almost all over the country. Fachwerk – half-timbering – started to be the most popular building style in Germany in high middle ages, more or less in the 14th century, and remained so until the beginning of the 19th century when the industrialization made it possible to produce and transport huge quantities of massive building material, like metal and stones. In the late 19th century, shortly after the proclamation of the German Empire, the whole country was beseelt by a positive spirit and Erfindungsreichtum. This epoch is called „Gründerzeit“ – founding time – and so is the corresponding architectonical style. While it can be mostly found in bigger cities Bamberg posses some splendid examples of it.

In contrast to „Gründerzeit” the term „Fachwerk“ makes direct reverence to the building material and construction process. „Fachwerk“ is believed to derive from the old German word for braiding. And basically it is a form of braiding when a Fachwerkhaus is build: A skeleton is constructed out of wooden bars. The spaces between the bars (Fächer) are then filled with a mixture of clay and wood braid or – later on – with masonry. The oldest timber framed house in Germany dates from 1262. Before that another technique wooden bars had been in use, the main difference to the Fachwerk being that the bars had been rammed into the ground, whereas the the „skeletons“ of Fachwerk buildings do always rest on a threshold. Nevertheless half-timbering had been used in Germany before the 13th century: Romans employed this technique in huge parts of their empire and examples have been found around the German limes. The famous Roman architect Vitruv mentions it in De Architectura, but he does not find a lot of positive to say about it: „As to wattled walls, would they had never been invented, for though convenient and expeditiously made, they are conducive to great calamity from their acting almost like torches in case of fire.“ Some of the prince-bishops of Bamberg shared his negative opinion, even though for different reasons: They simply found it unaesthetic! So while Bamberg still posses a huge number of traditional Fachwerk buildings, the number of „hidden“ half-timbered buildings is even bigger. The price-bishops decided to plaster a huge part of existing buildings and simply stopped building new ones.

Although Fachwerk buildings also had some stout defenders – among others Venantius Fortunatus, the bishop of Poitiers, who praised its windproof walls – the disadvantages remained numerous and when the industrialization made other building techniques possible Fachwerk buildings where no longer constructed and mostly disappeared from bigger cities. Today the historic center of most cities are dominated by buildings from the Gründerzeit or Jugendstil, the succeeding architectonical style.

While many Fachwerk buildings have been destroyed in World War II over two million examples survive, mainly in rural areas and are well looked after. There are even still some building companies specialized in constructing traditional Fachwerk buildings. Through these craftsmen and masons the traditional building technique, which dates back to the 13th century, survives to this day.

The Café Without Doors: The Pedrocchi Café

Delhi: Love is a Bridge between Two Cities