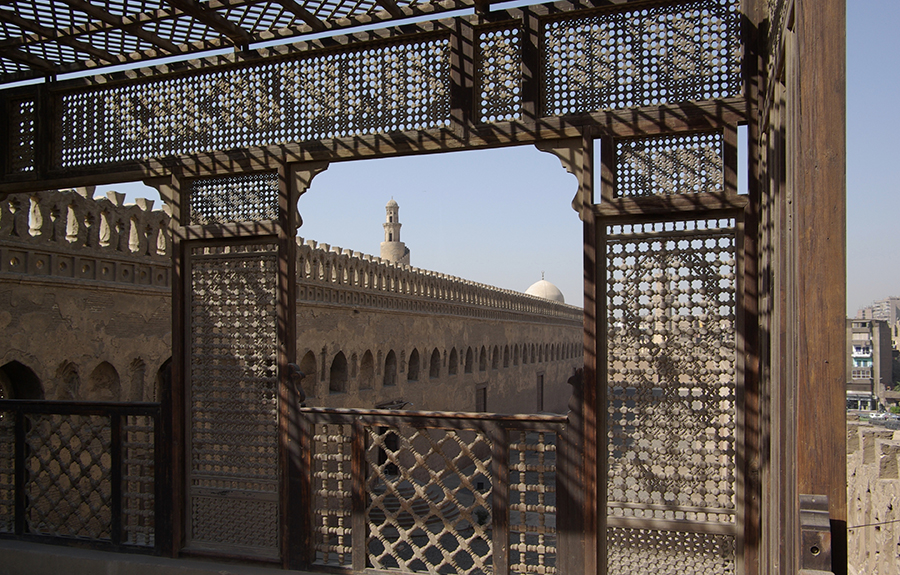 Cairo – one of world’s few continuously inhabited ancient cities has been home to the world’s greatest civilizations. Each of these in turn made the city their own and their monumental cultural footprints still astound visitors today. What interests and excites me the most in this city are the distinct architectural vernaculars that can be discovered throughout the city. The architecture of each period evolved to cope with Cairo’s hot, dry and dusty weather, and took full advantage of the Nile, which has always been the lifeblood of this city.

Being the largest Mameluk city in the world, I decided to focus on the architecture of the Mameluks, who were the dominant empire from around the 11th century to the 16th century in Cairo. Cairo is home to some exquisite treasures from this period, and I went to the Sayyida Zainab neighbourhood to discover its secrets.

The first thing that struck me is that mosques have always played an essential role in everyday life, which is why this is called the city of a thousand minarets. Islam was the state religion, and as a result formed the basis of culture and life under the Mameluks. The Mameluk period saw an unprecedented amount spent on buildings as many Sultans were patrons of art and architecture, resulting in the enormous architectural wealth of Cairo, their capital. The Mameluks built predominantly in stone, with wooden elements used for doors, door frames, and windows. Their communities were built around mosques, which used to double as madrassas (schools) for children. The most common plan for these structures was the four iwan (a rectangular space usually vaulted on three sides, and open on the fourth) plan, and they included a domed mausoleum for the building’s patron. Mameluk buildings generally were not symmetrical, and instead emphasized the use of balance in their architecture. This often extended to domestic dwellings as well. What strikes me most about Mameluk vernacular is its simplicity. A simple and functional plan combined with restrained, tasteful ornamentation utilizing the ablaq technique (alternating rows of light and dark stone), flowing muqarnas (a form of architectural ornamental vaulting) and calligraphy makes their buildings visually very appealing. Their domed mosques and wind catchers evolved as a response to Cairo’s intense heat, as a result of with both public and private spaces in Mameluk Cairo today are relatively cool.

Looking for a place to explore the domestic architecture, I enter the Gayer-Anderson museum, once the house of a foreign collector that today has been converted into a museum. This museum is the perfect place to analyse the vernacular architecture of the Mameluk period in Egypt. It is a complex consisting of two houses which in the 1930s passed into the hands of Major Gayer-Anderson of the British Army, who restored and used it to house his vast collection of antiques from around the world. The original structures were built by Hajj Mohamed Salem Abdel-Qader al-Haddad in 1540 and by Galmam al-Gazzar in 1642, and the recent preservation efforts have made it possible for visitors to gain unique insights into what life might have been like in old Cairo.

Positioned at the heart of the historic Seyyida Zeinab neighbourhood adjacent to the splendid Ibn Toloon mosque, the most striking externally visible feature of these houses are the elaborate mashrabiyya, the wooden lattice screens that allow the residents (especially women) to view the street without being seen themselves. Visitors enter through a doorway in the outer wall of the magnificent mosque of Ibn Toloon, and there is a narrow passageway between two houses that are connected by bridges on the floors above. Looking back through the doorway, the profile of Ibn Toloon’s minaret stands out against the sky, immediately transporting me back 500 years.

First I enter the reception room, which here is open to the sky. Brass bowls dating back to the thirteenth and fourteenth centuries line this part of the house, and a small pathway leads from the main door to the next. This is a common feature in Mameluk architecture and was used for visitors to place their shoes before entering the next room.  The house itself is divided into two parts, one for the family (called the haramlek) and the other for guests (called the salamlek), as was typical of domestic structures belonging to the high society of the time. From the entrance, one is led up through the reception room and the marble-tiled courtyard up into the haramlek. The courtyard is another common feature of Arab domestic architecture, and this particular one has a marble tiled floor with a fountain in the centre. A stairway leads to the haramlek above, and the large sit-out facing the courtyard indicates that it was almost like a private garden.

The various rooms of the house are connected by long passageways and stairways. Being a collector’s house, a lot of the rooms are dedicated to Major Anderson’s different collections, including artifacts from India, Turkey, Persia and Syria. The windows on the higher level are designed facing the wind to enable excellent cross ventilation which allows even the inner rooms, such as the harem and the studies (the reading and writing rooms of Maj. Gayer-Anderson) to stay pleasant during the scorching Egyptian summers. Mashrabiyya line all the windows in the harem, and their main function being to allow the ladies of the house to see what’s happening outside without them being seen. These were a common occurrence in Mameluk and the architecture of other Islamic empires as well. These intricately carved wooden screens were scavenged from other houses in the area which had been slated for demolition, making this museum an even stronger representation of the architectural vernacular.

A stairway leads by the harem and the collector’s rooms to the terrace, which is essentially a roof garden elegantly framed with latticed screens. This is my favourite part of the house; it commands a breath-taking view of the minarets of old Cairo.  Light dances through the screens, creating dynamic patterns on the floor and at the same time affording enough shade to make the terrace enjoyable. Terraces are a common part of the vernacular, as the hot and dry climate allows for flat roofs for the locals to enjoy the open air during the evenings and nights. 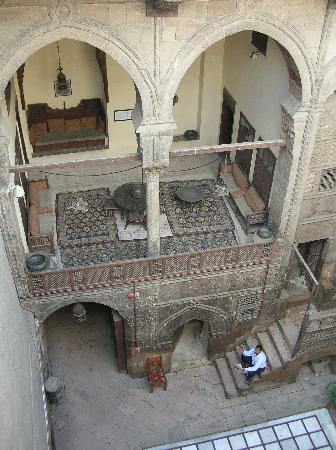 The best historic sites always have legends and myths associated with them, and this house is no exception. Legend has it that Noah’s Ark came to rest on this very spot after the great Deluge of the time, Moses was said to have communicated with God here, and the house and its occupants are said to be protected by a sheikh who is buried under the house. For anyone familiar with Egyptian history, legends and stories have always had an important role to play in society, and often dictated (and in some cases, still dictate) cultural norms and therefore the architecture of a community.

The most exciting aspect of architecture is that different cultures which lived in the same region in the same geographic and climatic environment developed such unique vernaculars. The Mameluk style is different that of the ancient Egyptian kingdoms, as they took advantage of the materials and resources available to create an architectural legacy that few empires rival. The vernacular of the Mameluks combines simplicity with intricate ornamentation and is regarded today as being among the most impressive periods in the development of Islamic architecture. While their vernacular takes climatic and geographic conditions into account, the Islamic Mameluk culture that played an essential role in everyday life is reflected in their architecture to the extent that their structures transport me back to Mameluk Cairo.

The Warehouse District of Hamburg– The Speicherstadt