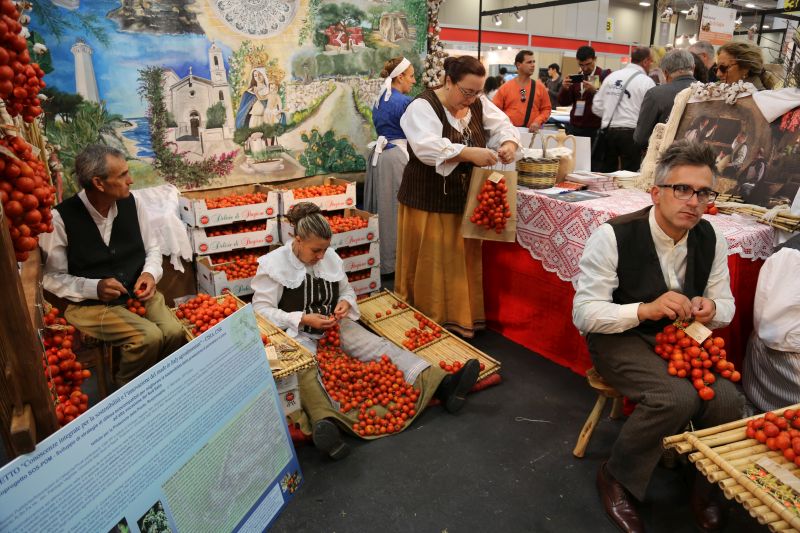 The region of Umbria is located in central Italy, and represents the only region in the central and southern areas with no access to the sea. Nestled among some of the most well-known and appreciated touristic regions of the country, Umbria has for a long time suffered the attractiveness of its famous neighbors, Tuscany and Lazio to mention the most renewed.

Nevertheless, this hidden, green gem in the heart of the country is no less than the green colli senesi, or the archaeologic treasures of Rome. Characterized by green sceneries and little countryside towns, the region conserves and promotes the values of slow life, sustainable tourism and agriculture, developing its attractiveness around one of the most appreciated Italian gastronomic traditions.

Summer, especially, is the time of the year in which the region uncovers its gastronomic treasures through its numerous food festivities. Umbria’s sagre di paese (literally, “town fairs”) are a must-do experience for those who appreciate the values of local products and the slow food philosophy, which contribute to the regional economy by attracting over a million tourists every year.

It is fair to say that Italy has one of the most renewed and appreciated food heritage in the world. With over 300 regional products awarded with different certifications of quality, a book would not be enough to describe the immense diversity of food heritage in the country.

Nevertheless, when it comes to food, not only the products or the production techniques are valuable: a relevant part of food heritage includes the process of celebrating and eating together, as quoted in the definition of the Mediterranean diet, inscribed as UNESCO Intangible Heritage in 2013:

Town fairs represent the perfect example of cultural aggregation through food consumption; people of all ages gather to organize these events that, in most cases, are entirely community-driven (with sponsorization of the local municipality); chefs, waiters and waitresses, cleaners and performers invest their time on a voluntary basis, where the compensation is the celebration of belonging to a community.

Country fairs are diffused all over the country, and, in most cases, they are specialized in a single product (yes, the local specialty of the town/municipality), proposed in many different menus: therefore, Umbria’s mountain green asparagus can be turned into a delicious roasted pork with hazelnuts and asparagus sauce, or a marvellous asparagus risotto (highlight of the green asparagus fair).

Every kind of product can be celebrated in food fairs: the only requirements are versatility to be proposed in different meal types, and to be a specialty of the territory.

Food fairs not only propose delicious menus with mostly local products: during the events, visitors will encounter performances, dances, music, game competitions and everything that can turn something as simple as a dinner in a real festivity.

For many little towns, suffering from isolation and depopulation, food festivities represent the highlight of the year: in these days (they normally last from one to three days), the whole town wakes up and brings its people together, no matter of what age or role, and welcomes both local and foreign visitors offering a unique insight into the town’s traditions.

Although food fairs are celebrated all over the country, the central regions of Tuscany and Umbria seems to be the most renewed organizers: perhaps, both regions are aware of the potential of food fairs not only in celebrating the local culture, but also in attracting visitors, tourism and prosperity in neglected areas.

Although most of the incomes deriving from food consumption are used to cover the fair costs, these events are, indeed, often used to promote territories which struggle to attract visitors year round.

Umbria has, therefore, developed a well established system of promotion: an entire website is dedicated to collecting information on all the fairs taking place in the region, mostly from May to September: thanks to the portal, people can keep track of the fairs and, in many  cases, get to know a place worth visiting that they probably would never otherwise know.

Some examples: Torchiagina, a small town in the municipality of Assisi (World Heritage Site since 2000) with only 601 inhabitants, becomes the centre of the province in July, during the roasted duck fair; or again, Montefranco (1,332 inhabitants), attracting hundreds of visitors during the wood-fired brick oven pizza fair.

Not only (excellent) food: conviviality, music, games, historic towns and an overwhelming feeling of being friends with everyone are the secret ingredients that make Umbria’s food fairs a real cultural experience, and part of the region’s heritage that is transmitted to future generations year by year with an a community engagement hard to find anywhere else.

Restoring Endangered Pagodas In The Land Of Morning Calm

Malga: A Symbol Of Shepherd Life in the Alps