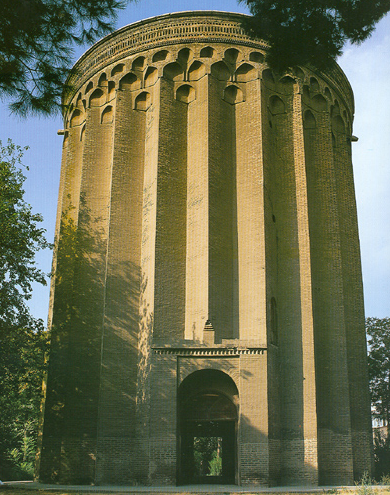 Mahdi 2004, defines traditional building as those kinds of buildings that were commonly in use in Iran one century ago. Traditional Iranian has maintained a continuity, the architecture is based on several fundamental characteristics; Introversion, structure, homogeneous properties, anthropomorphism, minimalist, symmetry and anti-symmetry. Iranian architecture has continuous history dating back to 5000BC and is marked by its cosmic symbolism, inventiveness and geometric balance.

The pre-Islamic styles of Iranian architecture draws on 3-4 thousands years of architectural development from various periods of Elamites, Achaemenids, Parthians and Sassanids were creators of greater architecture that over the ages has spread wide and far to other culture being adopted. Although Iran has suffered its share of destruction including the Alexander the Great’s decision to burn Persepolis, there are sufficient remains to form a picture of its classical architecture (Taghizadeh 2011). The Truss roofs, Diagonal roofs, Movable roofs, Vault, arch, dome and Squinch. Iran has also important architectural achievements; 1st structural such as high Colum with long distance between them example of Persepolis. 2nd innovation methods of building that form vault and was used for Parthian time. 3rd the innovation rectangular space in the dome and construction techniques that depend on creating new spaces.

One history building is the Tughrol tower, it is a 12th Century monument located in the city of Rey, Iran. The Tughrol tower is near the Rashkan castle. The tower is 20 meters tall and it is the tomb of Seljuk ruler of Tughrol Beg because of his interest in astronomy, who died in Rey in 1063. It is capped by a conical dome and the original dome of the tower collapsed following an earthquake. The Tughrol tower has six rectangles each representing 10 minutes and they are also very small grooves on them, showing the seconds. Any new position of the sun will change the shadows of these structures revealing the time.

Shafieiyoon & Najafpoor 2015 enlightens that there different elements that have had multiple functions in traditional building of Iran. There also different building materials that are used. Windward tower, Bricks, cobs and stones. Firstly the windward tower is a main feature among other elements it had advanced structure in order to improve natural ventilation in buildings. Windward tower by guiding the wind streams and using the natural, clean energy has had an important role in adjustment of temperature and reaching an appropriate temperature in residential places. Windward towers are innovative elements of traditional Iranian architecture. There of two types; purely functional and function symbolic windward tower. Secondly is the cob, it is one of the most important material in Iran which is highly resistance against heat and sound. Cob has got a pleasant and relaxing color and it comes in different types in addition to surface of the walls cob is also used in roof insulation (Shafieiyoon & Najafpoor 2015).

In the central region of Iran building are mostly lined with cob and make them more beautiful and decorated in this case it is called “arzeh” because of its color and its material decreases the sun heats especially in the desert regions (Shafieiyoon & Najafpoor 2015). Thirdly brick art continues to evolve in Iran across the Iran bricks form the skeleton of ancient building. The composition of today’s mud bricks is essentially the same as in the past they consists simply of mud mixed with straw found close as possible to the site (Petralla 1999)

Arches and Domes were the most important elements of Iranian building until the beginning of the 20th century. These forms are of the main features of traditional building in small cities and village in the neighborhood of the deserts. Arch are used to face the central courtyard of the building and they are also used to transfer the loads of the dome to the pillars. The arches are of different sizes and shapes and they have been assembled to fulfil this function. The domes are of different sizes as shape as well (Mahdi 2004).

Traditional Iranian architecture has maintained a continuity that although frequently shunned by western culture etc. nonetheless has achieved a style that could hardly be mistaken by any other.

Against the Forces of Nature: Tackling Floods with Resilient Vernacular Architecture in Chikwawa