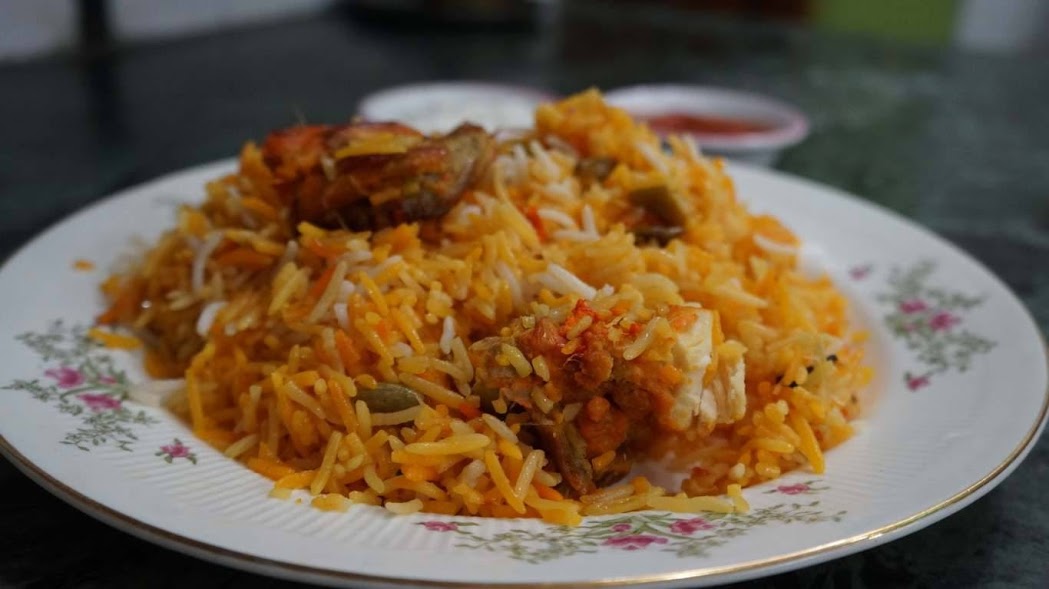 “One who fails to recognize the taste of Biryani is aloof of the food etiquette” ~ Mohd. Arif

India: a country of colors, flavors, and tastes intermingling to create a culture so diverse that it enthralls the senses of a person. Every custom, tradition, and cuisine have a story to tell, and a history to reflect on. In North India, the chief dish of every festivity is none other than the empress of the food empire: Biryani. It is a dish prepared with rice and meat /chicken accompanied with rich spices and aroma of saffron.

It is a dish prepared with rice and meat accompanied by a flavor of rich spices and aroma of saffron, kewda and roses. The long rice grains of Basmati rice play hide and seek in colors of saffron and white and the mouth-watering aroma that makes it an irresistible taste.

In the Indian subcontinent, the introduction of this delicacy can be traced back to the Muslim rulers in Hindustan. The word biryani is an Urdu word derived from the Persian language. One interpretation states the origin from birinj (the Persian word for rice). Another suggests that it is derived from the word biryan or beriyan, which means to fry or roast. Well-known historian Sohail Nakhwi states that its origin is traced back to more than 400 years ago in Central Asia. It was then people began adding meat to rice, thus resulting in a dish called pilaf or pulao and a precursor to biryani. It is also said that the Empress Nur-Jahan introduced it as the primary dish for soldiers for its multi-nutritional value.

The Delhi version of the biryani was prepared with a unique local flavor under the Mughals. They shifted their political capital to the North Indian city of Delhi. In present times, Old Delhi or Shahjahanabad city is the hub of Mughlai food. The lanes of old Delhi still house some of the oldest bawarchis (cooks) of Delhi. One such bawarchi khana is that of Mohd. Arif who operates Anmol Mughlai food point. Arif informs us of his Bawarchi business being more than 100 years old started by his great-great-grandfather,  Mohammad Ilahi Baksh.

Turning the pages back, Arif traces the legacy of this delicacy to a time when Delhi became the political center of the Mughals and biryani becoming a dish of festivity. He states it is a preparation that was cooked when one was born and even when one was mourned, during festivals like Eid, Moharram, Navroz, it is mandatory on every menu.

On asking about the specialty of Delhi’s biryani,  Arif said that “one cannot stop galloping biryani until their stomach pleads to stop.” Other versions prepared at his bawarchi khana included the Sindhi, the Hyderabadi, the Afghani variety; however, the Delhi style still remains the most popular.

The spices and condiments used in the preparation of Delhi style Biryani include ghee ( clarified butter), rice, chicken or/and mutton, green chilies, cardamom, cloves, ginger, garlic, kewda, and curd. The two important steps to keep in mind are adding yakhni( stock or broth) which is the base for cooking biryani and dum the procedure that involves cooking it on slow fire. The cover of the pot is sealed with a cloth and lid, this process traps the aroma and flavors of the pot.

Remember, Biryani is not just food; it’s an experience.

Inside the Beautiful Nizamuddin Complex Of Delhi