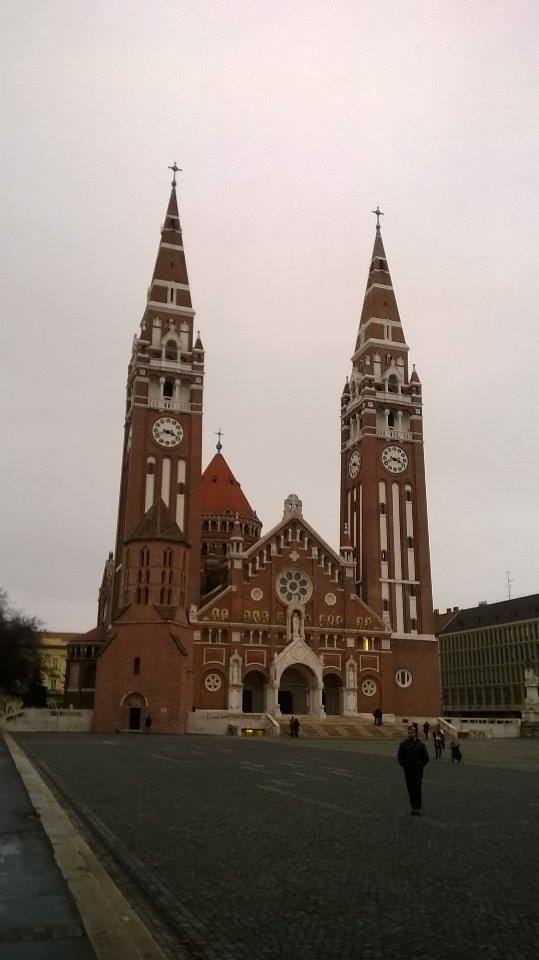 I will tell you a little-known story from a tiny town of a small country. It is the legend of a church and its mysterious tower. The above mentioned little town, Szeged, has a place which used to be seen as a sacred place. On this particular place, a great church stands in our days and other different churches stood in the same place all the time in history. The churches were sorely tried, they suffered badly from natural disasters and humans. The first church was built to the holy place in the 11th century in honour of Saint Demetrius of Thessaloniki, martyr (270-306), so it got the name, St Demetrius (Dömötör) Church. This church was destroyed in 1242, during the Mongol Invasion. In the next 150 years, the church was in ruins and in 1444 it got damaged again as an earthquake with a Richter magnitude of 8 shook the area. In the 15th century a new gothic church was built from the ruins. Destruction was the faith of the church during the Ottoman wars too when Hungary was reigned by the Ottoman Empire for more than 150 years. During that time, the church suffered like the oppressed nation. The building was partly ruined and Ottomans built its stones into the wall of the Castle of Szeged. After the Ottoman Oppression, in the 17th century German people did the same with the blocks of stones, moreover, they used the church as a storehouse. Until the 18th century the church was surrounded by cemetery. Between 1725 and 1749 Austrians built a new church to the sacred place, at that time in baroque style. With the new church, a new era started, people could hope that hard times disappear with the old church. But it did not happened like that at all. What is more, all of the calamities were only the beginning. A severe disaster was coming and it seemed to be more dangerous than the earlier ones. But this great catastrophe brought a great miracle in the history of the oldest relic of Szeged. 12th March 1879 was an unforgettable night. As Kalman Mikszath, famous Hungarian writer remembered ‘twilight couldn’t find Szeged anymore, only its ruins.’ Mortar should warn residents of the danger, but it could not, it was too late. Instead of it, the bells of the city hall and the churches of the town signalled the end of the town, but only an hour after the beginning of the danger. Szeged is a town at the banks of Tisza River. It might be as beautiful as now, but it was twisting and deadly dangerous. Residents always suffered from smaller or larger floods because of the lack of river regulation, but the flood on the 12th March 1879 was different. At that night, around 2 o’clock surging water flooded the whole town destroying everything in its path. It was the biggest and most destructive flood in the history of Szeged. Fortunately, it had portents, the danger was straw in the wind. And it saved thousands of lives. Everything started in December 1878 with a heavy snowfall in the Carpathian Basin what made the water level of Tisza River high. A storm on the 11th March made everything more serious. By that time, Szeged had been totally surrounded by water like an island. In the East, Tisza River flew. In the West, on the outer areas the ranches and meadows were already flooded. The dams at the western borders of the town couldn’t prevent the waves and broke through on. Finally the island sank. Many legends are connected to that particular night. Some of the legends are true while others are maybe not. As Istvan Tomorkeny, writer from Szeged wrote, ‘we cannot know surly how it occurred. Whenever people talked about the disaster, one person always knew better what happened I than another.’ By the way, it is said that a rumour spread in Szeged one hour before the flood. One man run through the streets shouting ‘the water is coming’ it created panic and saved lives. People were running panic-stricken, some people climbed onto trees as high as they could or tried to find shelter on the roofs while others went through the bridge to the other, safer bank of the river. Some people, who worked at the edge of the city, climbed onto trees and they were saved only 3 days after the beginning of the flood.

There are legends of people, who run back into their home in order to save some properties when the flood washed away the houses and their owners. Mothers tried to save their babies holding them high, giving them some more minutes to live. The freezing night was the ruin of numerous people who slept on roofs without blanket. The flood was cruel. Before it, 6800 houses stood firmly in the town, most of them were adobe houses. In the 3-4 meters high flood only 265 houses could survive. A liqueur and a match factory were in flames. People lost everything. 151 people died. And the flood didn’t want to leave. It stayed in the town for 186 days.

On the 17th March, Francis Joseph, Habsburg-Hungarian King arrived to the hit-area. The mayor of the town welcomed him disappointedly with the following words: ‘We lost everything, your Majesty’. But the king promised that ‘Szeged will be more beautiful than ever’. And in the darkest times, miracles begin. First of all, 35 countries helped Szeged to get rebuilt. The reconstruction could be started in 1880. And the promise of Francis Joseph started to become true. Szeged was getting more beautiful than ever.

In the same year, in November another miracle started when the aldermen of Szeged decided that they will build a new church as a pledge of escaping from future floods. But there was a big debate about the situation of the new church. Half of the citizens wanted the church situated in the sacral centre of the town. However, it meant that they should demolish St. Demetrius church, which maybe with the help of god, escaped from the devastation of the great flood. In 1903 the church was declared a historic building, that is why, the town had to find a new place for the new church. 35 competition works were made for the project, but the leadership of the town thought that none of them was worthy of the Votive Church. More and more people wanted the church to get built into the sacral centre of Szeged. The mayor managed, that the church officially was not a historic building any more. In 1907 the demolition permit arrived. Construction started in 1913. More hundreds years old crypts were found under the church, the corps were transported away. The workmen started to demolish the old church. However, only partly, since service was hold in the incomplete St. Demetrius church for 10 years. The headstone was put down on 21st January 1914, one week before the assassination of Franz Ferdinand in Sarajevo. And World War I broke out.

For 8 years, two incomplete churches stood next to one another. The town didn’t have enough money to continue the construction until 1923. To make the work faster, the old church was destroyed by explosions expect its tower, which was fortunately too near to the houses. Besides, people expected that they will find relics around it and they finally found. But it was something totally different and bigger than was expected. Inside the tower of the church, which nearly exploded, an other tower hided for many years.

The faith of the tower still wasn’t sure. Some people wanted to destroy it while others told this act would count as a ‘Christian barbarism’ since the tower was the oldest monument of Szeged. Its groundwall derives from the 11th century. The inner part was built in Romanesque style in the 12th century and its upper, eight-angled shaped gothic part in the 13th. Fortunately, finally, the tower got restored and renewed. Once it had 6 levels, now 3. It became a Baptising Chapel. The original entrance wasn’t found, so a new wrought-iron gate (Gate of Life) was built into the tower. Over it is situates a Stone Lamb made in the 12th century.

In 1930, 50 years after the residents took the vow, the oldest elect of Szeged – the tower, called Dömötör Tower – the votive church and the Square around the building complex were formally dedicated. The celebration lasted for 5 days. A Hungarian painter, Vilmos Aba-Novak painted new frescos inside the tower. The painter won a golden prize in 1932 with this painting in Padua on the Ecclesiology Exhibition. On the walls we can see John the Baptist, who is baptizing Jesus in the river of Jordan. On the right side, Saint Gerard Sagredo bishop is (980-1046) baptizing pagan Hungarians and on the left side the painting of the baptism of St. Stephen I (975-1038), the first king of Hungary is found. Besides, on the walls we can also find the figures of Saint Demetrius of Thessaloniki (270-306) and other Hungarian saints. Unfortunately, the frescos got damaged as the walls got wet because of the high groundwater level. The painter remade the frescos in 1933 but unluckily, it was not a long-lasting solution.

The Church bought the Tower in 2012 and it got renewed in the last year (2015). What is more, a new visitor centre was built to the old building and to the nearby Votive Church which has became the symbol of Szeged. Unfortunately, the Tower is closed for tourists, but thanks for the renovations the Tower became a very popular attraction and more and more people can experience its miracle.