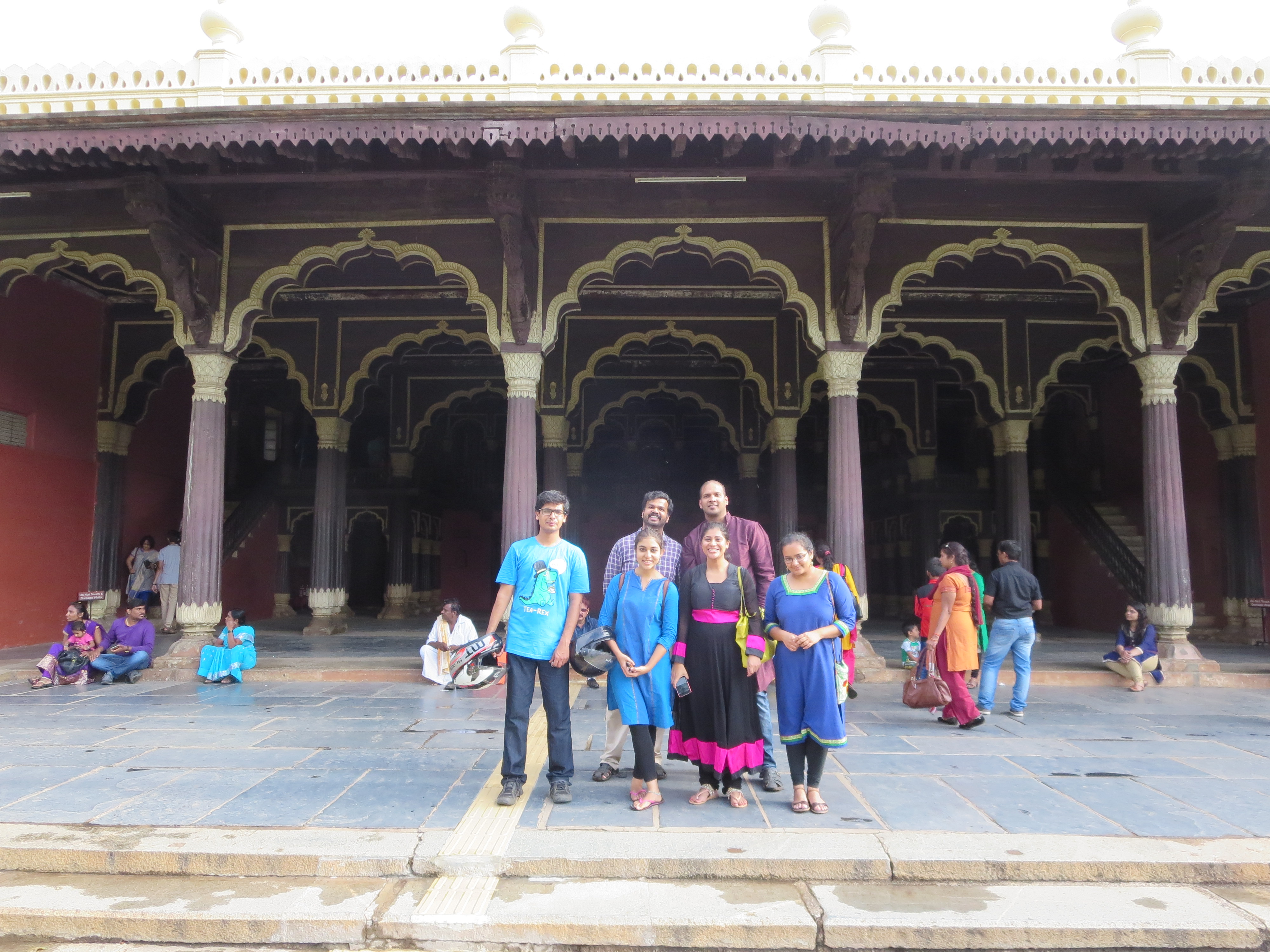 Bengaluru/Bangalore, the ever beautiful city, balances its modernity as well as preserves the ancient traditions and culture bringing together a beauty of its own. Hence the city is nicknamed as “Garden City” As a child who had lived in Bangalore, I had considered the city to be a replica loosely based on the European countryside, having beautiful arrays of avenues and boulevards adorning the residential areas. Even though so much has changed over the span of 20 years, the city’s love for preserving its heritage along with an ever growing modernism has been a most enchanting aspect. 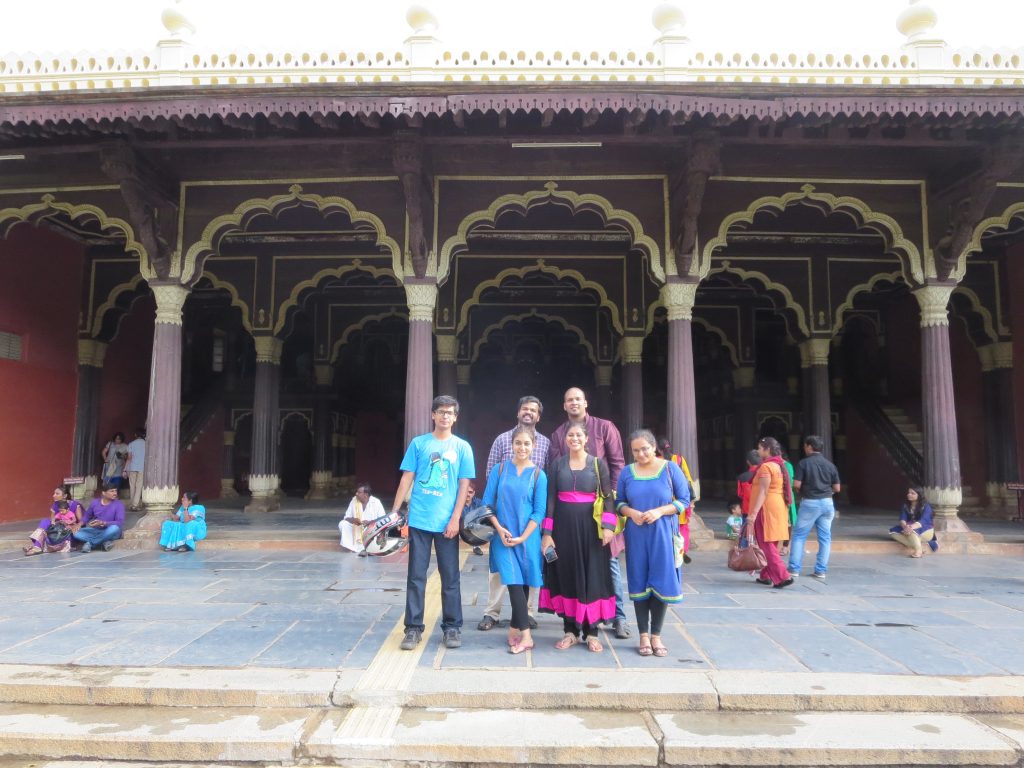 Tipu Sultan’s Summer Palace located in Bangalore, was the summer residence of the Mysorean ruler Tipu Sultan. Hyder Ali, Tipu’s father commenced its construction within the walls of the Bangalore Fort, but it was completed during the reign of Tipu Sultan in 1791, hence named after him. After Tipu Sultan’s death in the Fourth Anglo-Mysore War, the British Administration used the palace for its Secretariat before moving to Attara Kacheri in 1868. Today the government of Karnataka maintains the palace, which is located at the center of Old Bangalore near the Kalasipalyam bus stand, as a tourist spot.
As part of the #makeheritagefun initiative, a group of nearly ten of us assembled at the entrance of the building, to celebrate this event. As we entered, most of them who were seeing the place for the first time were slightly disappointed to see a small palace which was similar in size of a one storey building, but as we moved closer, a magnificent two storey structure revealed itself to us. Even though the palace was small, compared to the many other architectural ventures of Tipu like the Dariya Daulat Palace and Gumbaz Mausoleum at Srirangapattanam, it still had the capability to withhold our awe and attention.

The palace paints a picture of Indo Islamic style of architecture, but the structure is devoid of heavily adorned marble/red sandstone and rather this structure was built entirely of teak and stands adorned with pillars, arches and balconies. This uniqueness stands out, yet blends well with the whole architectural style. The palace was designed, keeping in mind, of the utility and necessities it needs to be a summer palace. As such, there are many rooms but they are smaller in size when compared to other royal buildings of his time. Overall there are four small rooms in the corners of the first floor which were used to as Zenana, (Ladies Quarters). Also there are balconies on the eastern and western part of the upper floor. These balconies were used for conducting durbar (court) during Tipu’s stay at the palace. The palace might be a small structure, when compared to its other counterparts, but Tipu has made sure it stands out with the help of elaborate and intricate designs carved on the wooden arches, pillars and balconies. Beautiful floral motifs are embellished on the walls of the palace. It was as if all the walls and pillars had a story to say to all those who wished to hear. I felt like I was being drawn into them each telling me how they came about and what each of them witnessed in this glorious palace. As I moved as a seemingly silent spectator of the grand show the palace put up, I chanced upon a painting of a grand throne visualized by Tipu Sultan himself, coated with gold sheets and stuck with precious emerald stones, apparently Tipu had vowed never to use it until he completely defeated the English Army. The tragic death and defeat of Tipu at the Fourth Anglo Carnatic War, led to the shattering of this dream of his, ultimately the throne was sold part by part on an auction by the British. As we were so excited seeing the designs and patterns on the pillars we literally ran up the stairs to have a good look at it, hence we chose to see the highly anticipated artefacts that belonged to Tipu in the later part of our tour. On the way down the stairs we come across an inscription on the adjacent wall, which in brief can be quoted as “The Abode of Happiness”. And under these stairs, the artefacts were housed in the rooms that are located on the ground floor of the palace. The rooms were converted into a museum, so it facilitates to the need of the artefacts housed there. The displays are few in number, and most of them are replica of the original, (the original being housed at the Victoria Albert Museum) but whatever that has been displayed are eye catching artefacts of Tipu. For example the life size 18th century automaton of tiger eating a European man and the swords used by Tipu are some of the interesting artefacts.

The wonder of the palace just doesn’t stop with the palace structure; its beauty is brought to the brim with the well laid garden and lawn that surrounds the whole structure. At present the garden is maintained by the Horticulture Department, Government of Karnataka. The rains had bestowed upon us with such wonderful climate, that I still roamed around the palace and garden even after everyone left , taking in all the beauty it shone on us. Every step I took around the palace I could feel as if Tipu Sultan was standing at the entrance beaming with pride and expecting an appreciation note for this marvelous structure.