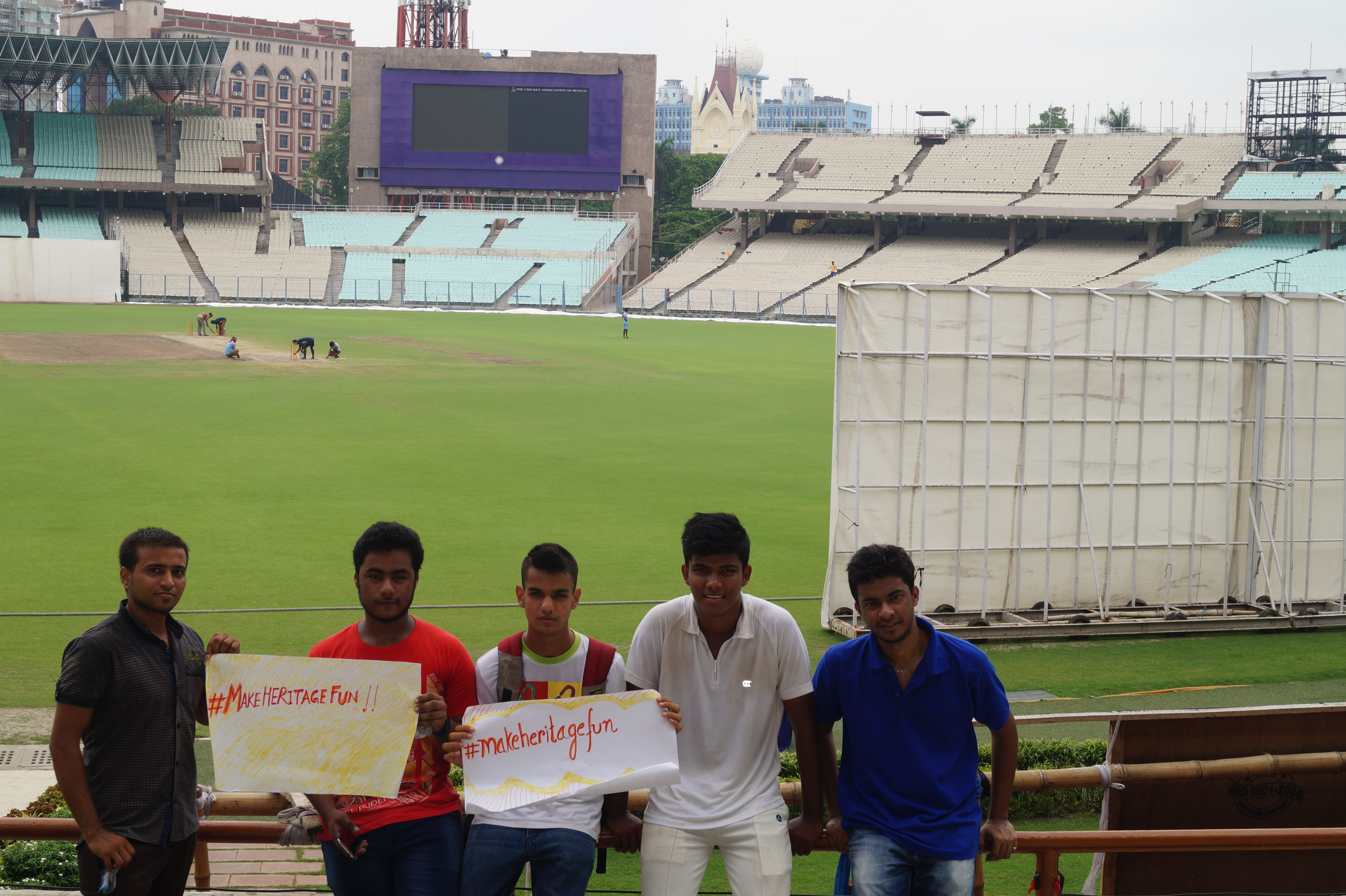 An article by Abhimanyu Sengupta on his jaunt around the Kolkata Maidan as a part of #makeheritagefun:

On the 12th of June, on a cloudy Sunday morning, a group of young cricketers and some students met in front of the Victoria Memorial in Kolkata to go exploring the Maidan and its neighbouring sites. We were a team of six – Kasturi Basu, Ishan Bakshi, Siddhartha Roy, Biswanath Manna, Aditya Kumar, and me.

The Victoria Memorial is familiar to most Indians – it is a well-known heritage site of Kolkata and one that has been covered numerous times. The Maidan, on the other hand, is less known, but it is an important part of Kolkata’s history. So when I learnt that GoUNESCO’s #makeheritagefun events gives us the freedom to pick our own sites to cover, I didn’t hesitate in choosing the Maidan.

I am 16, and I have been playing cricket for the past four years. Every weekend is spent training in one of the many cricket clubs on the Maidan. So this was a great opportunity for me and my mates to explore and discover the many stories behind this place. Our plan was to talk to coaches and players as well as local streetfood vendors about the area. We’d then walk along the historic Red Road which was used as a landing strip by fighter planes during World War II. Finally we’d cover the Eden Gardens, The second largest cricket stadium in the world where many historic games have been played, including Sachin Tendulkar’s last international Test match.

The Maidan is a large stretch of grassy land that has existed since the British era. Many clubs were built on this ground for British officials – places for them to relax and unwind as well as participate in different sports. Decades later, the clubs still exist and the Maidan is a hotbed for sporting activity. There are over 50 clubs spread across the grounds. We play for Dalhousie Athletic Club, which was established in 1880. Some big names include clubs like Mohun Bagan, East Bengal, and Mohammedan Sporting, and the Bournvita Cricket Club. All clubs on the Maidan have tent-like structures, because the legal owner of the Maidan – the army – disallows any permanent structures.

We then walked along tram tracks towards the north side of the ground. A clackety-clack sound made us turn around. A blue-and-white tram trundled past us snaking through under trees. Kolkata is one of the few cities left in the world where trams are still  viable means of transport. Trams have been operating here since 1902. According to Wikipedia, Kolkata tram are the oldest surviving service in Asia. This stretch through the lush greenery of the Maidan is the most scenic route. It’s lovely to see a tram moving in a stately grace through the edge of the Maidan, past cricket matches and snack-sellers, with the silhouette of the Victoria Memorial as a backdrop.

We came across a thicket of trees which allowed little sunlight to pass through. We later found out that this area was once a tiger-infested jungle and surrounding it were swamps, paddy fields and bamboo groves. It is hard to imagine that the Maidan was once a dense forest with tigers in it.

An under-14 match was underway at the Bata Cricket Club. A quick chat with the coach revealed that it was started in 1952, and was originally an office team for the Bata shoe company. Today, it has a second division cricket team and a first division football team, and a cricket academy with over a hundred kids training every week. The coach said the secretary of Bata  is also the secretary of the club.

It was 11am now, and getting quite hot, but we pushed on excited about everything we had discovered and everything that was to come our way. But first we stopped by a street vendor serving nimbu pani (lemonade). While we were gulping our sugary drinks, we asked the street vendor a few questions about his life around the Maidan. He said he has been serving drinks to people here for 40 years! He started when he was just a boy.

We continued our journey towards Red Road, but on the way we made a quick stop at the club where we train – DAC (Dalhousie Athletic Club). Our coach talked about the days he played cricket here as a youngster. He told us British officials used the club to relax and unwind. The club had a rich sporting history, actively participating in CAB (Cricket Association of Bengal) tournaments, as well as football and tennis tournaments.  “The Maidan means a lot to me. I first trained in Mohammedan Sporting under Munawar Ali. He passed away about two years back. I dedicated the academy to him, naming it MAMCC (Munawar Ali Memorial Cricket Club). This ground is like a second home to me, it has given me so much. It has provided me with my bread and butter, it has taught me self respect and I have come to know many great individuals through this great sport. I feel for every sports person, this ground is a very special place”.

After thanking our coach, we hit Red Road to take pictures of this huge stretch of tarmac which was used as a runway for fighter planes during WW II. As we walked along the Red Road, I recalled the stories Dadau, my grandfather, used to narrate. He had trained as a pilot with the NDA (National Defence Academy). He would talk about the times when the threat of a Japanese invasion loomed large over the city and the sight of planes in the heart of Kolkata buffered the morale of citizens. Kolkata was bombed by the Japanese in December 1943. Dadu said they had to use black tape to cover up all windows and used to watch out for air raid sirens.

After a long trudge via RedRoad, we entered the mecca of Indian cricket – Eden Gardens. We were in for a pleasant surprise as a first division match was going on between Mohun Bagan and Bhowanipore Cricket Club. It’s every budding cricketers dream to play at Eden Gardens, and every one of us was in a state of awe, taken in by the sheer size and beauty of the ground. Above me hung a banner of the Mohun Bagan Club, which read ‘History, glory, tradition’. The same could be said for Eden Gardens as well. Over the past few decades, this stadium has seen many epic battles being fought – Rahul Dravid and VVS Laxman battling for days to save a test match and emerging glorious. Sachin Tendulkar’s final test match and Rohit Sharma’s majestic innings scoring 264 off just 173 balls, was the highest score by any batsman in an ODI. All of these hallmarks were hosted by this great stadium and even as I write this article, Eden Gardens is getting ready to host yet another milestone in Indian cricket. In just a few days from now, the first ever day-night test match will be hosted at the Eden Gardens with a pink ball! The match will be played against two first division teams, Mohun Bagan being one of them.