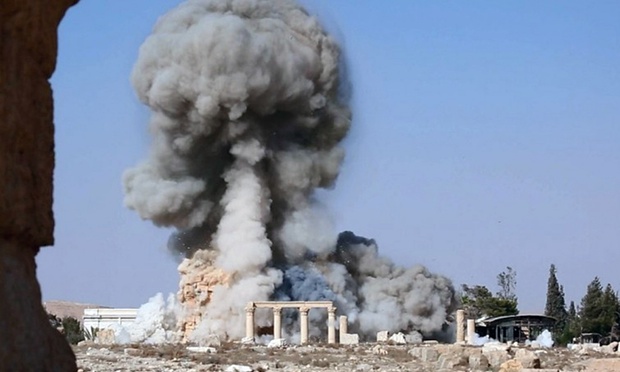 United Nations on Monday confirmed that the Islamic State destroyed Palmyra,a 2,000-year-old city described by UNESCO as “one of the most important cultural centers of the ancient world”. Thousands of years of history turned into rubble in few seconds. While all factions condemned the attack, the event has brought to light the vulnerable situation of world heritage sites in conflict zones.

“According to UNESCO there are 10 world heritage sites in Syria and Iraq. Of those 10, it says nine are currently in danger – and not just because of Islamic State vandalism”.

While steps have been taken to conserve, protect and safeguard these heritage sites, but the situation is rather stark. A third of the United Nations World Heritage sites valued for their geology, biodiversity or natural beauty are in severe danger. And 8 percent of all the sites—including Everglades National Park in Florida—are now considered to be in critical condition, according to an assessment from the International Union for Conservation of Nature.

When a site is inscribed on the List of World Heritage in Danger, it allows the World Heritage Committee to allocate immediate assistance from the World Heritage Fund to the endangered property. It also alerts the international community to these situations in the hope that it can join efforts to save these endangered sites. The listing of a site as World Heritage in Danger allows the conservation community to respond to specific preservation needs in an efficient manner. A program has also been adopted in consultation with state party for corrective measures and to restore the site in order to remove it from the list.

Deleted from the World Heritage Sites in 2009, The case of the 18th century cultural landscape of Dresden Elbe valley, sets out the perfect example of how if the sites are not protected and managed properly. The removal came on the basis of the Waldschlösschen Bridge that was under construction since 2007 which would bisect the valley and take away the universal value from the site. The point to be noted here is that one A site gets deleted from the list; Not only do the sites get deleted from the world heritage list but immediate assistance from World heritage funds also stops.

Below is a brief description of 3 world heritage sites in danger, which if aren’t attended to properly face the danger of being taken off from the UNESCO’s list.

However, the degradation of the site has continued.  Water inflows have been reduced by up to 60 percent and nutrient pollution increased to the point where the site is showing significant signs of eutrophication, loss of marine habitat and a subsequent decline in marine species. If the corrective measures aren’t taken seriously, the site may well be taken off from the list

“Current threats related to reduced water flows, water pollution and shifting habitat are affecting the health of the site and the amount and quality of habitat,” the assessment notes.

UNESCO has asked Georgia to adopt an integrated management plan for the sites and address problems related to the “serious deterioration” of the stonework and frescoes. Other issues of concern included the management of land near the churches and loss of authenticity due to work carried out in the buildings. However on the brighter side, the Georgian government recently has informed UNESCO officials that all new constructions have been stopped in the area and the country hasa plan to properly preserve the city and its historical monuments.

In June, UNESCO director-general Irina Bokova expressed dismay over reports that three sacred tombs at Timbuktu had been destroyed.”There is no justification for such wanton destruction,” Bokova said in a statement, “and I call on all parties engaged in the conflict to stop these terrible and irreversible acts.”