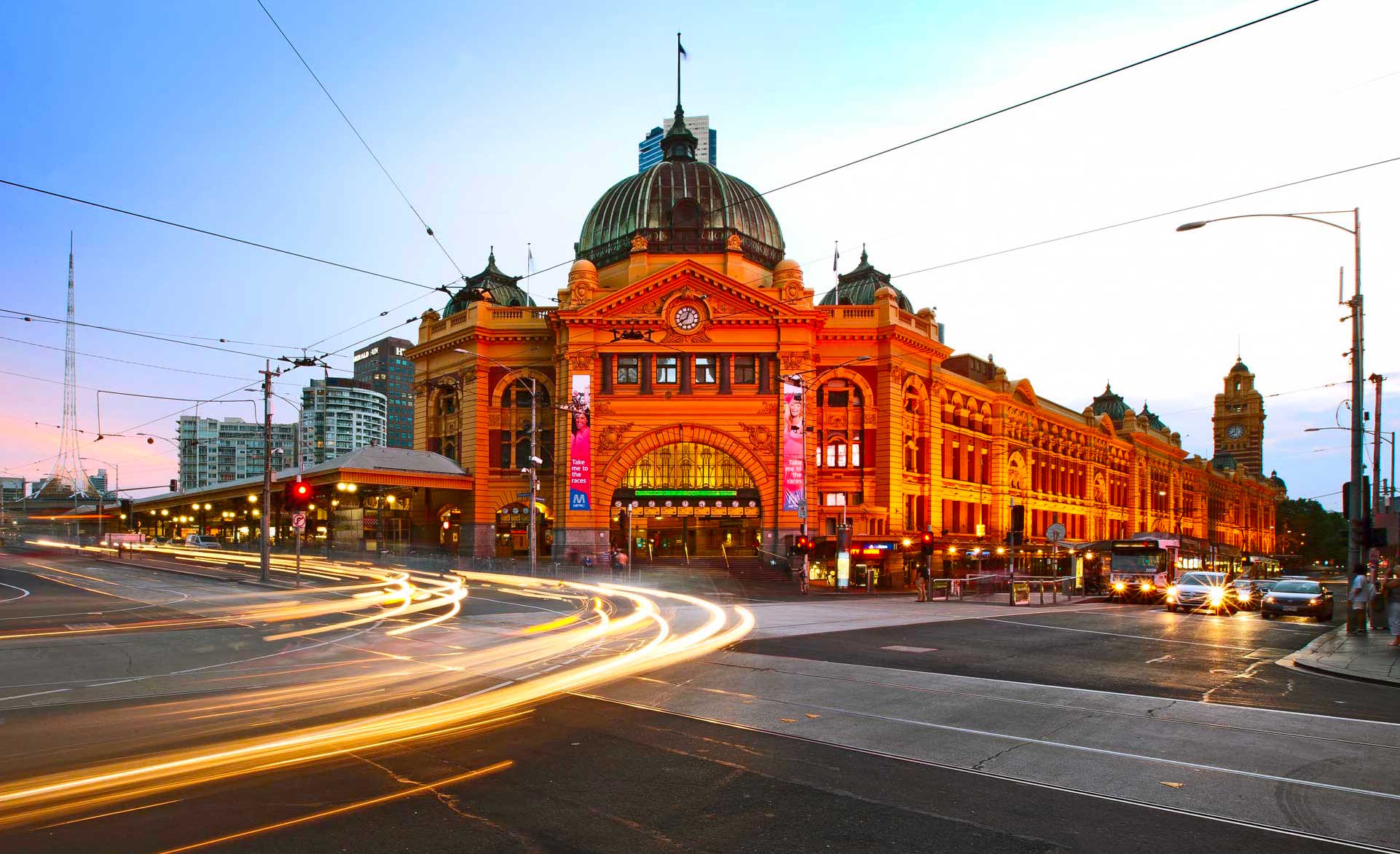 Flinders Street Station is the oldest train station in Australia, and still the centre of the Melbourne’s metropolitan rail network. The station, with its iconic clocks and dome, is a beloved symbol of the city, and the busiest station in Australia. But of the 110,000 commuters who move through it every day, how many realise the grand history of the site?

The original station was built in 1854, as Victoria was still riding the boom of the Gold Rush. The station, called the Melbourne Terminus, was simply a number of sheds and one thirty-metre-long platform.

Two other stations opened in the city five years later, at Spencer Street and Princes Bridge. Originally none of these stations were connected. Today, Spencer Street Station is known as Southern Cross, and is connected to Flinders Street Station as part of the City Loop. Princes Bridge station was eventually amalgamated with Flinders Street station, becoming platforms 14, 15 and 16. However, this section was demolished during the construction of Federation Square in 1998-2002.

By the 1890s Flinders Street Station had three platforms and it was time to construct a more permanent station building. After a decade of discussion, a competition was finally held in 1899 to design the new station. JW Fawcett and HPC Ashworth won the competition with their design based on French Renaissance Style. Both railway employees, it was the only design the two are known to have worked on together.

The new station building finally opened officially in 1910.  As stone was considered too expensive, it was built in a red brick with rendered detail, giving the building the distinctive red and yellow colour. The clock tower and high dome designed by Fawcett and Ashworth had been created, as had the arched roofs. Though the Railway Commissioners had made modifications to the building, it was and still remains an impressive design.

‘Meet me under the clocks’

The most famous area of Flinders Street station is the row of clocks at the front entrance. With one clock for every train line leaving from Flinders Street, they display the next train’s departure time. Originally these clocks had to be manually changed an average of 900 times a day by a railway worker holding a long pole.

In 1983 plans were made to replace these clocks with digital displays, but there was such a flood of outrage from the public that the plans were retracted within a day. Today, the clocks are operated automatically, and you can find digital displays inside the entrance.

The stairs under these clocks are a popular meeting place for Melburnians, and have been for generations, and has resulted in the common idiom ‘I’ll meet you under the clocks’. It is also the home of a small store called ‘City Hatters’, located just beside the stairs. The store, which may go unnoticed to many, is as old as the station itself. Opening on that location in 1910, it has been selling men’s hats ever since.

At one time the building included meeting rooms, a ballroom, and a crèche. Perhaps it was because the building’s designers were railway workers, but the third floor also contained extensive facilities for railway staff, including a private gym, lending library, and even a running track on the roof. These rooms are now largely abandoned, and have been since the 1960s.

The treatment of the ballroom has been subject to particular criticism. Shut down in 1985 to prepare for a refurbishment that never happened, the ballroom is now locked off from the world by gates and padlocks. Decorations are falling and plaster crumbling, but very little is being done despite much talk at all levels of government for many years.

Design competitions have been held to revitalise the station, the most recent in 2011. The winner, Swiss architects HASSEL, Herzog & De Meuron, reimagined the station in a design based on London’s Tate Modern, and caused much discussion and controversy with their plans.

Thankfully, the station is currently undergoing an urgently needed refurbishment and maintenance works, at the cost of $100,000,000. This will include waterproofing the roof and improving commuter facilities. However, there appears to be no plans for the redesign to go ahead, or the abandoned rooms to be reopened. Though the station remains a hub of Melbourne life, it remains to be seen whether it will ever be restored to its full glory.

Porticoes of Bologna: Arches With 1,000 Years of History