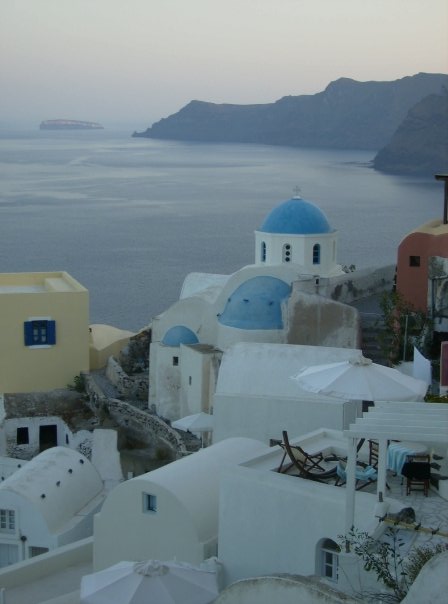 The Cylcades Islands are a small group of islands, clustered together in the Aegean Sea of Greece. The name ‘Cyclades’ is derived from the Greek word “kiklos“, meaning circle, and was given by ancient geographers to describe the circular array of the islands around the sacred island of Delos. The whole area is flooded in a wealth of ancient history, of natural and diverse beauty. Interestingly, it also co-habits a modern and distinctive architecture.

While colored houses of earthy shades -in the Polygnotan color scale– rest in many other parts of Greece, Cyclades Islands are comprised of only white architecture. The rocky and barren landscape of these islands makes the white buildings stand out, and shimmer like jewels amidst the gray fields. Their white-washed walls, wooden colorful balconies, hang over the narrow, labyrinth cobble-paved streets. The courtyards are beautifully decorated with pots boasting of colorful geraniums and fragrant basil, and enchant visitors from all over the world.

If you pay attention, you will notice that the architecture shapes in the Cycladic islands vary from one building to another. If the residential houses have horizontal white roofs, the churches exhibit red, ocher or blue domes. Most of the famous Aegean settlements have been developed amphitheatrically in hillsides overlooking the sea, while other white-washed villages rest in the center of the islands, enmeshing with the rocky landscape.

The main material that was used for the whitening of the walls was lime, an inexpensive local material, which served as a disinfectant for its anti-microbial properties. It is believed that Ioannis Metaxas, a former Greek general and dictator, was responsible for propagating the whitewashing of the Cyclades with the use of lime in the 1930s, in order to deal with the epidemics of that time.

However, the white color was re-imposed later, mostly for blue-and-white aesthetics –same as the colors of the Greek flag- during the military dictatorship of 1967. After all, mandatory bleaching continued even after the dictatorship, till today.

Before the current development of urban architectural culture, locals in islands, such as Oia in Santorini, have witnessed the wide use of colors such as intense red, brown-red, warm ochre, transparent cyan, a little white, light blue, brown.

But, it is still a mystery as to what really caused the prominence of white in their architecture, which still continues to dominate, and is an interesting research topic, but in no way, can be blamed as a result of a fascist intervention.

However, the white of the houses in combination with the blue of the sea, as seen represented in the Greek flag, re-emphasize the importance of the Greek Cycladic islands’ history and culture, and stand in solidarity with ancient Greek architecture

The History of the Belgian Waffle