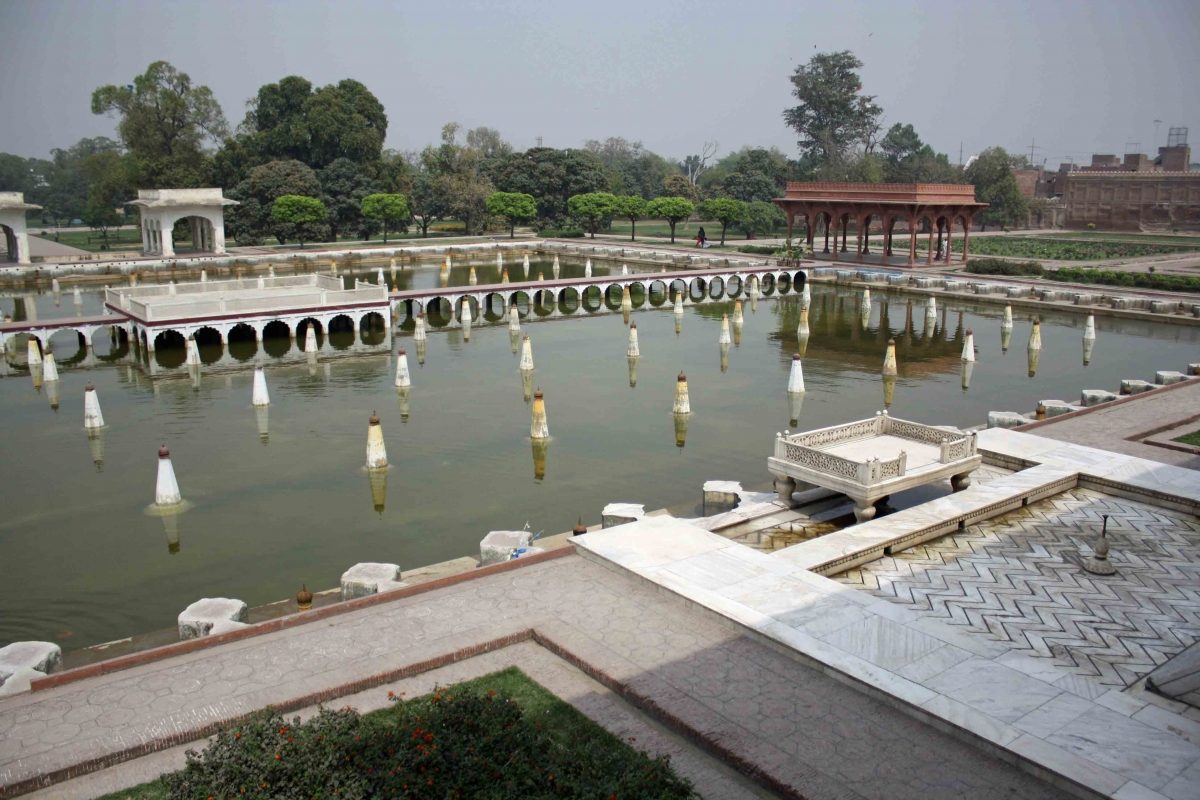 This article is written by Mehreen Chida-Razvi. It was originally published on www.sahapedia.org an open online resource on the arts, cultures and heritage of India.

The Mughal’s complex palatial buildings, splendid tombs and the beautiful mosques  may have impacted the visual character of their domain, but it was the gardens they constructed which truly transformed the face of the Mughal empire. From Delhi to Agra to Kashmir and Lahore, the Mughal gardens have significantly contributed to the landscape of the city. It was Babur who first introduced to South Asia, the concept of the planned charbagh, which was pervasive throughout his ancestral homeland of Farghana and his kingdom of Kabul, where he built the first Mughal garden of South Asia in the Punjab in 1519: the Bagh-i-Safa at Kalda Kahar in the Salt Range. In his memoirs, Babur lamented the fact that al-Hind lacked running water for gardens or residences, and he observed that the existing gardens there had no walls, indicating that he considered ‘proper’ gardens to be enclosed spaces. To amend these faults he began constructing gardens and the assorted waterworks necessary to remind himself of his ancestral home, and ordered his nobles to do the same. This practice was eagerly adopted by his successors and they drastically changed the landscape of their empire. It must be remembered that for the Mughals and their Central Asian ancestors, these spaces were not mere patches of greenery with flowers and trees, but instead were considered primarily as architectural settings.

Mughal gardens served various functions which included their use as airy quadrangles within the confines of the Mughals’ fort-palaces, pleasurable retreats from the urban centre, and also as a base for hunting expeditions. The garden Jahangir commissioned at Sheikhupura in Punjab (Pakistan), is a perfect example of the latter type of garden. The Mughals created gardens in both urban areas, for rest and relaxation, and rural areas where they served as halting places for the royal family and their entourage. Tomb gardens were a different variety with a much more defined role: to represent the gardens of Paradise within which the deceased would find themselves in the afterlife.  The Taj Mahal is again the supreme example of this.

It has been remarked that the association of the garden and the tomb in Mughal South Asia, where the garden was such an integral part of the funerary complex, was not found in any other part of the Islamic world. The tomb garden came into its own in Mughal al-Hind as a variation on the classic charbagh pattern; in the centre of the garden was placed the mausoleum instead of a pleasure pavilion. One reason for this central placement has been summed up in the following manner: the tomb is ‘in the middle of a charbagh at the crossing of four raised avenues which have waterways coursing along them. This layout evoked the pairi daeza [walled palace], from which the Persian term ‘paradise’ [comes from]. The fountain of life is in the centre of the park from which the four holy rivers gush. If a tomb is placed in this position, the deceased would be placed in the lap of eternity. The conception of the pairi daeza explains the fundamental importance underlying gardens and the play of water in Indo-Islamic architecture.’

The tomb gardens of the Mughals were therefore conceptualised as earthly versions of the Gardens of Paradise. According to the Quran, heaven is an allegorical garden in which the deceased will ever after dwell. In Sura 55 the Muslim faithful are told that Heaven consists of gardens with trees, springs, every fruit, carpets to recline on and companions. In addition, Sura 76 speaks of the righteous being given cups of wine mixed with camphor to drink, and passed amongst them will be round, silver vessels and crystal goblets. This symbolism provided a starting point for Muslim architects and artists to visually represent the afterlife, which they did in amazing ways. The notion of the tomb garden being representative of Paradise was also reflected in the structures erected in these spaces. The Islamic tradition of Paradise is most often said to have eight levels, and so the number ‘eight’ came to be considered as a paradisiacal symbol; as a result, eight-sided plans were preferred by the Mughals in constructing their mausoleums, one of the favourite versions of this being the hasht bihisht ground plan, the term itself meaning ‘eight paradises’. This ground plan was used to stunning effect at Humayun’s tomb and again at the Taj Mahal.

Until the reign of Shah Jahan, the classical format for the Mughal garden was an enclosed space with a structure at its centre, an entrance gate (or multiple ones), and subsidiary structures, usually pavilions, set into the remaining walls. During Shah Jahan’s reign, however, more importance was placed on gardens in which the main building was constructed at one end of the space and not at its centre. The Taj Mahal again serves as the epitome of this type of garden plan as it was constructed not in the centre of the tomb garden, but on a platform at the end of it, overlooking the river. This brings up an important aspect of Shah Jahani architecture, which was the importance of the riverfront garden, something which has been discussed extensively elsewhere. Another garden-type Shah Jahan is often associated with is the terraced garden, the most famous of which are the Shalimar Gardens in Kashmir and Lahore. He constructed the first Shalimar Gardens in Kashmir while still a prince at the command of Jahangir, but once Emperor he commissioned two further Shalimar Gardens in Lahore and Delhi, the latter of which no trace remains. All three were constructed as terraced gardens, the concept of which was also imported from Central Asia. When completed, the Shalimar gardens in Lahore (Fig. 4) were where Shah Jahan would stay on his visits to the city instead of within the Shahi Qila, the city’s fort. It was constructed on three terraces, the top terrace, called the Fara Baksh Bagh (‘joy-imparting garden’), which was reserved for the Emperor and the royal family, while the bottom terrace, the Fayz Baksh Bagh (‘bounty-bestowing garden’), was where the court retinue would stay. The middle terrace was composed of a large pool with fountains, pavilions and multiple flower beds (Fig. 5). An intricate water-engineering and hydraulic system was needed for the garden to have running water and spurting fountains, and the water necessary for this was transported to the site from the river Ravi by a canal system designed by one of Shah Jahan’s courtiers.

From Castles to Countryside, what do you know about England’s heritage?

This is not just another Quiz about India’s heritage