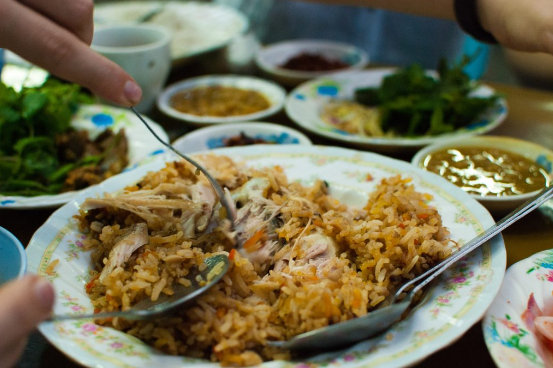 In recent years, UNESCO added gastronomy to its Intangible Heritage List, since this type of activity demonstrates what as be defined as “practices, representations, and expressions, and knowledge and skills which are transmitted from generation to generation and which provide communities and groups with a sense of identity and continuity” (UNESCO).

As interns of the programme GoUNESCO my pair Ravi Tej Reddy Halaharvi and me had to choose and describe a dish, local to our region. In order to make it more interesting, not only to our readers, but also to us, we decided to describe each other’s dish so as to discover, in a very deeper way, a different culture.

Ravi Tej is from Hyderabad, the capital of the Indian State of Telangana. This city is located in Southern India, a region where rice is the staple food. He talked me about a very typical and particular dish that he used to eat: the Hyderabadi biryani. Hyderabadi biryani is a form of Biryani, made with different ingredients: basmati rice, goat meat (or eventually chicken), onions, yogurt, lemon, spices.

Looking at the history of Hyderabad biryani, it could be seen that its origins are related to the Mughals, but historian discovered that, prior the Mughals invasion, there were some rice dishes in India, very similar to the modern Hyderabad biryani. In particular, there are some sources that mention a rice dish indicating it as “Oon Soru”. This dish was present in Tamil as early as the year 2 A.D.

There are two different types of Hyderabadi biryani: the Pakki Biryani, that is cooked, and the Kachchi Biryani, that is raw. These two types of Biryani are diversified caused the two different ways or methods of cooking the meat. According to the tradition, in order to prepare a dish of Pakki Biryani, it is necessary to cook the meat (tradition states to use goat meat, but chicken is also accepted) in a different pot and then layer it with the other ingredients, rice and seal, and cook on a low heat. The recipe of Kachchi Biryani, instead, needs you to marinate the meat, and the put it on the bottom of a large pot and then cover it with boiled rice and seal. The most popular one in India is the Pakki Biryani.

Rice plays an important role also in Indian traditions: Annadanam or donation of rice is considered to be the greatest virtues exhibited by a person in southern India. Here, rice is unequivocally the staple food, in fact, it is synonymous with food. After a sumptuous meal, diners are often heard saying “Annadata sukhibava!” meaning “Let the provider of food(rice) be happy”, these providers are none other than the farmers who harvest the paddy. Even to this day, the farming techniques employed in the cultivation of rice in these regions are purely traditional. ‘Annadatas’ plough the land and plant the seeds with their own hands. Such is the cultural heritage of rice. Rice has planted itself firmly even in the religious beliefs of Indians. Be it Pongal(New Year) or a wedding, no celebration is complete without rice. Rice has no competition among its more gastronomically-inclined peers when these facts are considered.

Now that you have had a little taste of Indian culture, why not prepare a nice dish of Hyderabadi biryani? Here’s the recipe (source: Bawarchi.com)!

How to make a Hyderabadi Biryani:

Gilletz, N. (2016). The Shabbat Table: Kosher cuisine from around the world. [online] The Canadian Jewish News. Available at: http://www.cjnews.com/food/the-shabbat-table-kosher-cuisine-from-around-the-world India Currents. (2016). Tracing the History of Biryani. [online] Available at: https://www.indiacurrents.com/articles/2011/05/26/tracing-history-biryani