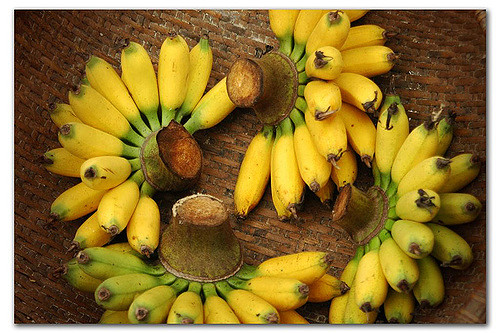 Contrary to the title of this article, Banana plants are actually large herbs rather than trees. There are four main components of the banana plant, comprising the stem, the flower, the fruit, and the leaf – all of which are used predominantly in the cuisines of Kerala and Tamil Nadu. It is interesting to note that this basically forms the constitution of the entire tree, and nothing remains as waste!

The banana flowers bloom into fruit after three or four months. The stems are composed of concentric tightly wrapped sheaths, around a central core for water conservation.

To begin with, what is presumably most familiar, consuming the ripened fruit is common in India, as it is all over the world. In the western world, the Cavendish variety remains the most common type in grocery stores. In India, however, the banana fruit is prevalent in a myriad of varieties, depending on where one is in the country. In South India for example, local varieties such as Nendran (Plantain), Robusta, Virupakshi, Red Banana, Monthan, etc.

My father told me once that when he was growing up there existed a sweet small banana Sirumaliapazham(Small hill banana) which was known for its sweetness and nutritious value. Sadly, this species, along with many others are being phased out of plantations due to their lack of disease resistance.

The raw fruit is used in savoury dishes and curries. It is a very versatile element and can be fried with some chilli powder and turmeric, cooked with coconut and ground pepper (A dish known as Erisseri), it can even be added as an element in avialor vegetable stew or cut into slices and deep fried to make banana chips.

If the red skin of the banana blossom is peeled, numerous finger-like pods are visible. These are the would-have-been bananas of the stalk. In order to consume the pods, one must remove the fibrous pistil and calyx as they are fibrous and do not cook well. The inner portion is what may be cut up and used in curries. It is yet another versatile portion of the banana plant, bearing a similarity in terms of consistency to bamboo shoots.  The entire process requires nimble hands as there can be even 100 of these small pods in one blossom. As a note on sustainability, each banana plant has a couple of blossoms at once; however is it not certain that all will ripen into fruit. The blossoms are utilized only when they haven’t bloomed.

The stem of the banana plant consists of concentric sheaths tightly wound together. It almost resembles a bamboo stalk. The stem, similar to the rest of the banana plant is high in water content. To consume the stem, the outer layers are removed until only the pith remains. This is then used in making either dry curries or a kootu or vegetable stew.

The stem is cut during the harvest of the fruit, as the plant lives through only one cycle of harvest. The leftover remains after the harvest may be used as fodder for animals. The plant multiplies asexually via underground bulbs, known as suckers. 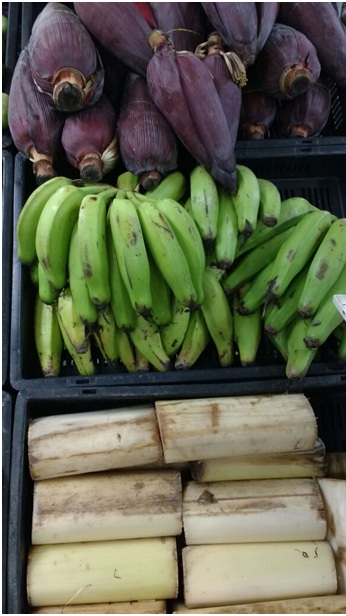 The last but maybe most recognizable use of bananas, related to food and cuisine is the banana leaf. The leaf basically used as a plate during almost all South Indian weddings and celebrations. It is simultaneously abundant as well as sustainable and hygienic. The leaves are waterproof and provide a good surface for rice and the accompaniments that go with it. Perhaps more ubiquitously, banana leaves are even wrapped around food to impart an aroma.

Sometimes culture and tradition can impart to us practices which are inherently sustainable. The example of the many uses of the banana plant is but a singular instance of this in the realm of food heritage and culture.