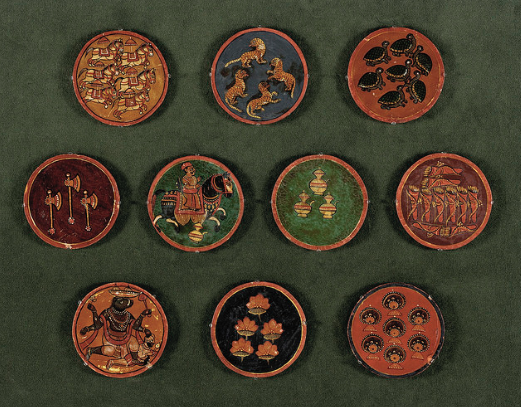 Ganjifa cards were used in the game of Ganjifa. It is believed that the game originated in Persia.

The first Syllable is attributed to the Persian word ‘Ganj’, means treasure. This game was famous in many countries throughout many middle east and Western Asian countries. The earliest mention is from Yusuf Ibn Tagri Birdi’s “Annals of Egypt and Syria” dealing with events of the year 1417-1418 AD, where “Kanjifah” was ‘played with high stakes by respectable and rich people. Subsequently, a century later, we hear of ganjifa being patronised by Shah Ismail, the first ruler of Safavi dynasty in Persia – an eight suited game with twelve cards in each suit.

The cards are usually made in rectangular and round shapes. The cards are hand-painted on a variety of materials, ranging from ivory,mother-of-pearl and tortoiseshell to papier-mache, paper, and stiffened cloth. Rectangular cards are made in the Persian style and were popular during the 18th century and the circular shape cards are an Indian innovation. Dashavatra, Ramayana, Rashi, Naqsh etc are variation of Ganjifa cards.The ‘Rashi Ganjifa’ is a set of twelve cards painted with symbols from the 12 signs of the Zodiac which was a very popular thing in 18th and 19th centuries.

The card in the picture has a cupid, Kamadeva- the God of Love is shown seated on his mount parrot and pulled string of bow to shoot the arrow. Since this card is related to Pisces, one of the 12 Zodiac signs, So Kamadeva has been surrounded by fishes around it, in the depicted card. The card was displayed as the object of the month at the National Museum, informing about the marvelous past and it’s details of the Ganjifa cards.

The intricacy of design, as well as the wit require to play the game itself puts this intangible heritage into the realm of facets of history that render Indian culture distinct.

The Akota Bronzes at the Baroda Museum

The Museum of Contemporary Art in Srpska