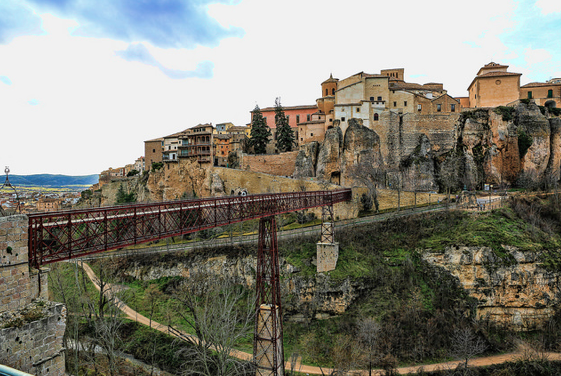 Cuenca is an autonomous community located in the Northeastern region of Castile-La Mancha, an interior province of Spain. This well fortified town once served as the best defence hub for the Moors (Muslim Arabs) who conquered the Liberian Peninsula in the heart of Caliphate of Cordoba (929-1031). The city was built to control the vast area of Kura de Kunka. The architectural design of Cuenca conforms to the natural landscape of the province, cutting across steep spurs with descending slopes into the deep gorges of river Huécar and Júcar. However, in 1177, Cuenca was recaptured from the Moors by Alfonso VIII of Castille, bringing in a new phase of architectural history as the city became a Bishopic “Royal Town” (consequently Christian).

The Christian architecture was marked by the construction of Spain’s first Gothic Cathedral and Casas Colgadas (Hanging Houses) which were suspended from the sheer cliffs, overlooking theHuécarRiver. The town became an administrative centre, and a manufacturing centre with textile industry and flourishing trade supplementing the Castilian economy.

During this period of development, Cuenca experienced a population boom in 1594, a shift in demographic distribution, with the wealthier citizens preferring the lower lying areas and the common citizens moving into suburban areas of the town. The intra-muros areas were also gradually populated by religious institutions. However, when the textile industry collapsed in the 17th century, Cuenca experienced great economic crisis with only a significant proportion of Christians surviving and continuing to build, further shaping the town with the construction of large monasteries, large aristocratic houses and the introduction of Baroque architecture.

Cuenca is truly an outstanding example of a well-preserved medieval fortress town with cultural heritage that is of great universal value. Designated a world heritage status by UNESCO, Cuenca has since established itself as an architectural and artistic town of modern art.