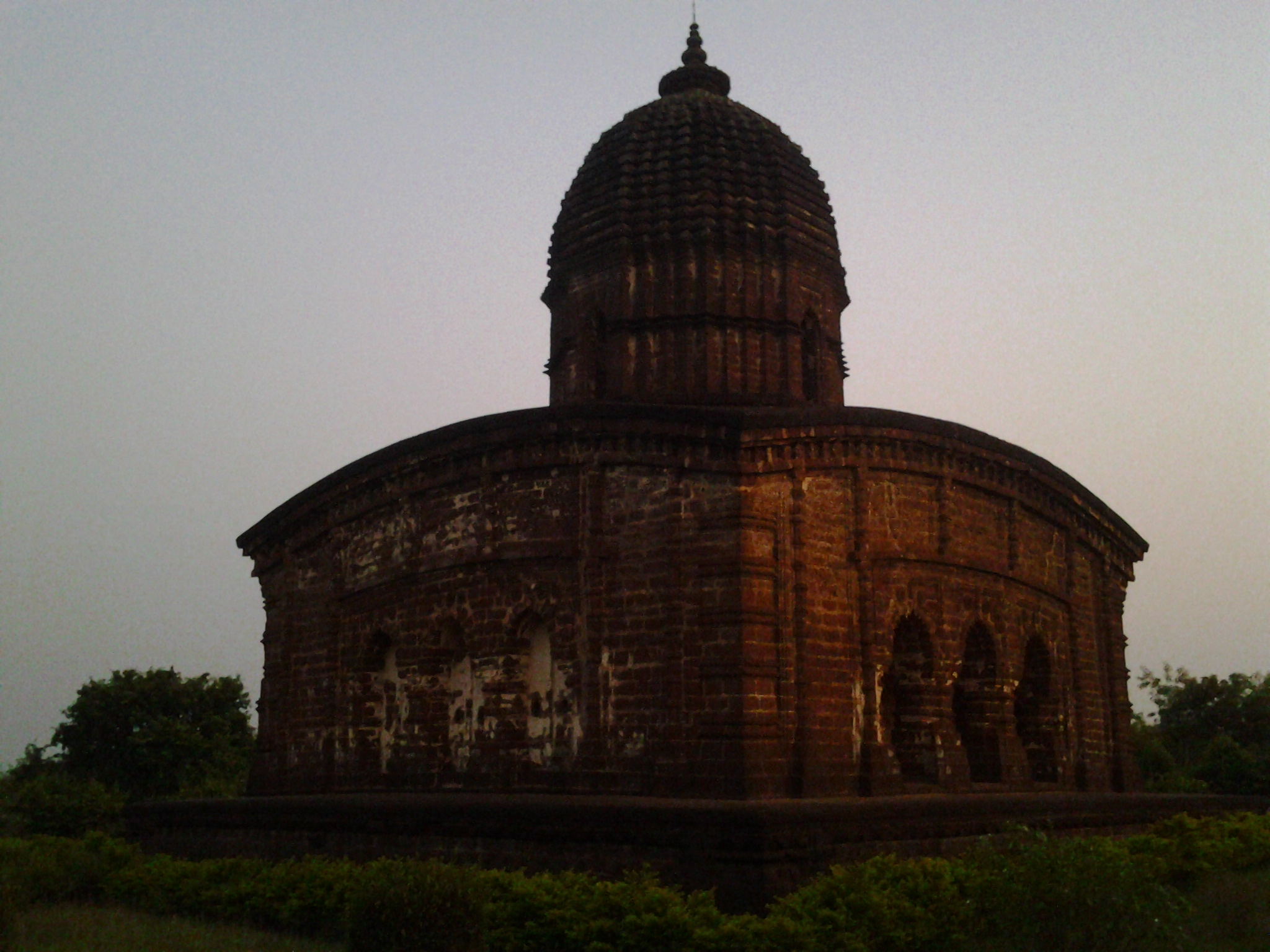 When we talk about Indian temple architecture, what comes to mind is the intricately carved facades of the temples of North and Central India or the colorful towering Gopurams of the temples of Southern India. But there is a very different style of temple architecture that is unique to the state of West Bengal in the Eastern part of the country, that has been largely neglected over the years. This style is unlike anything else in India, and its origins are shrouded in mystery.

These unique temples are spread across the state, as well as the neighboring country of Bangladesh, which used to be a part of Bengal, before the partition of India.The oldest of these temples are found in the small town of Bishnupur, in the Bankura district to the western part of the state. Its like any other sleepy little town located in the vast red soil plains of  the Bankura region, except that this little town contains hundreds of these unique temples, each more beautiful that the others.

Though vastly different from each other, the temples share some common features. The most important of these features is the sloping roof structure, which, as proposed by archaeologists, was most probably created to mimic the sloping roofs of the traditional village huts found across Bengal. The second most striking feature of most of these temples are the pinnacles or ‘Ratna’, which were built on top of the roofs in different configurations, ranging from a single ‘Ratna’, to as many as nine ‘Ratnas’. The third important feature, which is perhaps the most significant one, would be the intricately carved facades of these temples, which include stone carvings, stucco work as well as terracotta panels in the later temples. 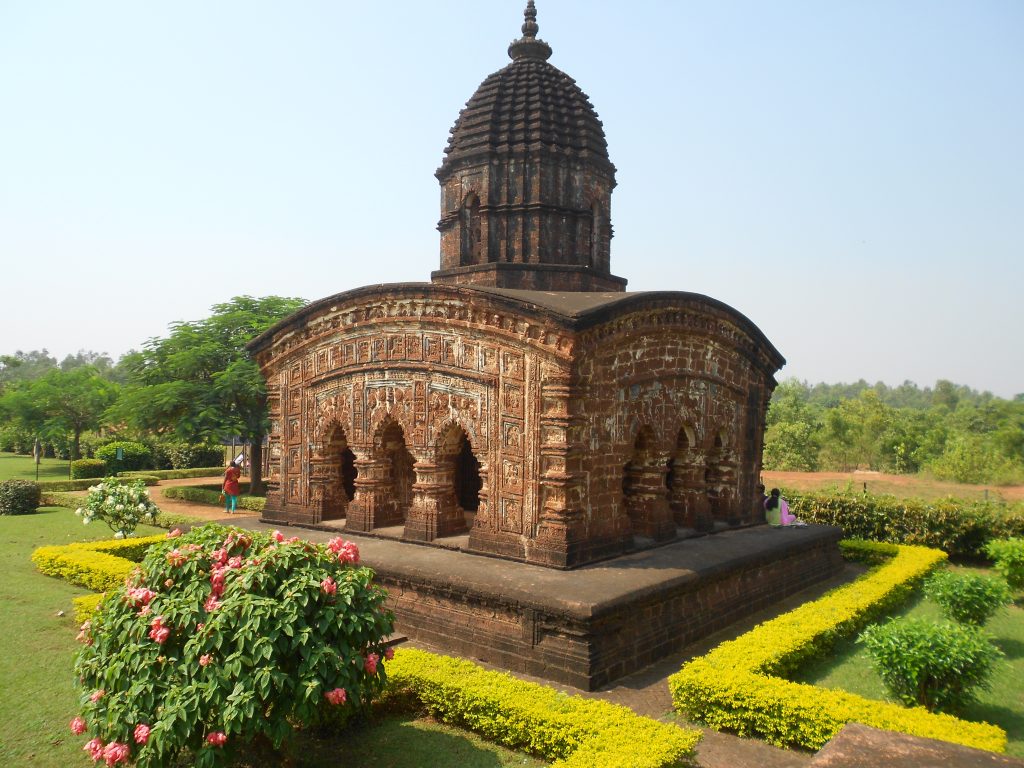 An abandoned temple in Bishnupur, dedicated to the Hindu God Vishnu. Note the unique sloping roof, the laterite stone structure and the single pinnacle or Ratna on the roof; Photo courtesy Supriyo Dutta

Based on historical records, these temples were built by the Malla dynasty that ruled the area in and around Bishnupur, for over a thousand years, until their power began to diminish under the influence of the invading Marathas, the zamindars of Burdwan, and others, and finally the last of the Malla kings were rendered powerless by the British.The entire area that was once ruled by the Malla kings is locally known as Mallabhum or land of the Mallas.

It is said that the dynasty was established by Adi Malla, around 694 A.D., who established a flourishing community that slowly grew to become a small yet powerful kingdom, that remained unchallenged for a long time until the arrival of the Mughals. The Malla kings were worshipers of Vishnu and were great patrons of art and architecture. They made Bishnupur their capital, built a large palace, a protective moat around the town, and most importantly, built hundreds of temples that brought in a new age of architectural splendor in the region of Bengal. Today Bishnupur is no longer the magnificent capital of a flourishing empire, but the legacy of the Malla kings lives on through their temples. 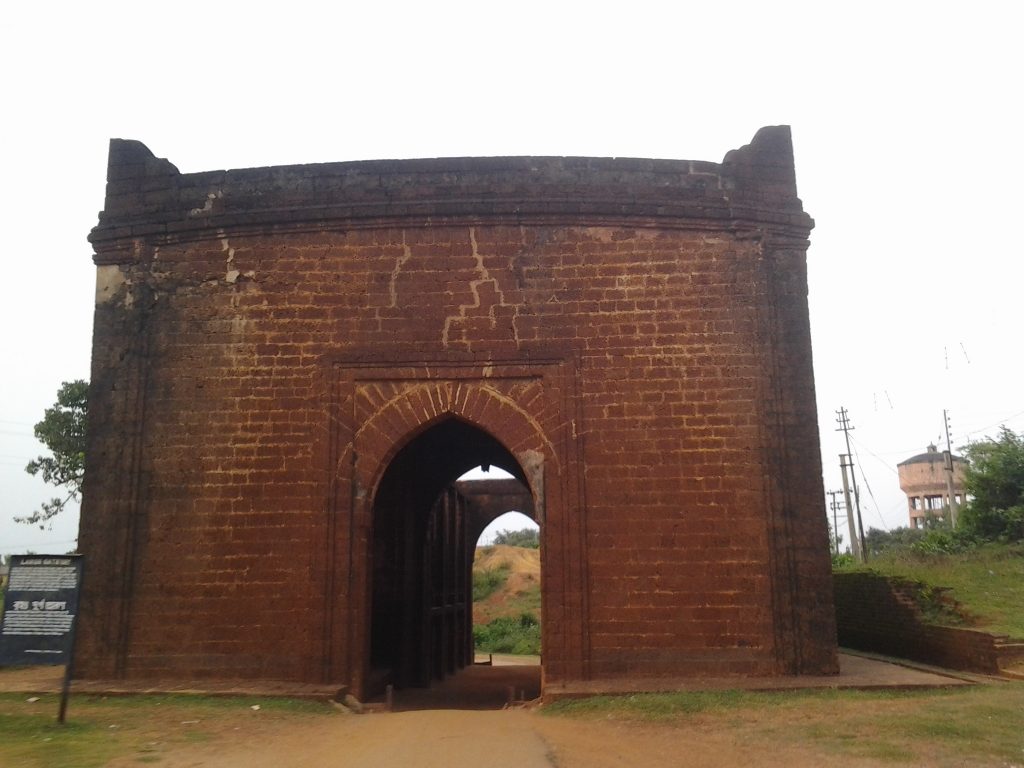 The stone gateway to the old citadel of Bishnupur. There used to be fortifications on either side of the gateway; Photo courtesy Supriyo Dutta 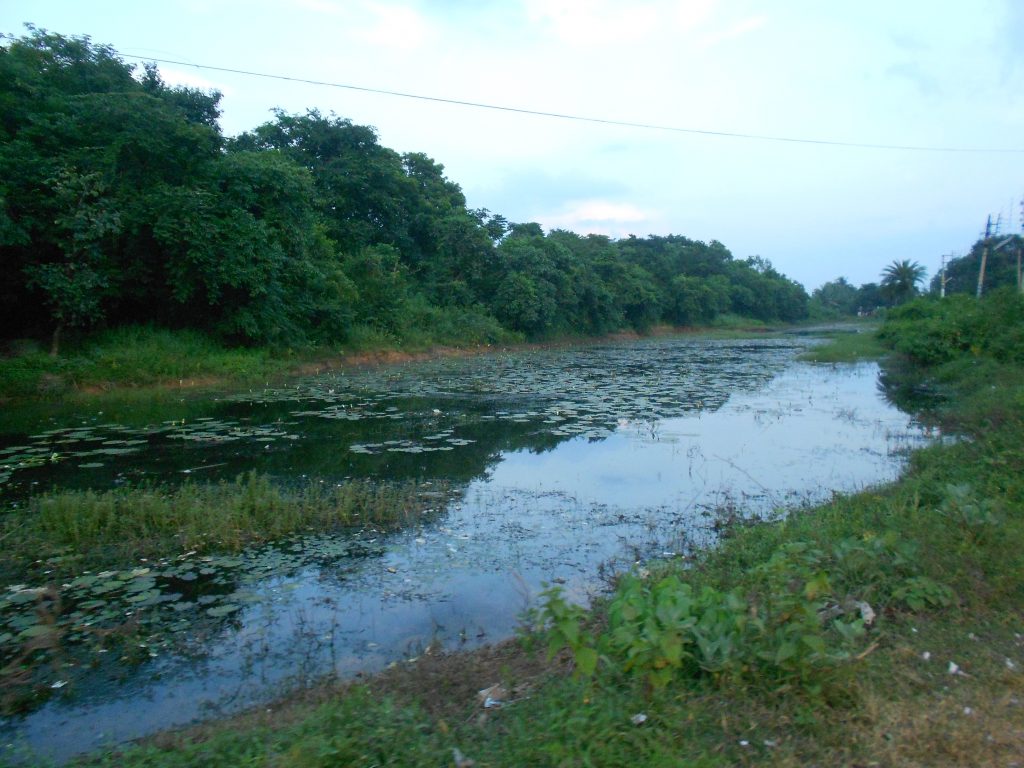 The earliest temples in the area were built of Laterite stone, which is found in abundance in the area.The facades and interior walls of these temples were plastered with lime and were decorated with beautiful stucco work depicting everything from mythological creatures to the heroic deeds of the kings who commissioned their construction. Today most of these temples have lost their white plaster and the brown colored laterite can be clearly seen. Most of the temples built by the Malla kings follow a similar structure, with a single large central chamber known as the ‘Garbhagriha’, with a narrow passage running on all four sides. The passages are intercepted by arched gateways that open towards the outside. These four sided central buildings are generally topped with roofs that slope towards the four corners creating arches across the sides, forming the signature style of roof that is unique to this region.The roofs are, in most of the temples, topped with either a single central pinnacle or a set of five pinnacles, with the exception of a few smaller temples where there are as many as nine pinnacles. Most of these temples are enclosed within high walls, having an ornamental gateway, and containing a series of smaller structures within the compound. The most common buildings found within these compounds are the ‘Natmandir’ or dance hall, a kitchen, a small shrine with a Tulsi plant inside it and in some cases a well. Each king tried to build bigger temples that his predecessors, bringing in architects from distant lands and sparing no expenses at all. Some of the most important temples of this type are the Radheshyam temple, Lal Ji temple, Kalachand temple, the Radha Govinda temple and many more. Most of these temples were originally dedicated to Vishnu, but have lost their idols long ago and are now abandoned. 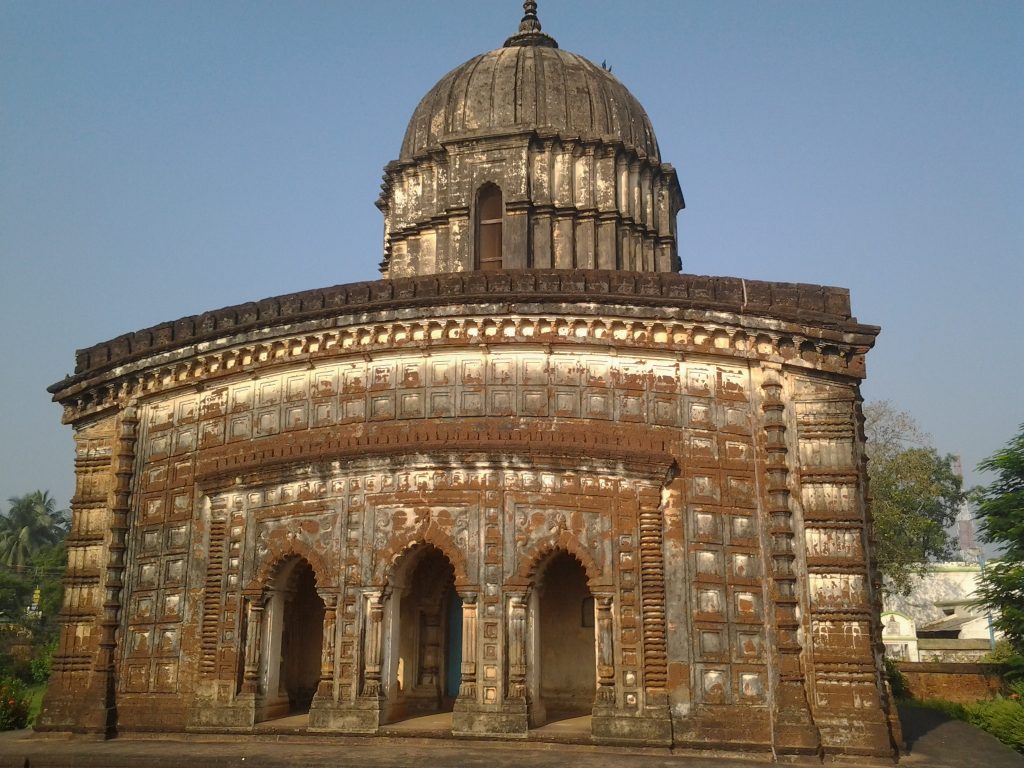 The Radheshyam temple with its laterite structure, remnants of white plaster and stucco work, and the large single pinnacle on the roof. This was one of the earliest temples built in the area dedicated to Vishnu and has been recently reinstalled with new idols after laying abandoned for hundreds of years; Photo courtesy Supriyo Dutta 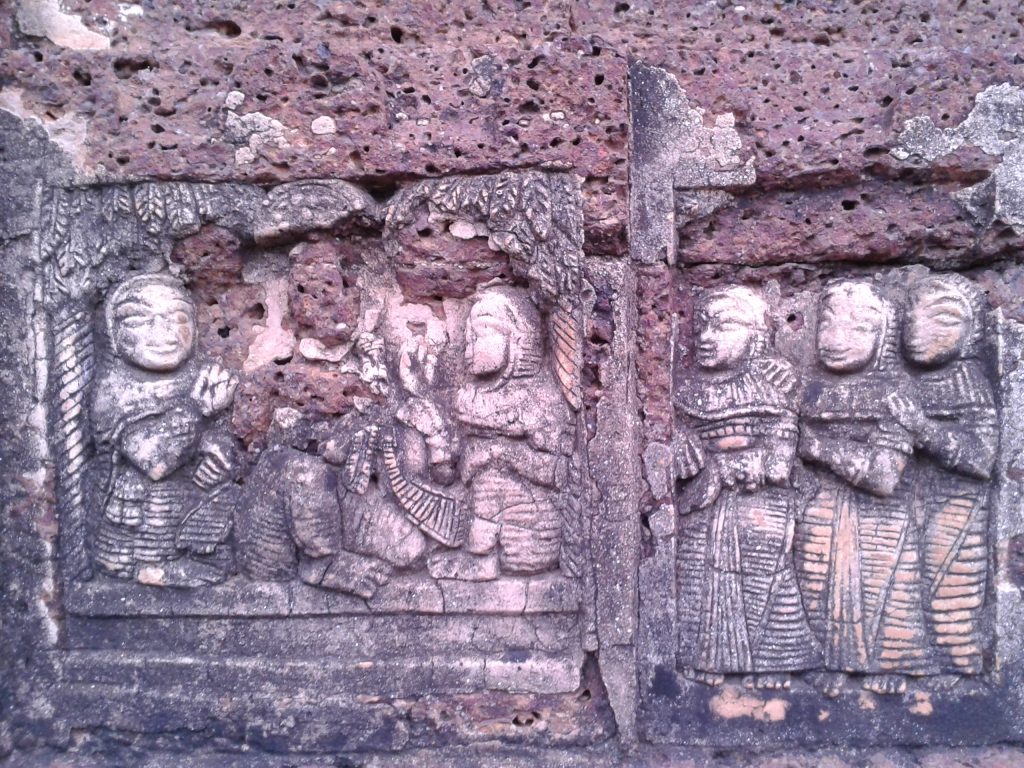 Remnants of stucco work on the walls of the Radheshyam temple depicting the King with his two guards on the left panel and a group of noblemen on the right panel; Photo courtesy Supriyo Dutta 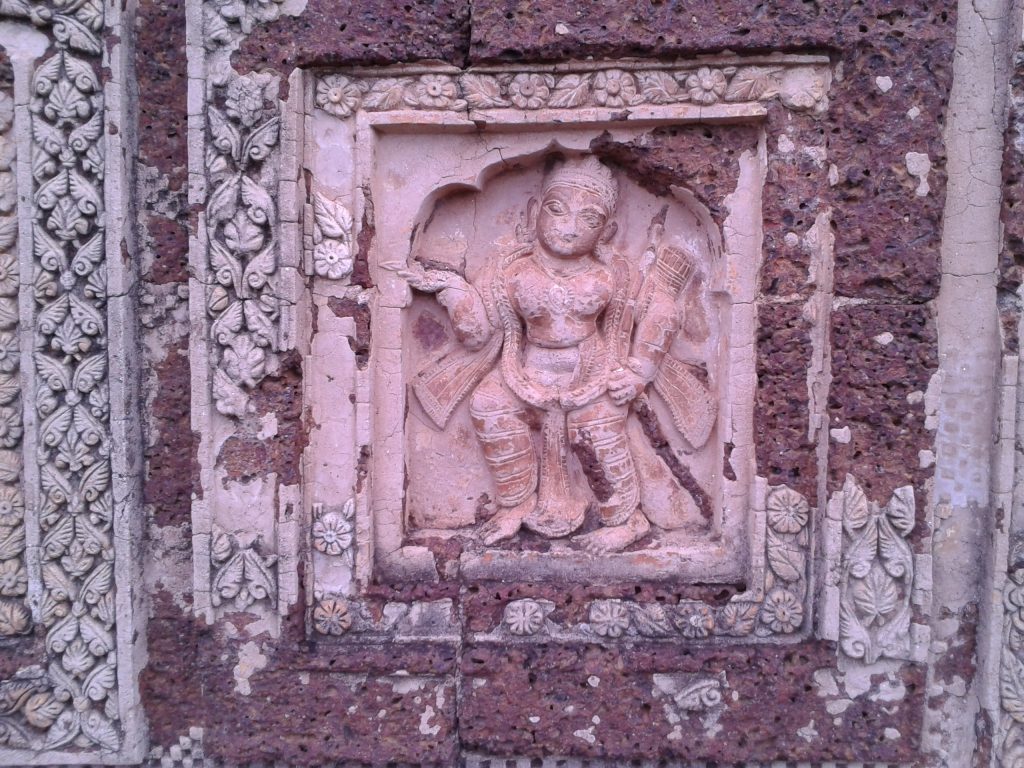 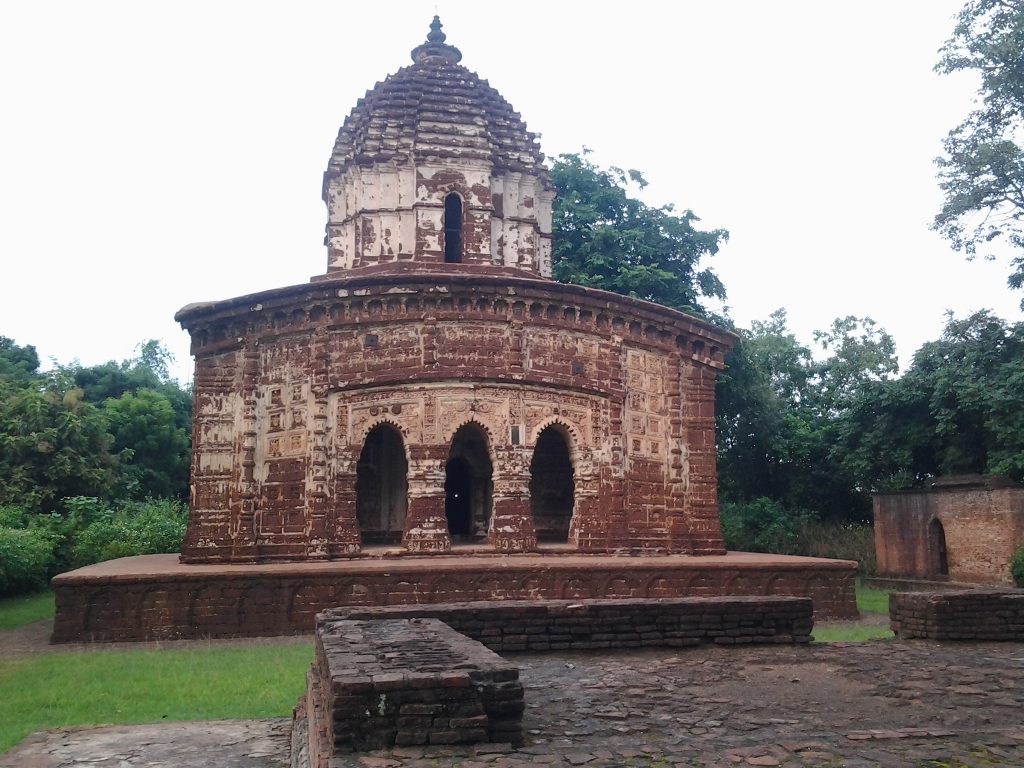 The Radha Madhav temple, along with ruins of the Natmandir or Dance Hall;Photo courtesy Supriyo Dutta 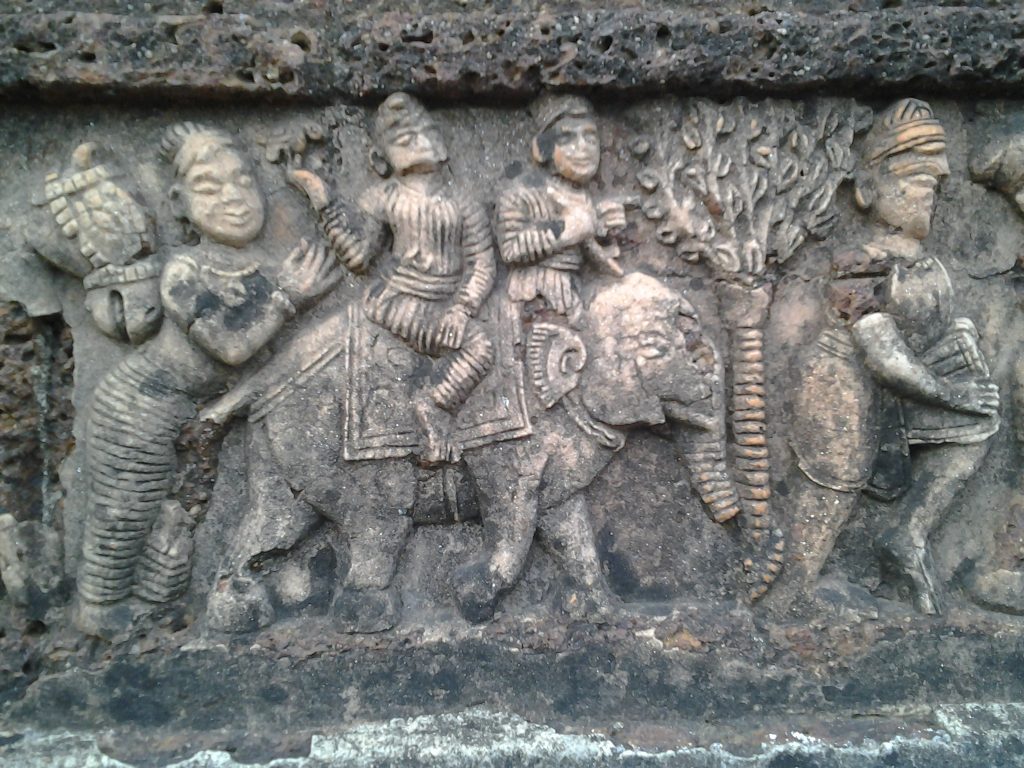 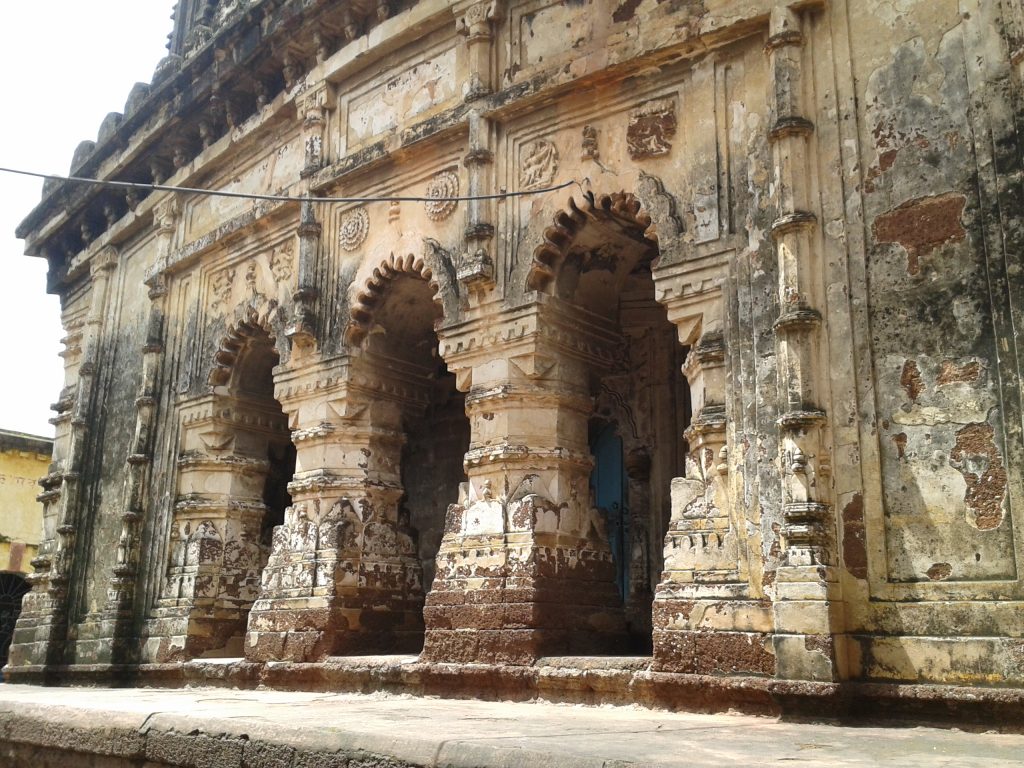 The mostly intact plaster and stucco facade, and the typical set of three arches forming the main entrance to the Madan Gopal temple dedicated to Vishnu, which is still in use;Photo courtesy Supriyo Dutta 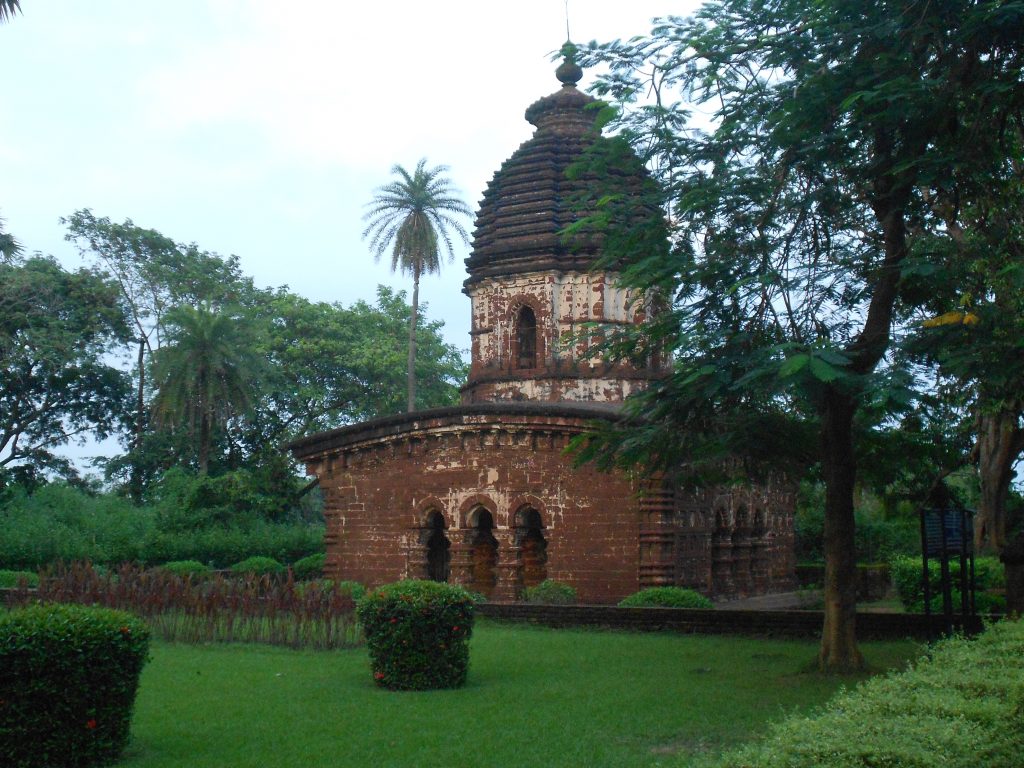 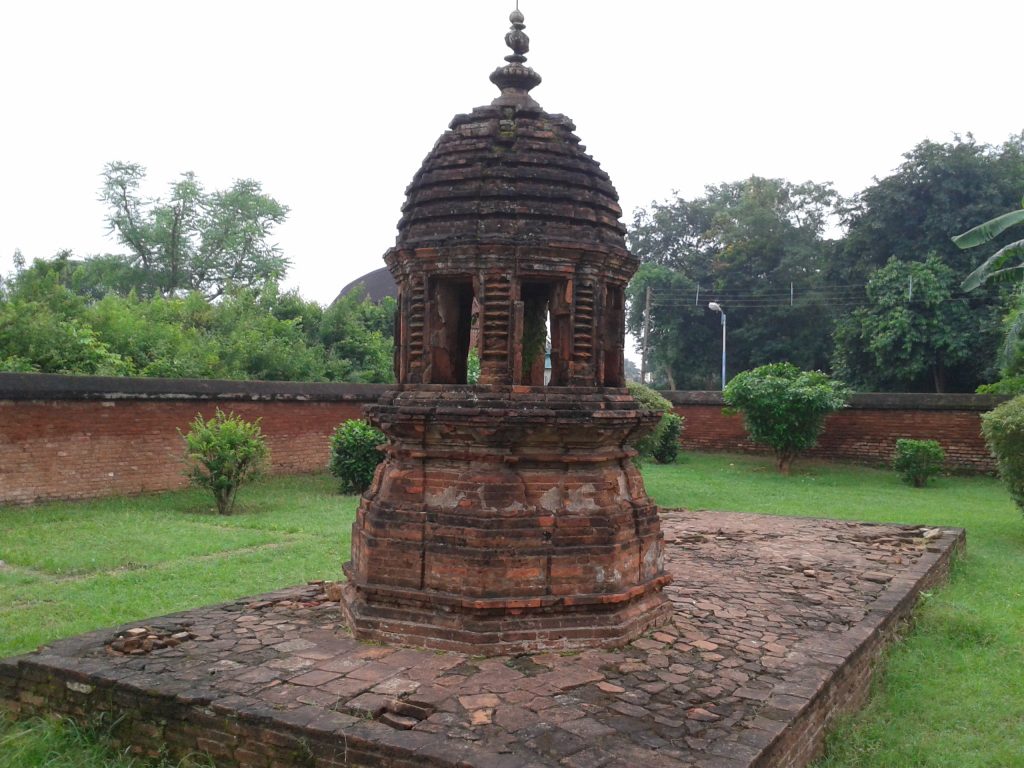 A typical miniature shrine with a Tulsi plant inside it, found in most of the temples; Photo courtesy Supriyo Dutta

Over the years the structures of the temples built by the Malla dynasty underwent a lot of changes, most importantly in terms of the building materials. Laterite blocks were difficult to carve and were replaced by bricks which were highly versatile and could be used to make even the most complex of designs.

The brick temples which are lesser in number than the laterite ones, have another strikingly different feature that makes them even more special than their earlier counterparts.These are the heavily carved terracotta panels that cover these temples almost entirely.These panels were first carved on soft clay tiles, baked, and  attached to the wall surface using lime mortar. Each panel was made to fit perfectly in an interlocking position with the surrounding panels, to create continuous walls of terracotta. Even today, these magnificent terracotta panels  give us an insight into the lost world of the Malla kings, depicting scenes of battle, lives of common people, Gods and Goddesses and much more. The Madan Mohan temple has some of the finest examples of these intricately decorated terracotta panels in the entire area. 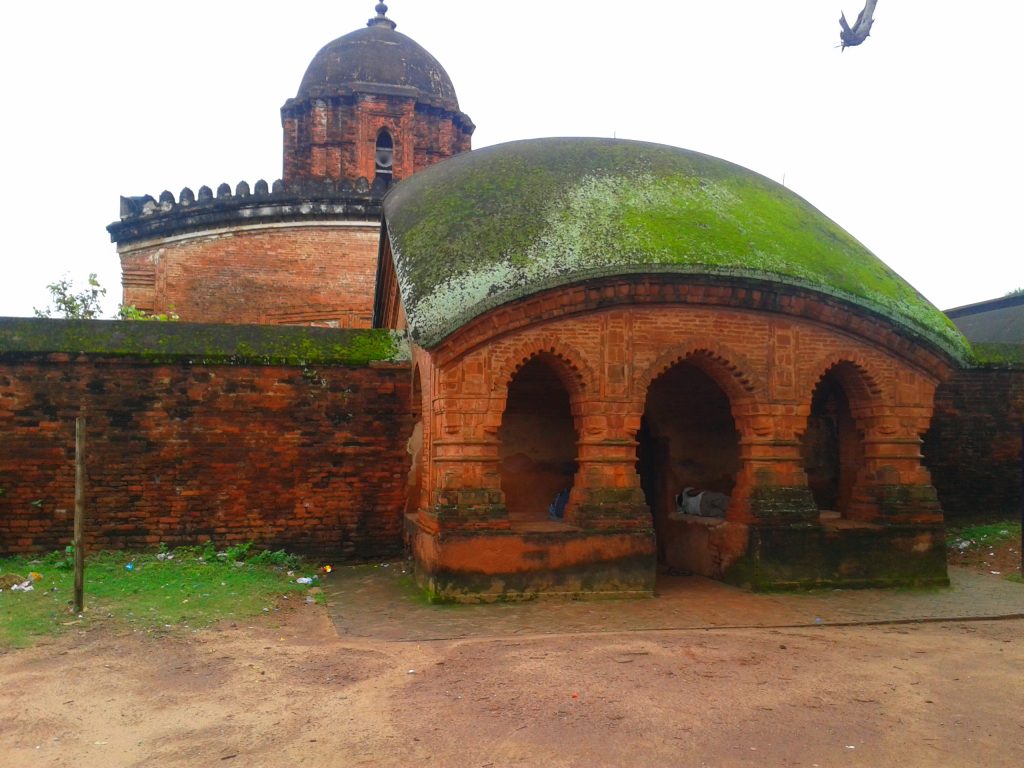 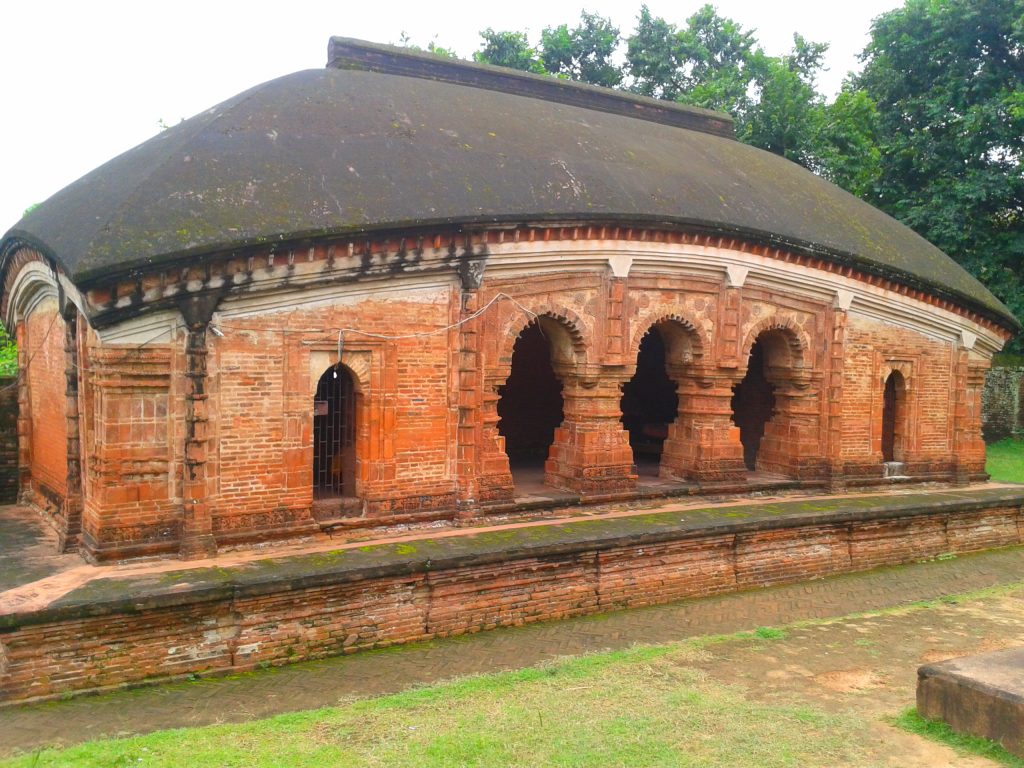 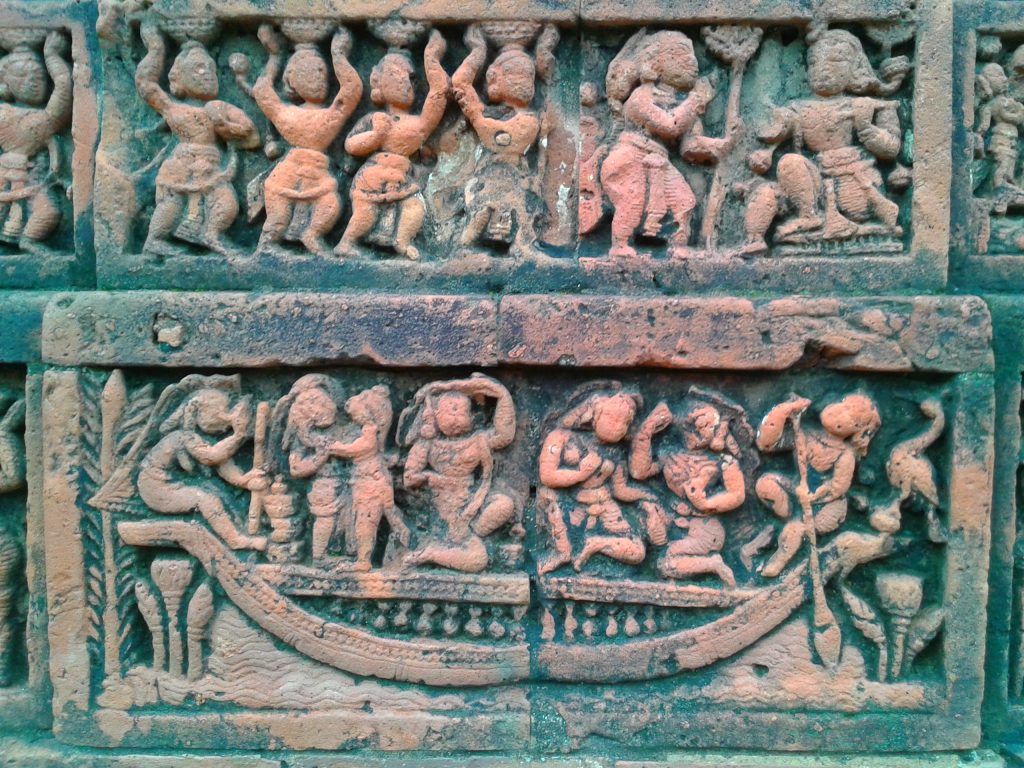 A set of terracotta panels on one of the walls of the Madan Mohan temple, showing a boat carrying the king on the lower panel, and a group of visitors offering gifts to the king in the top panel;Photo courtesy Supriyo Dutta 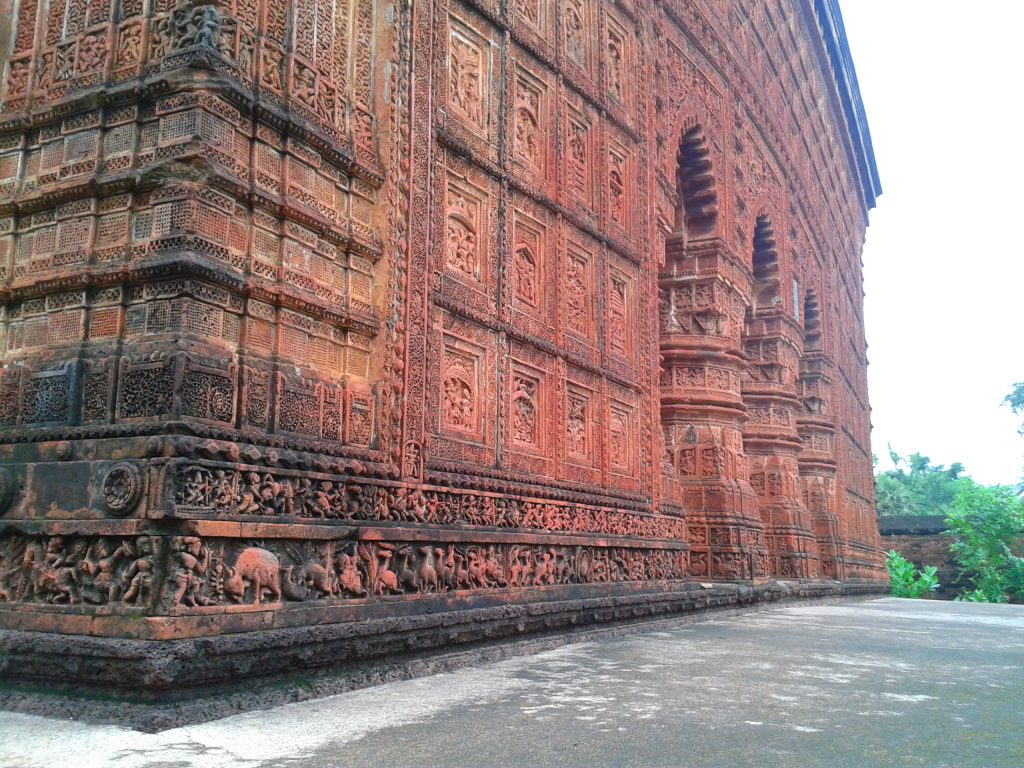 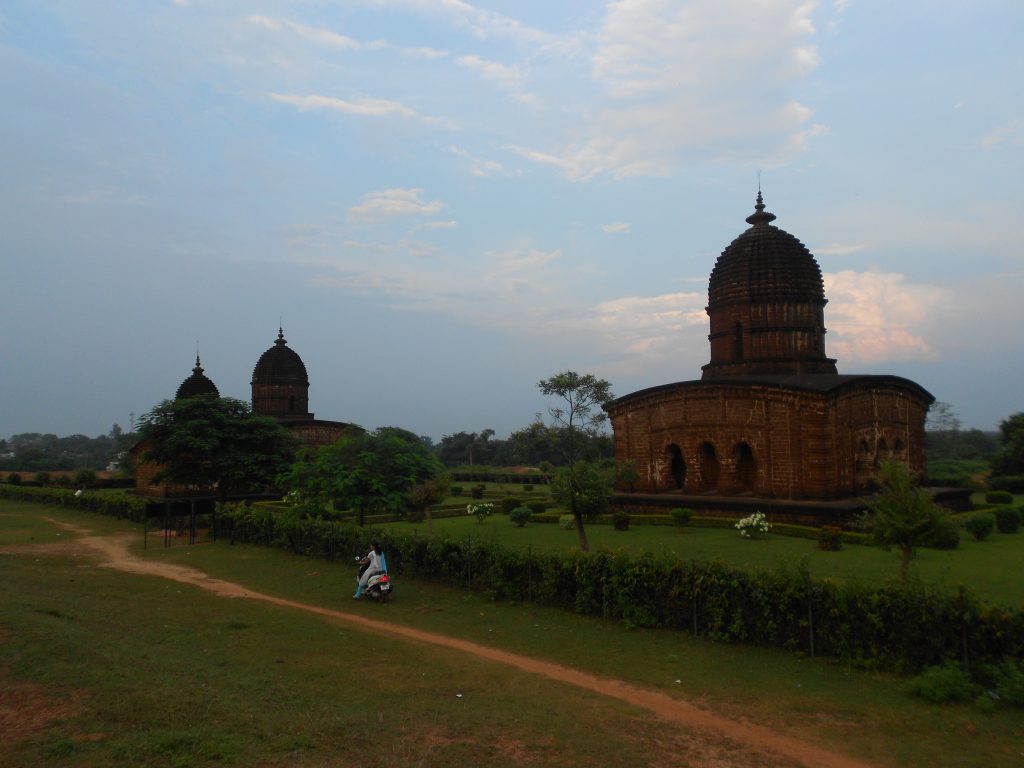 The age of brick temples also brought in a change in commonly used temple structures. Kings started to build temples that were very different from the ones built by their ancestors, allowing architects to exercise greater freedom and use their innovation. The most important examples of such new kind of temples are the Jor Bangla temple, which resembles two thatched roof huts joined together with a pinnacle at the top, and the Raash Mancha which comprises a series of arched passageways built one after the other, with a pyramidal roof structure. 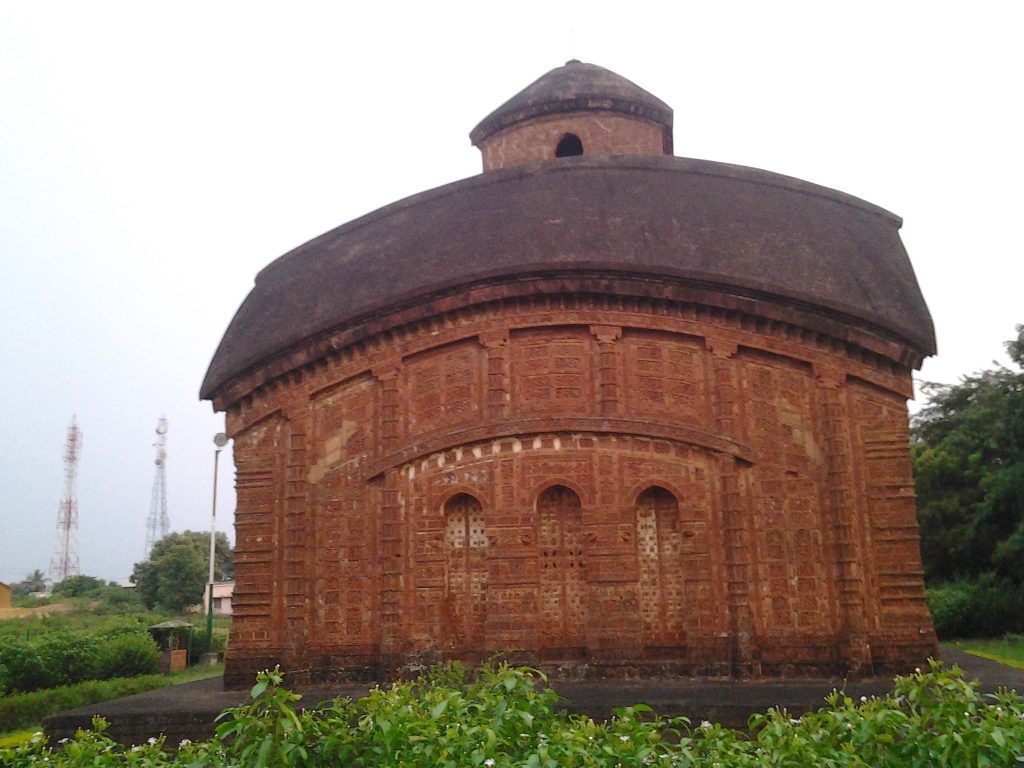 The Jor Bangla temple is different from the other temples in the area; Photo courtesy Supriyo Dutta

These magnificent temples make Bishnupur a treasure trove of architectural styles developed during the reign of the Malla kings, which would later be copied by hundreds of other temples across Bengal. But these beautiful temples have suffered a lot of damage due to vandalism, that happens even today, as the Government has failed to ensure their complete protection. Many of the temples have fallen into disrepair, while some have even collapsed.However, in spite of their poor condition, these magnificent temples remind us of the golden age of the Malla dynasty and the world they created in and around Bishnupur. 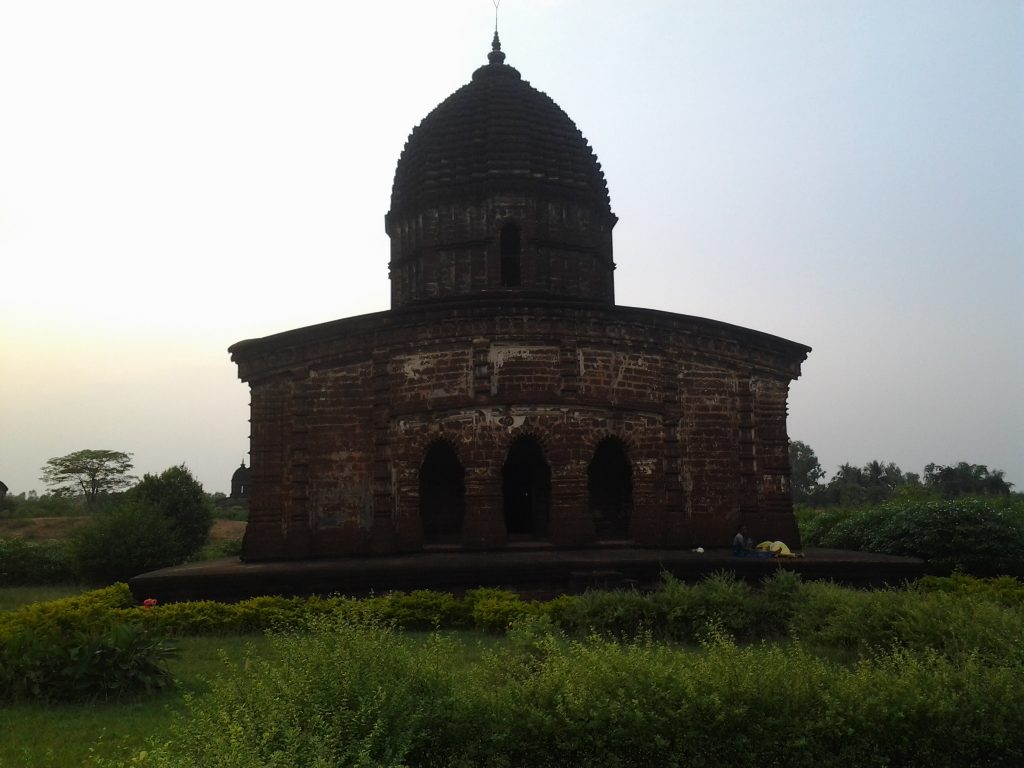 The neglected Nandalal temple, with most of its decorative features destroyed due to vandalism; Photo courtesy Supriyo Dutta 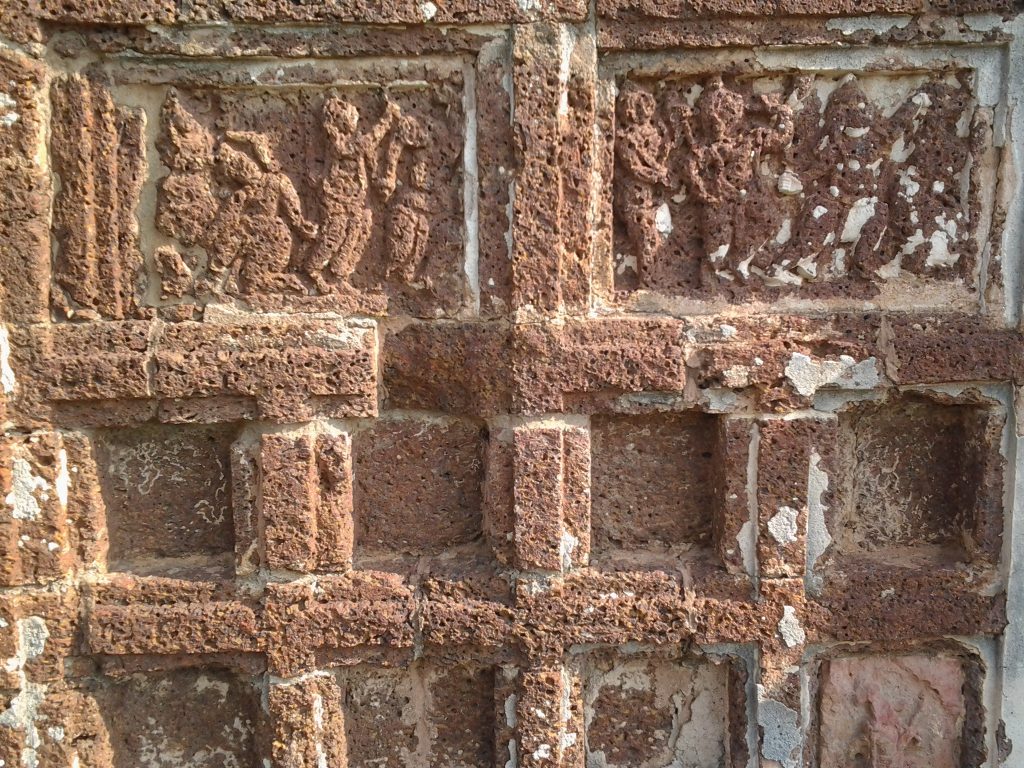 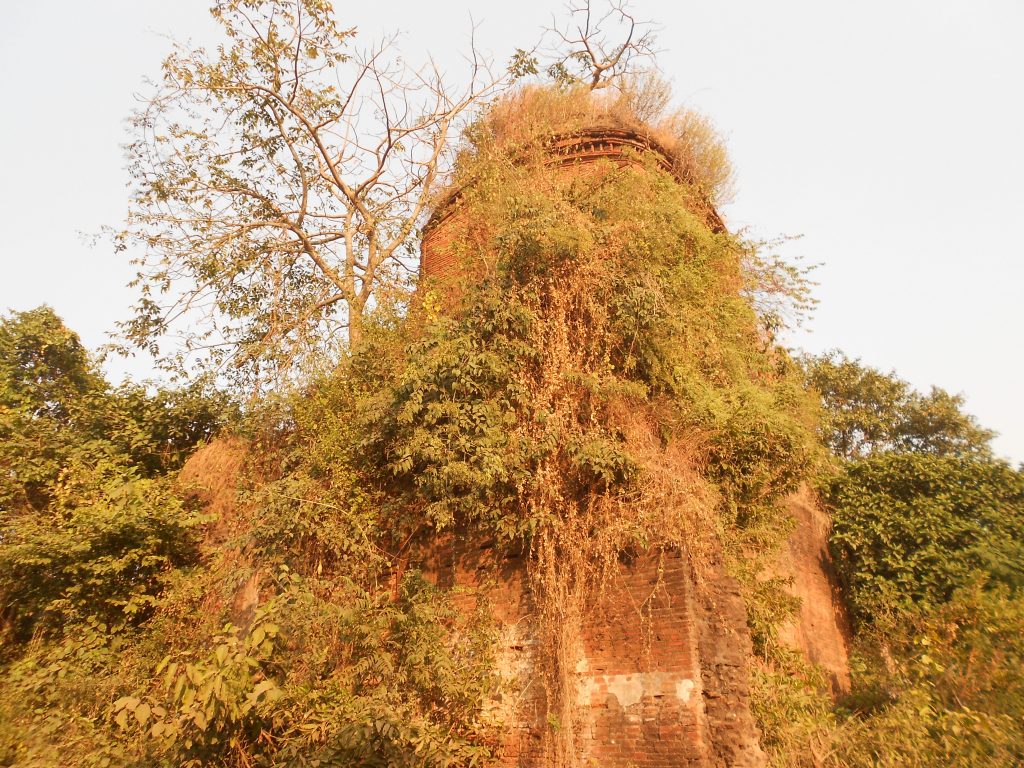 A large temple that had collapsed decades ago, was never restored; Photo courtesy Supriyo Dutta 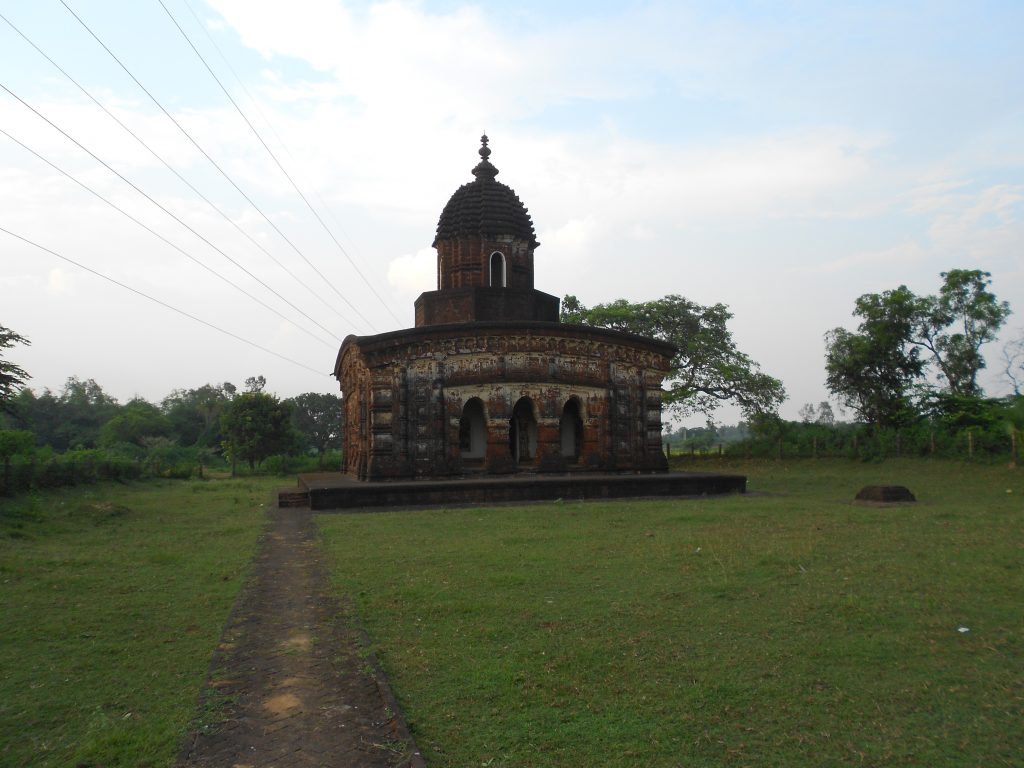 An unknown abandoned temple, with no traces of its boundary wall and other typical secondary buildings. The foundation of the Tulsi shrine is visible to the right side; Photo courtesy Supriyo Dutta

Parantha; a staple in the North Indian household