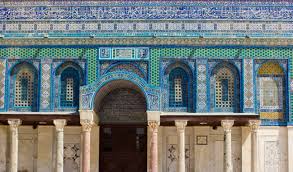 When visiting Jerusalem, there are many tourists who would wish to visit the Dome of Rock. The visitors are allowed to tour the compound of the Temple Mount and the Al-Aqsa Mosque. The dome and the mosque are located on the temple Mount and it has a Dome of Gold . It was built between 687-691 AD.

The Dome of Rock is a shrine in Jerusalem built by the Ummaiyad Chaliph in the 7th century. It is one of the most famous and the oldest Islamic monuments. The rock over which the shrine is built is both sacred to the Jews and the Muslims. It is believed that prophet Mohammed ascended to heaven from this site. According to the Jewish tradition, Abraham, the first patriarch of the Hebrew people, prepared for his son Isaac’s sacrifice from this very spot.

The Kubbet es Sakhra or the Dome of Rock is an octagonal building with many gates, namely the Gate of Paradise ,Gate of Prophet David, West Gate and the South Gate .The external walls are covered with ornate tiles. Verses of Quran are written around the parapet walls. The mosque appears majestic, and is raised on a platform of white marble. The graceful gold dome adorns the city of old Jerusalem. As many as 45000 blue and gold exterior tiles were installed under Suleiman the magnificent in 1500. The shrine conveys its own message through colour and shape. In Islamic art, the color blue represents, the color of the sky and suggests infiniteness. Gold represents the knowledge of God.

There is a rock at the centre of the Dome of the Rock ,called the foundation stone, also known as the pierced stone because it has a hole in the South Eastern corner that enters a cavern below the rock, known as the Well of the souls. As of today, only Muslims are allowed to visit the shrine.

Dolphins observed to intentionally get intoxicated by playing with puffer fish