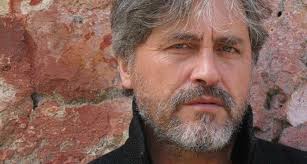 The Carpenter´s Pencil or O lapis do Carpinteiro,in Galician; is a book written by Manuel Rivas (born in A Coruña on 24th October 1957 during the fascist regime of dictator Francisco Franco). He is a Galician writer, essayist, poet and journalist. He is one of the most famous writers of contemporary Galician literature. The Carpenter’s Pencil quickly became the most wide-translated work in the history of Galicia literature. Most of the his books are a symbol of Galician identity and Galician cultural heritage.

In 2002, the film director Antón Reixa made a film based on his novel. The film has the same title as the novel based on.

This short novel narrates a love story between Daniel da Barca (a Galician republican activist and renowned doctor) and Marisa Mallo (daughter of a right-wing family) during the Spanish Civil War (1936-1939).

Da Barca’s movements were tracked by a soldier named Herbal. Herbal is the guard of Santiago de Compostela prison, where Da Barca is later arrested. The novel narrates da Barca´s experience while he was in prison: his relationships with other prisoners, with who he shared same ideals; the desire of Marisa to release him from prison, the jealousy and hate of Herbal.

The Herbal´s character is changing since he killed a republican artist who was a good friend of Daniel. This artist had been expended his time painting Santiago´s Cathedral with a carpenter’s pencil; belong to the book´s title. Herbal keeps the pencil, and places it behind his ear. The pencil as a part of the artist, it becomes the conscience of Herbal. The pencil is the tool that the painter uses to communicate with Herbal and to have influence in his decisions, saving in many times Da Barca´s life.

Da Barca is the story teller, sharing his memories of his youth with a prostitute at the whorehouse where he is working as a handyman.

Rivas creates two opposite characters. Daniel ,a self-committed person, faithful to his principles well educated and hero of the Republican resistance and Herbal a hostile person, disappointed with his life. He is tormented by his past and unrequited love affair with Marisa.

The Heritage of Sport : 1936 Summer Olympics