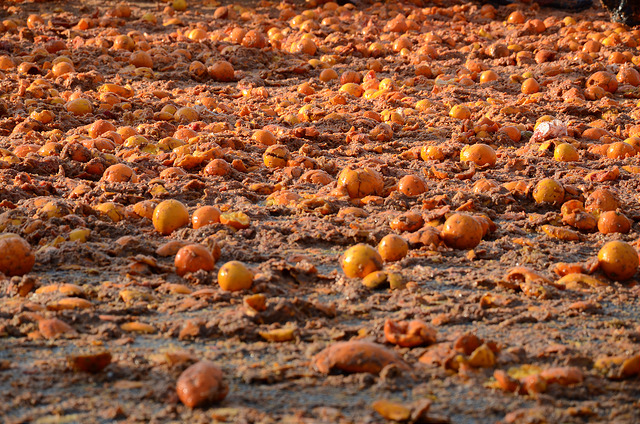 Sometimes a highly anticipated event or a festival can be more immersive than national holidays. The waiting and the long preparation people need to undertake before the start of the event makes them feel connected to it. A concrete example of this is the Ivrea Carnival, one of the most fascinating and addictive events Italy may offer. Ivrea is a marvellous town in the region of Piemonte, in Northwest Italy.  It has the oldest  carnival of Italy, and its traditions date back to Medieval times.

Its aim is to remind us of the revolt and the struggles the Medieval population went through in order to fight against their tyrant, the Monferrato’s marquis. He starved the city, pushing people to take action. The principal attraction which confers to this event such a great fame is the “Battle of the oranges”. It is based on nine differently coloured teams who need to throw oranges for three entire days in the main squares.

Each team (representing the peasants) has its own square to defend from those throwing oranges from wooden carts (representing the tyrant’s armies and siege engines) and trying to conquer the squares. The celebration could become extremely violent, as outsiders and tourists may be hit. To prevent this, people who do not desire to be involved in the “orange fighting” need to wear a typical red cap called “Berretto frigio” (Phrigian cap), which warns fighters to not aim at them.

One of the most fascinating figures of the Ivrea Carnival is the Miller’s Daughter, the character who sparked the revolt by denying the “ius prime nocti” (literally, from Latin, “the first night law”), a medieval law according to which she was required to copulate with her local tyrant before her new husband. Every carnival she wanders among people on the street, raising team spirit and handing out candies. Every year about 500,000 kilograms of oranges are estimated to be used during the fight. Despite this, Ivrea is extremely sensitive to food wastage, so it decided to import only uneatable oranges which cannot be utilised for anything else but for being thrown. Moreover, after these three days, a carpet of stepped and thrown oranges forms on the ground. The splattered fruit is gathered and is shared with the farmers nearby, who use these melted oranges for fertilizing their fields.

“Since wars begin in the minds of man, it is in the minds of men that defences of peace must be constructed”. This is the UNESCO preamble. It is one of the greatest sentences Mankind has ever conceived, and it perfectly fits with the “fight” of the Ivrea Carnival. It is basically a mock war that connects people instead of dividing them. The event preparation, the colours and the smell of the oranges, the festive and positive atmosphere Ivrea can offer create bonds and memories which can hardly be forgotten.

A visit to the Eiffel Tower, a marvel of engineering from the 1800’s

Marveling at the Pyramids of Giza