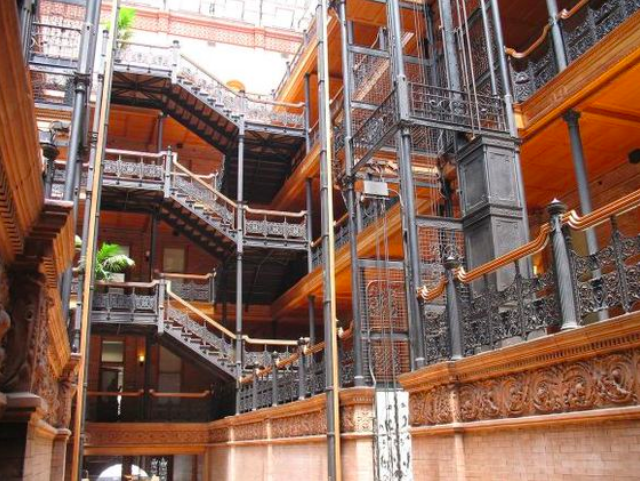 The Bradbury building in Los Angeles, California is the most signifiant architectural accomplishment. It was built for Lewis L. Bradbury’s monument to himself in 1893 and is currently the oldest commercial building in downtown Los Angeles. Located on Broadway and 3rd street is just another business building, but as one get looked at it, one will see it is extremely  detailed. Designed by George Wyman, it was inspired by the science fiction story looking backward.

When I first entered the building, I felt that I was greeted with dramatic stairs, detailed walls and dressed brick. Wyman who had no architectural background was asked by Bradbury to construct the building. The building was originally $ 1,75,000 but Bradbury put $500,000 into the building. Unfortunately the building finished after Bradbury died.

From the outside, the Bradbury in downtown L.A. just looks like a brick office building at the corner of 3rd and Broadway. It seems unremarkable, but the magic happens when you step inside. The Bradbury is basically a tall, narrow courtyard, walled in with terra cotta, covered with a glass ceiling, and flanked with two clanking hydraulic-powered elevators. The building has a classic design that gives on futuristic feeling. The color schemes of the interior architecture of the building are very notable and various combinations of lighting givers enchanting atmosphere.

This cool building is an amazing case of Victorian design. It looks absolutely unremarkable all things considered, to such an extent that I nearly passed it. Inside, in any case, characteristic light surges through the windows in the high roof, showering the iron-created stairs and lifts perfectly the five story structure.

The building is a mainstream vacation destination. Guests are welcome day by day and welcomed by an administration specialist who gives chronicled certainties and data about the building. Guests are permitted up to the principal arrival however not past it. Leaflets and visits are likewise accessible. It is near three other downtown Los Angeles Landmarks: the Grand Central Market and the Million Dollar Theater (opposite street) and Angels Flight (two blocks away).

In popular culture, the Bradbury Building is highlighted unmistakably as a setting in movies, TV, and writing – especially in the sci-fi genre. Most strikingly, the building is the setting for both the climactic housetop scene of Blade Runner (1982), and also the arrangement of the character J. F. Sebastian’s apartment in which a great part of the film’s story unfurls. The Bradbury showed up in music recordings from the 1980s by Heart, Janet Jackson, Earth Wind and Fire and Genesis, and a Pontiac Pursuit advertisements.

The building today, the aspect of this building makes it so unique is that although it is average commercial business building it has a design and architecture of a monument.The building now houses the Los Angeles Police Department’s Internal Affairs Division.
So, in conclusion, the building is architecturally significant of its staircase and unusual design.