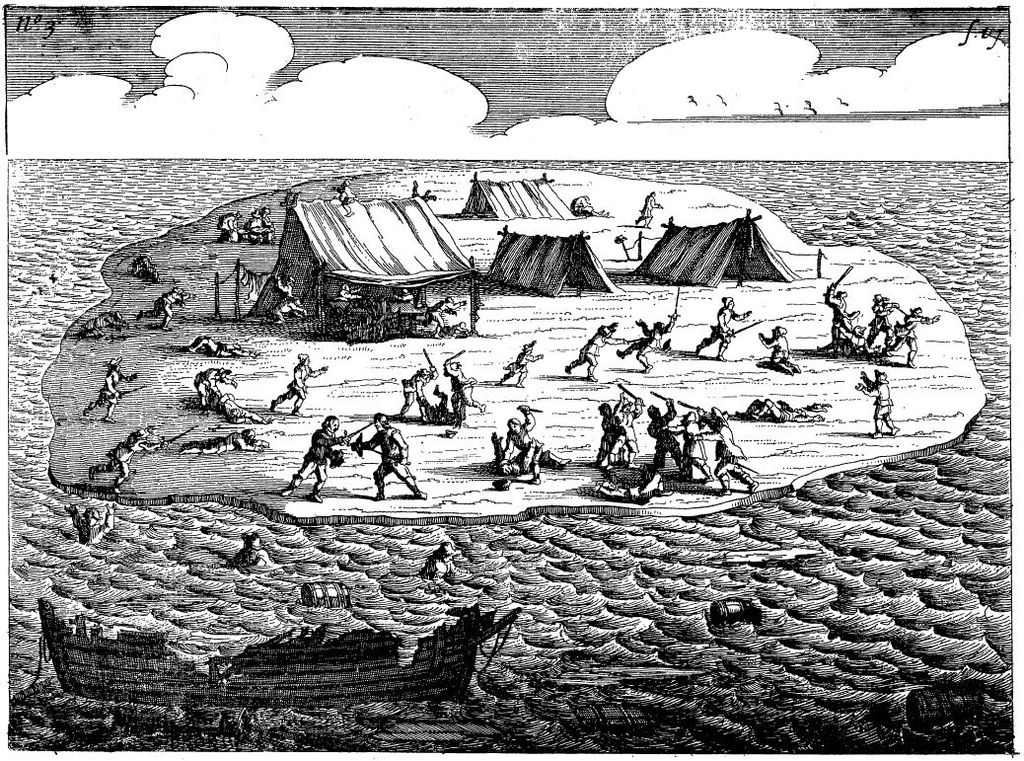 The wreck of the Batavia was discovered over three hundred years after it sank in the Morning Reef.

Through examining different items found at the site, its tale can be told– a story of mutiny, terror, and the first known European inhabitants of Australia.

Dutch coins, pottery, bricks and lead have been found amongst the wreckage. The remnants of a trumpet was also found on nearby Beacon Island. Trumpets had been used by the Dutch East India Company for signalling and ceremony. Engravings on the instrument indicated that it was made in 1628 in Germany.

The Batavia belonged to the Dutch East India Company, and was named after its new headquarters in the Dutch East Indies, the city of Batavia (now Jakarta). In 1629 it was on its maiden voyage, part of a convoy of seven which was to sail to the Dutch East Indies to trade. Around 341 people were on board. Most of these passengers were officers and soldiers, but there were also civilians travelling to the colony, including women and children.

By the time the Batavia entered the Indian Ocean, the captain could no longer able to see the other ships. By this time tensions were high on the boat,  particularly between the three men with most senior command- Commander Francisco Pelsaert, ship captain Adrian Jacobsz, and under-merchant Jeronimus Cornelisz, a man with little morals, who planned a mutiny at some point during the voyage.

In 1963 three local divers finally found the Batavia, under the ocean in the Morning Reef in the Wallabi Group of islands in the Houtman Abrolhos. The ship’s hull was raised from the ocean and rebuilt, and is now on display at the Western Australia Museum. For the more adventurous, dives are conducted on the site where you can see its cannons and anchors.

On the 4 of June 1629, the Batavia hit a coral reef 40km off the coast of what is now Western Australia. Most of the passengers survived, and set up camps on what is now called Beacon Island.

Commander Pelsaert, captain Jacobsz and dozens of other senior officers left the survivors, first in search of water, and then to get help. The survivors lived off the provisions saved from the Batavia, which in the days following Pelsaert’s departure finally broke apart and sank into the ocean, taking with it a number of men still living in the ship.

Extensive excavations have taken place in the islands around the Morning Reef, and are still going on today. Mass graves have been discovered, and skeletons are still being found. These have included the skeleton of an adolescent boy, and a skull which has suffered significant trauma.

In this chaos and uncertainty, under-merchant Cornelisz saw a chance to take over. He hand-picked forty men to be his cronies, and seized all the weapons owned by the survivors. His plan was to eliminate anyone who opposed him.

It started subtly, by sending groups, including women and children, to other islands off on fruitless missions he did not expect to survive.  If they did survive, he would send his cronies to murder them. He also ordered the murders of people still at the survivor camps. Men, women and children had their throats cut or were drowned. For those who managed to survive, the cost was high. Women were also raped by Cornelisz and his men, and men and boys were often ordered to kill others in order to save their own lives.

Remains of a fort

A stone fort on West Wallabi Island is the oldest surviving European structure in Australia. It is now just a small rectangle of stone, but represents the resistance to Cornelisz’s tyranny. The fort is now known as the Wiebbe Hayes Stone Fort, after the leader of the group which built it.

One of the groups Cornelisz had sent out on a suicide mission had been marooned on an island now called West Wallabi. They were led by a man called Wiebbe Hayes. Cornelisz fully intending that they would die of thirst and hunger, but Hayes and his men found fresh water, and even wallabies they could catch and eat.

They were alerted to the full extent of the massacres when a man managed to flee to West Wallabi using a makeshift raft. Now aware of Cornelisz’s treachery, they began to build weapons, and build stones structures which could act as forts. Knowing the threat the group now posed, Cornelisz sent out his cronies to kill them. A series of skirmishes followed, but just as all hope seemed lost, a ship was spotted. Pelsaert had finally found his way back to the remaining Batavia passengers, and Cornelisz and his men were arrested.

A number of the mutineers, including Cornelisz, were executed on Seals Island on 2 October 1629. Two of the mutineers, Wouter Loos and Jan Pelgrom de Bye, were marooned on the Australian mainland, becoming its first known European residents. Meanwhile the 116 survivors of the Batavia boarded rescue ship the Sardam, leaving behind the remains of their camps and the bodies of their murdered companions.

The wreck and areas where the Batavia survivors set up camp have been listed as National Heritage sites. More information can be found here: http://www.environment.gov.au/heritage/places/national/batavia

The Western Australian Museum has extensive information on the wreck and its history. Read more here: http://museum.wa.gov.au/research/research-areas/maritime-archaeology/batavia-cape-inscription/batavia

The trumpet found on Beacon Island has been extensively studied and recreated on the initiative of a man named Andrew Evans. In October 2016 he travelled to Beacon Island with the replica trumpet and played it near the site of the wreck.  See this article for more details: http://www.abc.net.au/news/2016-10-14/batavia-replica-trumpet-plays-shipwreck-site/7934444

Iceland Underwater Heritage – sky is not the limit

All That Glitters is, well, Zardozi!