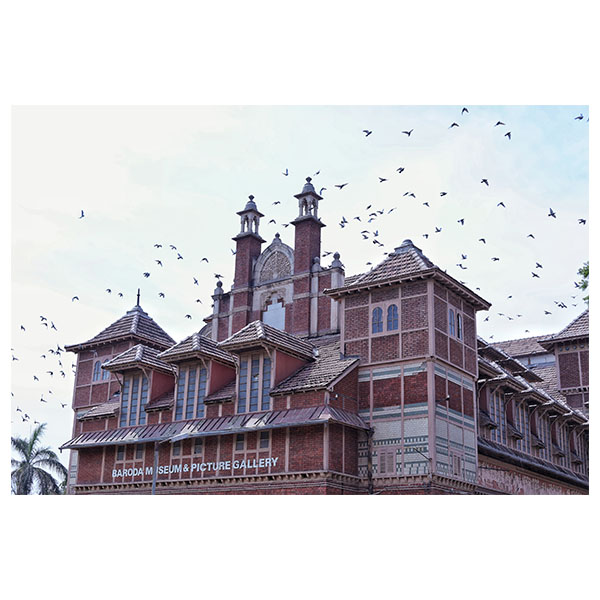 The Baroda Museum and Picture Gallery pays testimony to the evidently diverse and vibrantly amalgamated monumental heritage of the city and witnesses European influence in art and architecture.

Founded by Maharaja Sayajirao Gaekwad III in 1887, The Baroda Museum and Picture Gallery is located at Sayajibaug a vibrant public garden at the banks of river Vishwamitri that once breathed life to the city of Baroda. Vadodara the ancient Vadapadraka was a centre of learning and education and the  Maharaja truly cherished the traditional idea of being a benevolent benefactors of the people under his patronage. Baroda museum today possesses some very rare exhibits and enjoys an international reputation for being one of the best in the East.

While  strolling through the public park  you won’t miss the  totally hybrid looking structure, with the beauty of European facade mixed with Indian elements which never fails to astounds you. No other name than Robert Chisholm will come to your mind, he has left his mark  in the skyline of the city of Baroda,  enlightening the city with his Indo-Saracenic genius. Out of many architects who arrived in India with the British army’s Chisholm and Major Mant were the two architects who entirely changed the layered architecture of Baroda. The visual amalgamation is evident in the Baroda museum planned near the entry of the public park surrounded with fountains and lawns. The Museum remains open from 10:30am to 5:30pm on all working days with entry fees of 10rs.

The museum and the picture gallery are two separate two-storied buildings built in the Indo-Saracenic style of architecture. The general outline of the museum building is in conformity with the traditional local Maratha architecture of wooden framework filled with brick walls. But the ground floor has the pure European style, including a cornice decorated with a plaster copy of a Parthenon frieze. This way of designing the monumental heritage which lays the building on European plans but mixed Indian facades holds a peculiar identity in colonial architecture of India. The pure gallery building designed in a simple European brick style, but it has Indian columns and open pavilions on the roof. The two building are connected by a covered bridge passage. It was designed somewhat to resemble the Victoria and Albert Museum of London but R.B.Foote in 1895 noted, “Oxford University Museum had galleries similar to Baroda Museum.

The museum had light supplied from arched glass roof and this is one of the best kinds of lights that I have seen. I regard Mr. Chisholm’s design which high the building by light placed windows as far more suitable, all things considered.”