Art often becomes the novelty of a civilization as it washes away the dust of everyday life from the soul. The notion of Mural painting in Mexico very much subscribes to this notion.

The art of mural making dates back to pre-Hispanic time of the ancient Olmecs civilization. The Muralism Movement began in 1920 after the Mexican social and political Revolution of 1910. The objective of this form of public art was to promote a unified and forward-thinking country that regenerates itself after the revolution and open to modernization for the benefit of Mexicanos. At the end of the great revolution (revolt against President Porfirio Diaz) in Mexico, the new government embarked on transforming a divided Mexico of Zapatistas, Carrancistas, Maderistas into a Unified nation of Mexicanos.

To achieve this feat, it needed a medium with strong social potential that would depict the Mexican Life, promote the ideals behind the 1910 revolution, provide intellectual information on oppression, resistance, politics, the Mestiza heritage and the rich historical and cultural identity of Mexico to a populace that were illiterate and poor at that time. 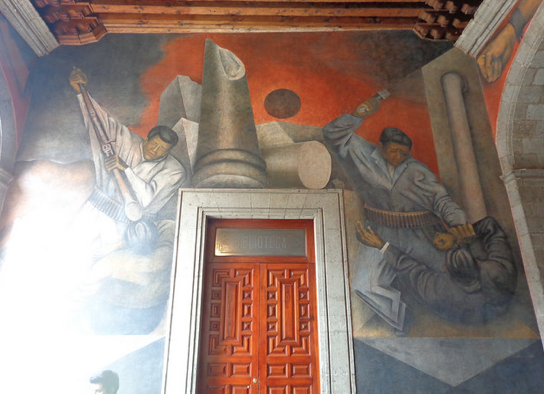 By consulting with artists like Gerardo Murillo AKA Dr. Atl (1875-1964), Josė Guadalupe, David Siqueiros, (1896-1974), Diego Rivera (1886-1957), Rufino Tamayo, (1938) to create visual messages (art) that would speak to the realities of the Mexican populace and open up the possibility of cohesiveness and inclusion of community within a people (socialism), The Mexican Muralism Movement was born. However, it has evolved significantly to portray capitalism, portray the industrial revolution and technological advancement. It is dubbed as pioneer predecessors of modern public art, creating an avenue where art is available and free for all class and not just for the elite.

The art of Mexican Mural making proved that fine art could be a valid communication tool to express the pride associated with cultural heritage, and recount the events that line the pages of history.

The Museum of Contemporary Art in Srpska

The importance of museums in Cividale