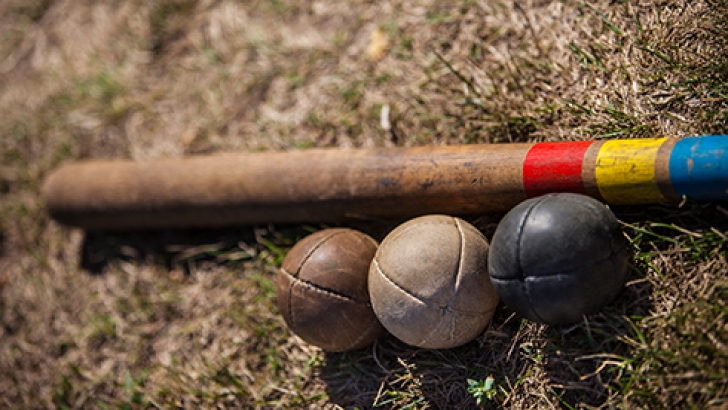 Oina game is part of Romanian heritage, although it is practically unknown abroad. Its name is supposed to be derived from the Cuman* word oyn which means game. Another theory is that the name originates in the Romanian verb a oina (meaning transhumance of the herds of sheep from the mountains down to the fields during Autumn). Moreover, many of the terms used to describe elements of this game are associated with terms used in sheep breeding such as baci (the shepherd) which is the captain of the team, bâtă (the bat), the player’s arrival on the pitch is known as intrare la strungă (entering the sheep den), player caught in the middle jucător la strungă (player caught in the sheep’s den), players who catch the ball pascari (players who guard the sheep).

There are several resemblances between oina and baseball. The origins of baseball have been studied during the more than 100 years, but the subject is dominated by controversy due to the lack of information. One of the theories is that oina was brought to US by the Transylvanian emigrants during the 19 th century, which inspired the creation of baseball by changing a few rules and declaring it as a new sport in  1839. But the truth is that baseball, as well as other modern bat, ball and running games have their origins in earlier folk games.

*Cumans – tribes with Asian-Turkish origins which had an influence in the area during the 11-13th century.

The pitch is a rectangle of 70m by 32m, which is divided in 3 parts: the “in game” zone, the “batting” zone and the “back” zone.
The game is played by two teams, each having 11 players: the attacking team and the defending one. At the halftime, the teams are switching positions. One game is taking between 30 minutes and one hour.

The defending team (the team at catch) is formed up by:

The purpose of the catch team is to catch the ball thrown by the bat team and it’s receiving points by hitting with the ball the players of the bat team while they are running the lanes.
The attacking team players have different roles as the game is advancing (in chronological order) – the team at bat:

The purpose of the bat team is to score points depending on the final position where the ball is thrown and to get its runner players (maximum 2 at each time) back without being hit by the ball.
Each team has one captain and 5 available substitutes.

Here is a video explaining the way of playing oina.

The main differences between oina and baseball

Oina was first mentioned back in the 14th century (1364), when the principality of Wallachia was ruled by Vlaicu Vodă (also known as Vladislav I). He, as a ruler, organized competitions across the region which have been included in later writings and plays.
But it was only at the end of the 19th century when oina became an official sport by establishing its own set of rules in 1899. This determined the decision of the Ministry of Education (led by Spiru Haret) to make oina practice mandatory in schools altogether with the foundation of a national championship.

Later, during the communist period (1945-1989), the sport achieved its place among the other mainstream sports like handball or cycling. There were plenty of clubs in the villages, big companies, police and schools which meant organizing a lot of competitions from local to national scale.

What happened after ’89? Unfortunately, oina joined the path of oblivion. The main reason: money. It could be also an adversity for the obligation of practicing this sport in schools during the communist period. It is a miracle it hasn’t disappear completely yet, but this is only the result of the tenacity shown by some passionate players, that kept teaching children. The only practice centers that are teaching the game can be found in a few locations from the countryside.
The main competitions for oina are still being organized each year: 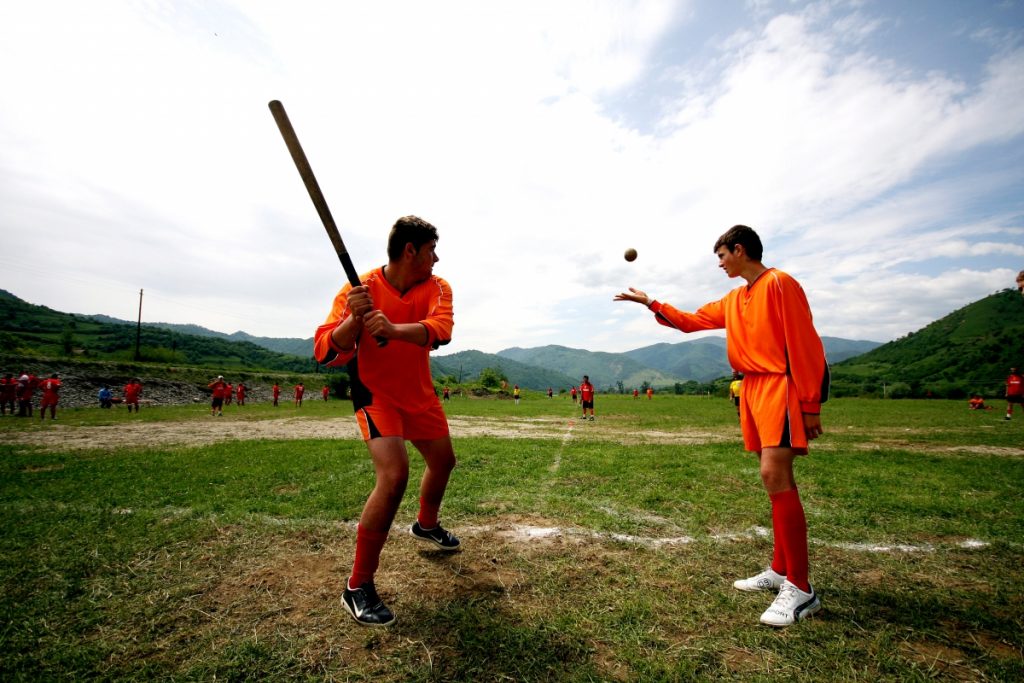 Due to its exclusivity, oina is played and known only by Romanian ethnics which makes this sport practiced only in Romania and in the neighborhood countries where important communities of Romanians are living. The official rule for having and International Federation is to first prove the existence of at least 3 National Federations. At the time, there exist only 2: the Romanian Federation for Oina and The Moldavian one. Currently, FRO is trying to spread this game and found new federations in countries like Bulgaria, Serbia or Sweden.
The special equipment is created by individuals for themselves, by those who don’t want to give up on this sport. The special materials though are difficult to procure (the ball for example is made by leather and filled with horse, pig or wild boar hair to make it flexible). They even tried to engage companies in this process but it seems that the demand was not big enough in order to make the business profitable. A lot of Romanians that don’t even know about the existence of this sport and could swear that the national sport was football (due to its popularity). There are local and national competitions of oina but the budget offered by the Ministry of Sports is for now the second lowest out of all the official sports in Romania.
But even if oina doesn’t bring money and fame as the mainstream sports, it is an exciting game still practiced and taught by passionate practitioners. During the past few years, things are hopefully redirected towards a brighter future. On the 3rd of July 2014, oina was officially declared the Romanian national sport. Among the supporters of this sport there is the Royal House (which is taking care of the National Championship – even if Romania is now a republic), the president of the National Bank, some mayors of villages and the people from the countryside.

Áyoàyó – Nigeria’s NO 1 board game

The Heritage of Sport : Make murra, not war!