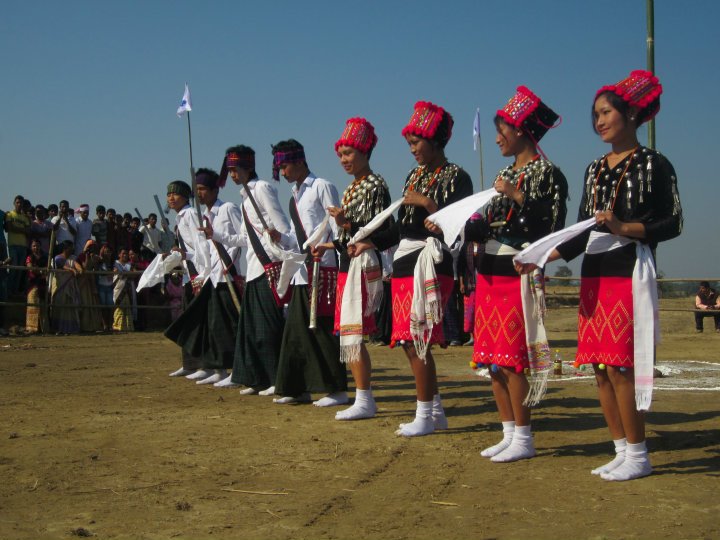 The high prevalence of handloom and textile made products has been indispensable to the heritage of north eastern states. This is indicative of the dressing of different communities in modern times too. Every village house hold has its own indigenous weaving style.

The historic Singpho tribe of South East Asia is no less in that respect. Elegant ethnic handlooms of the Singpho community are known for their striking designs coupled with application of many traditional organic materials for producing colours.

The Singphoes similar to Jingphoes, Chingpaws, Tneinbaw, Kakhieng, Kachin and Ye Jen are the inhabitants of Assam and Arunachal Pradesh, Kachin Land, Chan State and Wa State of Myanmar, Yunan Province of China and a few villages of Chinassgmai in Thailand, Tibet and Laos.
At present in Assam, they are mostly concentrated in Margherita sub division of Tinsukia district and in Arunachal Pradesh at Changlong and Lohit district.

The mainland of Singphoes are basically India’s North-east, China, and Myanmar. Singphoes were the most powerful and influential tribes of Patkai frontiers for several generations whom Afghan troops of British Army attributed as “Pathans of Burma” out of respect. Leaving deep traces in history of Assam, Singphoes have had a historic role in pioneering tea cultivation in Assam during the British reign.
Each tribe has their own, matchless, and magnificent pattern of designs. Considering wide usage of home-made traditional clothes, textile traditions is construed to be historically essential household industry producing a number of products in tribal society of north east India.

The very existence of weaving at home since time immemorial is lifeline of Singpho society. Here the principal role is played by women engaging its female populace within their community into weaving. Every Singpho woman is a skilled weaver possessing a strong sense of design. Within a household, special attention is given to a girl child in order to hone her skills in the art of weaving by the time she attains adulthood. So much so that, it is customary to offer a weaving set in Singpho marriage practices.

The women weavers have commendable intelligence and skills that include amalgamating different colors and crafting intricate designs. Traditionally, they have a very unique and natural process of colour making to colorize threads used for weaving which is completely environment friendly. For that, they use to extract colours from naturally available materials like plants, seeds and barks etc through a specific process as mentioned below:

The handlooms and handicrafts are integral to their existence. There are all sorts of costumes that a Singpho tribe member in a lifetime – and every outfit is hand-woven.

The garb worn by the Singpho tribe is very traditional, yet stylish. The Singpho women wear the khakhokhring. They wear a lower garment called as Bukang .They also wear the Nunguat which is tied above the chest. The belt called as Singket is used. They also wear a special dress adorned with silver pieces called as Kumphong Plong. In the Singpho society, one can determine the marital status of women based on their outfit.

The male member wear a lower garment called as Bupa or Baka and a white turban (Pham bam). Singpho men wear a black jacket and Bap (a cloth wrapped from waist down). A bapa is made of basically black and green threads. Another worth mentioning important ethnic attire of Singpho tribe is a traditional turban called the fumbum wore by both men and women. These colorful traditional dresses represent strong creative nous of Singpho women. Their intricate fabric and designs are descriptive of Singpho beliefs and folklore. These vivid designs made using natural colors bear different geometrical patterns and shapes. In an unfortunate event such as a death of a tribe member, the community pays its homage to the dead by offering a special cloth woven separately called Mizip Omba.