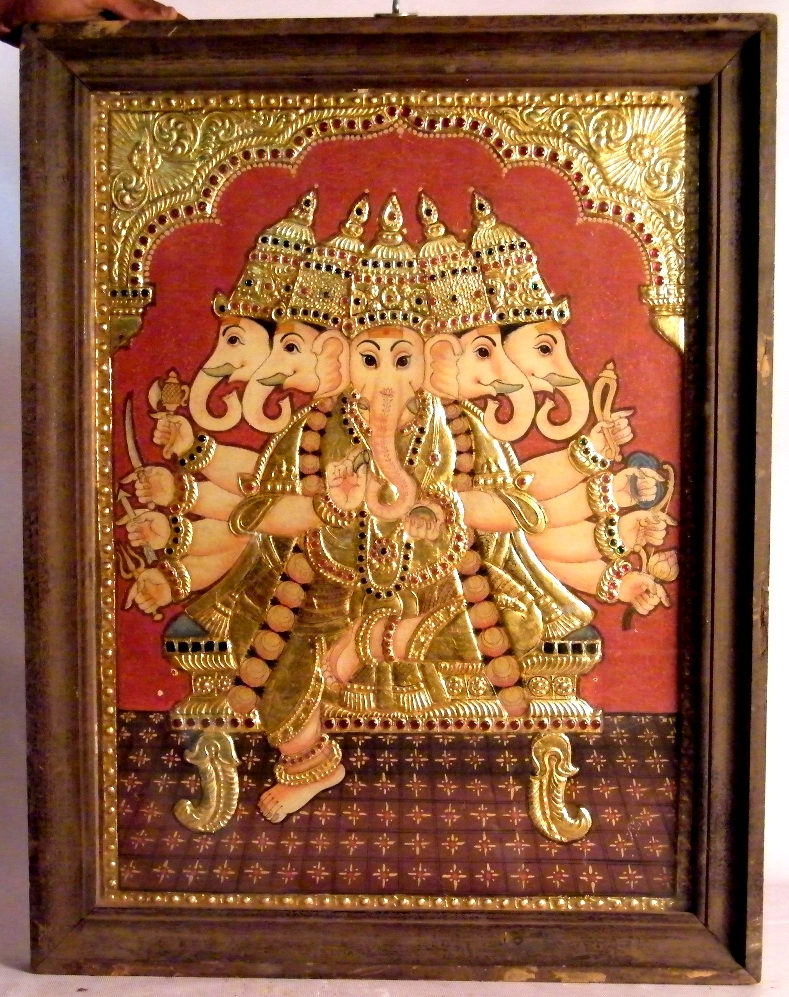 Tanjore: Rings a bell, doesn’t it? As soon as we hear a mention of it, we find ourselves picturing vibrant colors, royal, religious subjects (deities, gods and goddesses), precious stones and most importantly gold-yes, lots of it! Quite so, there is much more to the art of Tanjore than what meets the eye. A Tanjore painting is not just a royal adornment to your wall, but it is a gateway to its colorful past and to its bright future.

The Tanjore paintings are said to have originated from The Vijaynagara Empire in Karnataka.  But with the fall of the kingdom and the defeat of Hampi in the Battle of Talikota in 1565 CE, some of the painters had to migrate to Thanjavur in Tamil Nadu. They were given patronage by the ThanjavurNayaks (Rulers of the Thanjavur principality). But the Tanjore art went through a transformation when the Marathas defeated the ThanjavurNayaks in 1674. It is then the Tanjore art absorbed the local Maratha culture, thus giving rise to a unique style.

It takes immense precision, patience and skill to bring out the allure of Tanjore. The first step involves drawing a preliminary sketch of the image on a wooden base, which is then applied with a mixture of zinc oxide and chalk powder with water soluble adhesive. The sketch is then adorned with thin gold sheets (22 carat), precious and semi-precious stones, cut glass and pearls. To further intensify the glory, the parts left are colored with vibrant poster or natural vegetable colors.

Initially Tanjore art was only used to decorate temples, but soon after its popularity in the region, the painters were asked to decorate palaces, buildings, chatrams etc. Initially Tanjore paintings were used for the purpose of worship, but slowly they started gaining acknowledgement for their exclusive style.

The beauty of Tanjore is still very intact and can be seen in many temples of the south – most popular being the Brihadeeswara Temple and the Kumbakonam temple. However, for the past few decades or so, one doesn’t have to visit the temples or the lands of the south to admire the beauty of this exquisite art.The elegance of Tanjore is being brought to homes by a number of people. Many art dealers are now dealing with the Tanjore art and exhibitions are being held not only in the south, but in all the four metros with paintings worth between Rupees 25,000 to 2 lakhs. While most art forms have failed even in their regions, Tanjore is one such school of art that has achieved fame in almost all the corners of the nation.

Padmaja Bhalerao, a Tanjore artist based in Hyderabad says, “Although Tanjore has always been popular in the South-mainly in Chennai and Hyderabad; a lot of orders are now coming in from the Marwari community.”

“The orders were first restricted to deities like Krishna and Lakshmi but are now embracing a more Rajasthani theme such as that of Sati Mata, Trishul, Santoshi Mata etc,” she says.

But some Tanjore artists based in the north feel that people need to be made aware of the significance of this art form. “While a lot of people buy Tanjore paintings, but they have very little knowledge about it. I think to promote this art, the Tanjore artists in the North should organize exhibitions frequently and talk about its history, and the intricacies that go into its making,” says Uttara Nighoskar, a Tanjore artist based in Uttar Pradesh.

The popularity of Tanjore has come with a limitation of its own. Today many people are compromising on the art form by using fake gold and fabricated stones. Moreover, this art form is being commercially exploited as it is passing through the hands of many middlemen. By the time it reaches its customer, its price multiplies manifold.

Another issue of concern is that the old paintings much closer to its original form are not being well taken care of; the paint is peeling off, stones are coming off and the frames are breaking. As everyone is busy buying new Tanjores, they are failing to save its legacy.

It is true that Tanjore has a market all around, but does that really preserve our culture?  Many proud Tanjore owners aren’t aware of its history while many artists are compromising with the art’s original style to suit the need of the buyers. All this might cause Tanjore to drift away from its originality and authenticity. While a lot us are trying to revive lost art forms of the Indian culture, is it possible to lose an art to its own popularity? Should age old art forms develop to suit the modern mind?