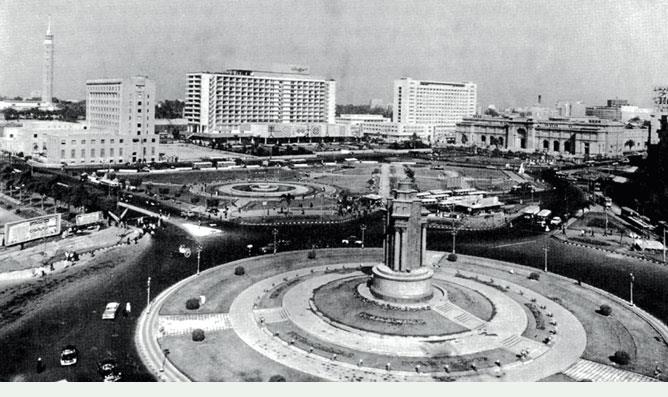 According to the contributions of Mr. Marc Treib in UNESCO World Heritage manual, public spaces are each open destination that to be accessible for the audience serving the urban community. These destinations are where the local people gather spending free time, or interacting socially. “Louis Kahn talked about ‘going away from’ spaces and ‘going to’ spaces.”(Treib, 2003, p. 136) Moreover, according to the quote of Mr. Charles Birnbaum in UNESCO Expert Meeting October 2001, the public spaces are a significant historic source and need a special preservation technique. (Oers, 2003, p. 13)

Highlighting the modern heritage especially the nineteenth century antiquities, I would like to draw the Egyptian authority’s attention to the results of the commission of Documentation and Conservation of the Modern Movement (DOCOMOMO) which has been conducted in 1992 regarding the International Council on Monuments and Sites (ICOMOS) invitation. The commission members did a study about founding a tentative list for modern heritage attractions that might be inscribed on the World Heritage List.(Oers, 2003, p. 11)

Based on the former prepared study, UNESCO World Heritage Center, ICOMOS, and DOCOMOMO announced in 2001 a joint program on Modern Heritage identifying, documenting, and promoting the nineteenth and twentieth centuries architectural heritage.(Oers, 2003, p. 8) Therefore, DOCOMOMO has developed standards distinguishing the high significant modern heritage (‘the Icon and the Ordinary’). “For the greater part of Modern Movement architecture and town planning, instead of preservation, comprehensive documentation has offered a good alternative to safeguard ideas, heritage and memory.” (Oers, 2003, pp. 10, 11)

Hence, I would like to view the perspective of Mr. Fabio Grementieri for conserving the nineteenth century heritage. He mentioned that identification and documentation is conflictive and complex process, consequently the modern heritage requires high effort, nationally and internationally for conserving its cultural value. Also, he referred to a technique which addressed to highlight the structure’s integrity and authenticity. (Oers, 2003, p. 14)

Actually, since the beginning of nineteenth century, Egypt has been became a great attraction, a second home for Italian artists, architects, engineers, and builders who have left a magnificent imprint on Egyptian architecture embodying in the Modern Cairo constructions. Those forerunners seek to involve in the Risorgimento risings in and after the “golden days of the Khedives”.(Pallini, 2006, p. 40)

For Egyptian people, Tahrir Square is recently considered a common landmark containing various facilities such as means of transportation, cultural buildings, restaurants, governmental authorities, scientific entities, and so on that to make a dense environment of continued activities. So, it was taken as one of prime example of public space in Modern Cairo. It is situated in the center of Egyptian political capital Cairo where Khedive Ismail wanted to commission the new downtown district’s ‘Paris on the Nile’ design. This square was originally known “Ismailia Square” for the name of Cairo at that time “al-Kahira al-Ismaileyya” becoming the main square of the palace districts. After 1919 revolution, Egyptian call it by “Tahrir (Liberation) Square” that they were wished evacuating the British army. Then, after the coup of military forces in 1952, square was officially renamed “Tahrir Square” in 1960. (Al-Sayyad, 2016; “Cairo,” 2016; Iskander, 2005)

Tahrir Square has witnessed much historical events which created the Egyptian contemporary history. In 1952, Egyptian people gathered there celebrating the birth of Egyptian republic eliminating the monarchy and putting a statue of president Gamal Abd el-Nasser in the Square’s center.(Iskander, 2005) Then, this historical square was also witnessed one of popular uprisings “The Egyptian Revolution 25th of January 2011” attempting to damage all traces of the previous regime.

This old square contains numerous historical buildings such as Egyptian museum which was designed by a French architect Marcel Dournon and inaugurated by Khedive Abbas Helmi II in 1902. Moreover, Square consists of other four main buildings like the Arab League, the palace of Khedive Abbas Helmi II’s sister, Tahrir Complex “Mugamma’ al-Tahrir” housing numerous governmental administration offices, and American University campus which was originally constructed in 1860 for Education Minister. (Iskander, 2005)

Piazza Sant’Antonio, No. 6, Gorizia, Italy: It’s Not Just An Address

Dilly-dallying in Delhi: Public spaces in the Capital