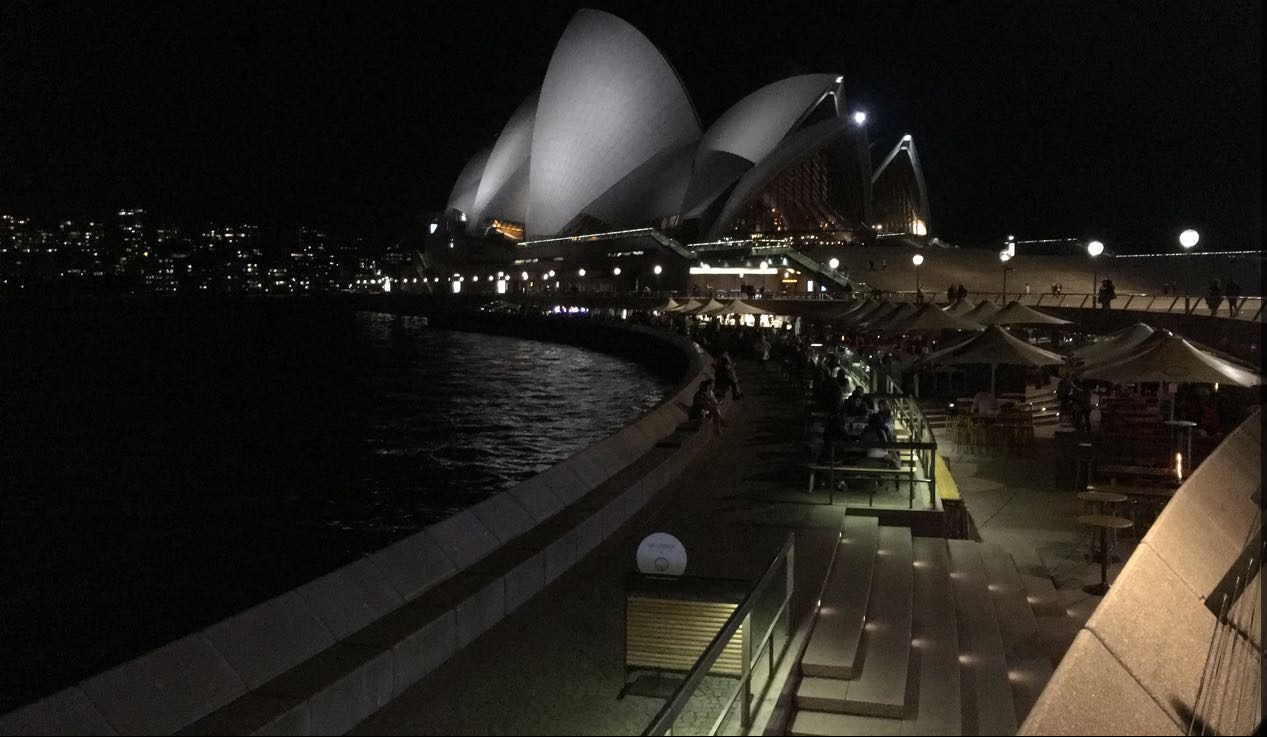 Isn’t the city of Sydney synonymous to the ‘Opera House’? That was the intention while designing the iconic building, but little did Jorn Utzon know that his piece of architecture will overshadow the other features of the city. Prior to visiting this illustrious city, I had formed a set of preconceived notions about how the entire experience would pan out and to my musing, I was thoroughly mistaken. Throughout my travels, I realized that beauty lay not in the city, but in the conglomerate of elements- the architecture, the culture, the people and most importantly the food. It was during this time that I realized that in the scheme of biological evolution, we should be equipped with more sensory features so as to imbibe the culture as a whole. My trip lasted for a fortnight, but boy did time fly!

After an exhausting flight from Delhi to Sydney via Guangzhou, in all honesty, even the excitement of traveling to a new city could not compensate for the awful sprain in my neck that I had conjured up during the 12 hours of flying. I wish I was a Koala, I’d have slept it off. Trying to brush off the sprain, I got myself around to absorb the moment that this was actually happening, I was actually in Australia.

So after traveling to the hotel room which was located harbourside, I crashed into bed, eagerly awaiting for what lay ahead the next day.

A 45-minute drive from the CBD area of Sydney towards the west of the city sees the towering ‘Blue Mountains’. Although geographically do not classify as a ‘mountain range’ but due to the monotonous contouring of the landscape, the Aussies had devised another way of naming their relief features- any landmass that rose up to a 1000 m or so, categorically classifies as a mountain range, which was one of the reasons why this section of the ‘Great Dividing Range’ was called what it was.

For the history enthusiasts, Blaxland, Wentworth and Lawson were the three pioneers who traveled from Sydney across to the west of these mountains, their work being so extensive that the path in use today is the same as that used by the explorers.

Throughout the journey, the eucalyptus trees extensively comprised the flora of this area, so much so that they form about 90% of the total foliage. One could question why I was staring out of the window and not interacting with the rest of the group on board. Well, for starters, the group was culturally too diverse with people from China, Malaysia, UK and the US all being represented and it was during then when I realized that all humans are descendants of the Neanderthals- people all across the globe preferred to snooze rather than interact with each other.

So, I chose to occupy myself by bombarding the guide with all sorts of ridiculous questions like, ‘Why were the Blue Mountains called Blue?’, and it turned out that it wasn’t as baseless a question I had assumed it to be. The oil molecules that tend to scatter light in the wavelength range of about 450 nm ( that is of the colour ‘blue’) are released during transpiration from the leaves of the Eucalyptus, thereby adding up to collectively radiate a blue halo from these mountains. And that folks, was the most impressive answer to the most baseless question as has ever been documented in the pages of history.

After spending a couple of hours at the Mountains, we returned back to the city, only to be mesmerized and enthralled at the sheer dominance that man thought to possess over nature and how subtly it retorted back at the skyscrapers in the sky, reminding them of their hierarchy on the pecking order.

Waking up to the Harbourside bridge was too picturesque to be true and with the entire skyline of the city in view from our hotel window, if ever there was bliss, that was it. Nothing could deter my attention form that of the entire setting as I was too keen on trying to store that image for the rest of my days. It’s during moments like these that one realizes how priceless such moments are and how if ever we happen to stumble over these, we must not let them go by, unnoticed and unattended to.

That particular morning, my family and I, wandered across the streets of the city, all of us in absolute awe at the rich history and culture that was reflected upon the facades of every building in view. The setting resembles that of an orchestra being orchestrated by us, the architecture resonating a tune in absolute harmony with the ambiance. One must experience it as that feeling cannot be penned down in words.

In addition to being one of the most expensive cities to live in, Sydney is also called the ‘Tunnel Capital Of Australia’ due to the extensive tunnels that are hollowed out from the pre-existing bedrock of sandstone. Various sections of the city like the ‘Rock’, ‘Downtown’ or ‘Harbourside’ are all a conglomerate of architectural styles ranging from the Victorian facades, a consequence of Australia’s ties with the British Commonwealth, to a more modernistic form as in the case of the Convention Centre at Harbourside. It is mind-boggling to get know that the native tribe of Australia, the Aborigines, have inhabited the mainlands for the past 60,000 years, with 300 sub-communities all having their distinct language, their population adding to about 1.6 billion in number. The foundations of this iconic city were laid down by these very men, truly a remarkable feat. The appeal to the city is like no other and would recommend every traveler to surely explore the street life of this robust city. The squiggly design on the highway of the Parramatta River in Sydney was conceived in the 1970’s its Aboriginal meaning being, ‘Where The Eels Are’ and hence the symbolism.The Indian-Pacific is a train that connects Perth to Sydney, another means of transport via which you can commute to and from the city. Regarding the food, you need not worry as there are cafes and restaurants on board: a lavish ride one must say!

Having exhaustively spoken of the city, there are various other destinations in and around Sydney which may not be noted in your conventional travel guides, however, missing them would be amount to a crime of the highest degree in the jurisdiction of travelers and those who aspire to travel.

The Vibrant Village Of Leura

Located on a dormant volcano, this village is a tad expensive in comparison to the neighboring suburbs. Although, the expenses that are to be procured in the shops are compensated by the stunning sights on the streets of this village: magnolia and casuarina trees adorning the entire block. Be sure to carry a camera as you would not want to miss out on this picturesque location. The visit to this village became all the more special to me since it was here, that I tasted the traditional Aussie breakfast, ‘Banana Bread And Butter With Hot Chocolate’, and all I wanted to do is have breakfast for every meal in the day! The way that the butter balances out the bitterness of the coffee and the bags of flavour that the bread brings to the palate is simply a recipe conceived by a heavenly being. Thus, to sum it up for you, the entire experience of the village will be nothing short of paradise.

‘Woolloomooloo’ Area And The Hyde Park

The naval area of Sydney which house the Australian fleet, its name has an Aboriginal origin and means a ‘Baby Kangaroo’ in the native tongue. The largest finger wharf in Sydney, one will be thrown back into the past during a time when the women came out to wish their husbands farewell as they embarked upon their journeys, to a time when the return of these men was not a certainty owing to the unpredictable nature of war. One is transported to the past, where the threats of the Japanese, hovered over the Australians and the tense atmosphere that would have been created during the times of the horrific World Wars.

Just a few blocks away is the Hyde Park, which is credited for the augmentation of the first Australian horse race way back in the year 1810. Even till this day, the park has retained its original oval shape as a reminder of its past. The Anzac War Memorial is located in this park and a tribute is paid every morning to all the soldiers of Australia and New Zealand that lost their lives during the various wars.

In these places, one is reminded of  the horrors that a city has to undergo in order to develop and thrive as one of the most iconic cities in the world, something which I think is very important even in the lives of human beings- to know one’s roots and to not take things for granted.

Before I had perceived the progression of the calendar, it was time to leave this incredible city behind. Despite having a heavy heart, I was encouraged by the fact that I had imbibed so much of the culture on offer and had managed to store whatever I could, as mental imprints which would transport me back to the city, whenever I pleased to do so.

From the little that I could conclude of the city, I must say that all future architects should venture into its meticulously designed landscape and the rich vocabulary of architecture that it has to offer and as for travelers, they are ought to be mesmerized by the charm and the warmth that this city radiates.

Traveling to cities around the world, only makes us grow as an individual and makes us more complete in the spiritual context of the word. For many, it is a passion that drives people to the corners of the planet, however, for others, it is a medication and has therapeutic effects, those that are capable to cleanse one’s soul in his quest for the ultimate truth. I leave you with this musing, an excerpt taken from the famed poem by Robert Frost, ‘The Road Not Taken’. I hope that my thoughts have resonated with yours.

The Aeta Community of Pampanga

The identity of Cuenca