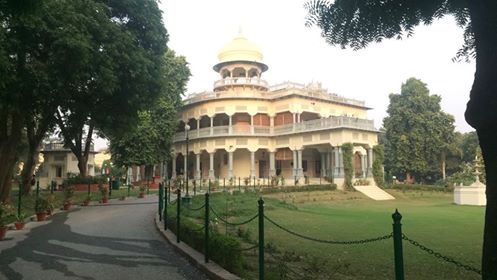 This house went to become the birthplace of the Indian Freedom Struggle against the British. The house was originally named Anand Bhawan (Adobe of happiness), but later, Moti Lal Nehru renamed it to Swaraj Bhavan. This house was used as the headquarters of the Congress Committee, and served as an important site for the freedom struggle movement.

Moti Lal Nehru Bought this bungalow to match the status of upcoming legal luminaries in Allahabad. After purchasing the house, he renovated it and refurbished it with electricity, water and other advanced amenities. The furniture, tapestries, china and glassware were personally handpicked by Moti Lal Nehru.

This house displays a host of historical souvenirs, and is associated with many important campaigns in country’s fight for freedom. The joint Congress-League committee met in 1916 at Anand Bhawan. It was here that the first foundation of non-cooperation movement was laid in 1920 by Mahatma Gandhi who was then residing here. During the non-cooperation movement, Jawaharlal and Motilal were arrested from Anand Bhawan on 6 December 1921 and sentenced to six months’ imprisonment and fine. As it was the policy of Congress not to pay fines, the police carried away bits of furniture. They took also other articles such as carpets, silver, the car, whose value was far in excess of the amount of the fine.

Swaraj Bhawan became the rendezvous spot for many freedom fighters and this was the place where the future policies related to India were shaped. Motilal dedicated Swaraj Bhawan as a structure to be productively used to serve the nation on 9 April 1930 during the civil disobedience movement. It remained the headquarters of the Indian National Congress until the office moved to Delhi in 1946. The Nehru’s built another house next to the old one and named that Anand Bhavan; the old house was renamed Swaraj Bhavan (lit. Abode of freedom). In 1970, Indira Gandhi, India’s then Prime Minister, donated Anand Bhawan to the nation. Both are now turned into museum throwing light into the lives of the Nehru family and the struggle led for their nation.

The other side of the museum showcases the life of Indira Gandhi who was born in this very place and served as the country’s fourth Prime Minister. Indira Gandhi’s legacy and memory are an important part of post-independence history. Born as Indira Priyadarshini, she had been part of India’s freedom struggle since her childhood. At a young age, she helped create ‘Vanara Sena’, a children’s club that ran errands for freedom fighters and conveyed messages for them.

The story of India’s fourth prime minister is nothing short of courage and valour. From a young age, she accompanied her father, Jawaharlal Nehru, a prominent freedom fighter and Congress president for two consecutive sessions, to important events and tours to garner support for India’s freedom struggle. During Jawaharlal’s imprisonment, he stayed in constant contact with Indira and took interest in her intellectual development. He wrote several letters to Indira Gandhi from jail and a few of those letters were collected and published later as ‘Glimpse of World History’. After India gained independence, Jawaharlal Nehru became the first Prime Minister of independent India. Indira often accompanied him on domestic and international visits and sometimes acted as an emissary.

Later when Indira was chosen the first female Prime Minister of India, she faced numerous obstacles such as drought and food-shortage, but she was determined to make India self-sufficient. Development of the nation was her sole agenda. She initiated many pioneering projects.

Both the houses, Swaraj and Anand Bhawan, are now turned into museums, and nearly 80-100 people visit the museum daily. The Nehru’s played a major role in the fight for freedom and in shaping the post-independent India. They dedicated their lives to the nation and its people. In this house, as in the hearts of the people whom they served, the memory of the Nehrus is enshrined forever.

The first ever underground museum in Bangladesh

A crawl through the depths of the National Museum, Delhi