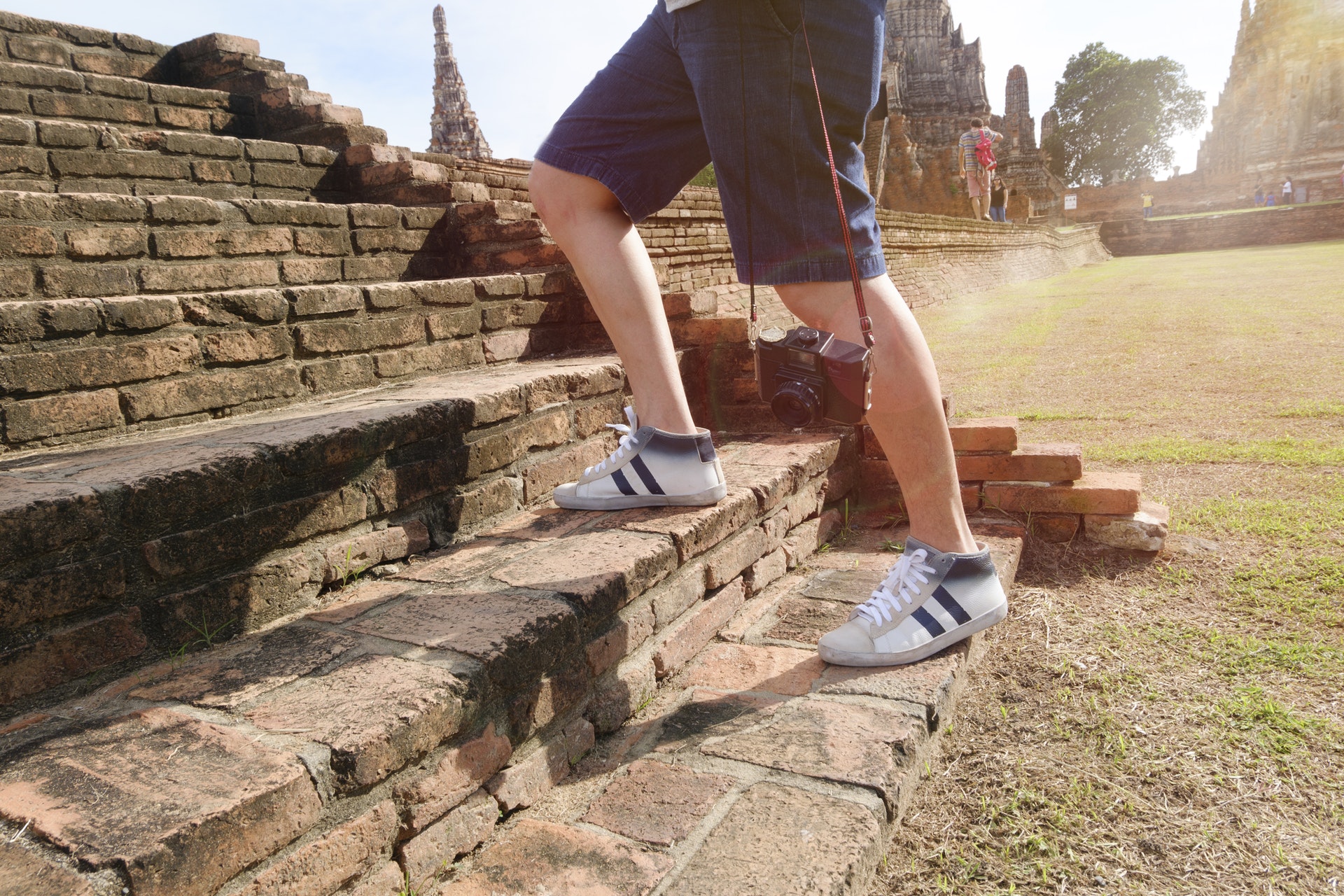 As a marathon runner, I try to run in as many cities or countries as I can. “Runcations” have been a huge part of my life – planning vacations around running events, and taking non-runner family and friends along too. When I started running, it was a great way to explore my home city and it turns out running is a great way to explore other cities and nations as well. Plus, official races purposely have their race routes set through landmarks of their cities, so out-of-towners can combine sight-seeing with racing. However, running in places of heritage was a completely unique experience.

Read what happens when sports and heritage combine.

A few months ago, I had participated in the Go Heritage Run – Ooty – a running race set in the Nilgiri Mountain Ranges of South India. The venue for the run was the Lawrence School in Lovedale – founded by Sir Henry Montgomery Lawrence in 1858. The campus of 750 acres is located at a height of 7200 feet above sea level, slightly lower than the Dodabetta peak (the highest peak of the Nilgiris at 8650 feet). This is where we had to run – on a hill station located on a mountain range, through forests and meadows, and heritage buildings, and chilly weather – a place seeped in history and geography, testing one’s strength and endurance. If this was not enough to add to the “runner’s high”, the finisher medals we received were handmade by the indigenous Todas. The race organizers had tied up with NGOs working with the local community to make these “souvenir medals” for all race participants – giving the runners something to cherish back home, and also providing a source of livelihood to the local tribes. 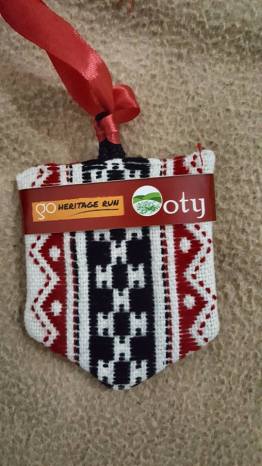 I had enrolled for this particular race as a travel-run holiday – the venue and route seemed promising. But it was the medal that really caught my attention. The embroidery is called pukhoor and this craft is GI-certified – it can be called so only if made in the Nilgiris. Post the race, I looked up the race organizers and found that this is a recurring theme for all their events – the routes cover heritage places of the specific town/city, and the medals are handcrafted by local artisans. Their medals are a sample of the art, with the hope that these will bring more awareness about the arts and artisans.

The medal presented at Orchha (Madhya Pradesh) was a traditional painting of Bundelkhand called lipna. The canvas is first covered with a mixture of papier mache, black lentils, fenugreek and gum, dried to make a textured background. Red clay or geori is used to paint the border and the silhouette of the subject. This is dried. Then, the design is refined by hand scraping the geori off with a pointed instrument so that the background shows through. The eldest of five girls from a potter’s family in Orchha had made these medals for the Go Heritage Run – Orchha. 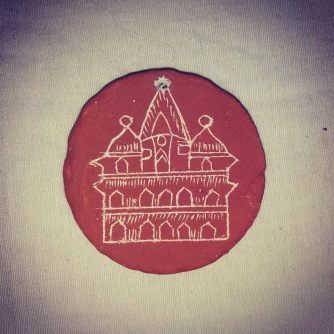 The Hyderabad finisher medals were made of lakh, a resinous secretion of plant sucking insects colonize on the branches of host trees to produce scarlet resinous pigment. Hyderabad is famous for its lakh bangles and the Lad Bazaar area near Charminar is the main production center for these bangles. Usually they are embellished with colored precious and semi precious stones. Faux pearls and a much simpler design were used for the race medals, handcrafted by an artist from a bangle shop near Charminar. 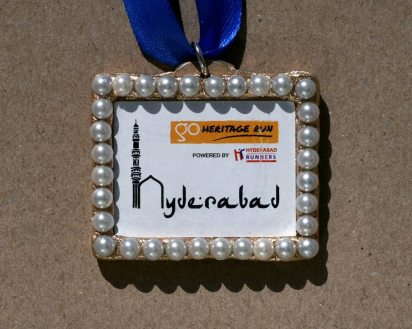 The finisher medals of the Go Heritage Run – Halebidu (Karnataka) were made out of stone – inspired by the soapstone temples. And the grid of rotating squares and star-shaped layout outline the Hoysala temple architecture. 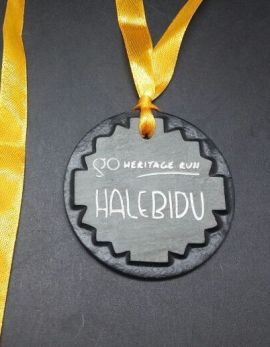 These were just some of the race medals awarded at running events in 2017. It is heartening to know that this organizer does its bit to promote culture at each of its events. Every art form – painting, embroidery, sculpture, and craft is rooted in the history of a place. Every art tells its own story about a place and the people who inhabit it. This is what makes the arts so culturally significant. Using race medals as souvenirs to bring attention to and provide knowledge about indigenous cultures is an ingenious way of promoting the arts. A marathon race organizer bringing attention to the culture of a place through art shows us the myriad possibilities of learning and promoting culture that go beyond touristy gift shops.

*Additional information about races and souvenir medals was sourced from www.goheritagerun.com – the organizer of these events.

This temple adorns the wedding sequence of lord Shiva and Parvati