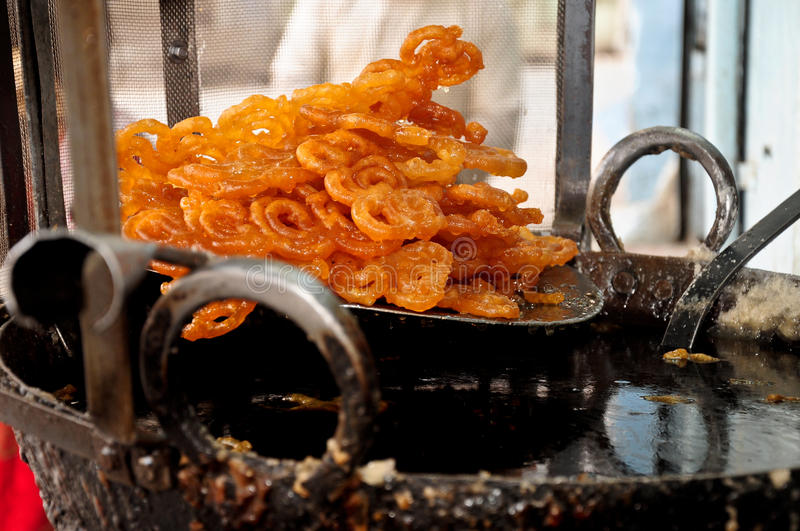 Yes, you heard me. Jalebi isn’t Indian. The crispy, coiled, orange desert that is loved all across the Indian subcontinent is actually not of Indian origin but is an import from West Asia (Persia and Turkey to be specific). And you can thank the Silk Road for this. The Silk Road connected China to Rome, and by doing so, it encouraged the cultural diffusion across the Asian continent. Merchants, craftsmen, artisans and traders often traveled across the lengths of the Silk Road, carrying with them products like spices, crafts, precious gemstones, gold and of course, silk even after the collapse of the Roman Empire. Along with their products, merchants often carried their own cultural heritage as well. This is how the Jalebi, among many other Persian and Arab dishes eventually made its way over to India.

The earliest reference to Jalebi dates back to the 13th century, in Muhammad bin Hasan al-Baghdadi’s famed ‘Kitab al-Tabeekh,’ a cookbook featuring a collection of dishes during his time. This book mentions a fried, spiral desert called “Zulabiya,” which would be served to the poor during the iftar gatherings in the holy month of Ramadan. According to Hobson-Jobson (a glossary of colloquial Anglo-Indian words and phrases compiled by the University of Chicago), the term Jalebi is derived from Zulabiya.

Today, you see several regional variations of Zulabiya across the continent, including the Indian Jalebi. Across Asia, Zulabiya came to be known through names such as ‘jilipi’, ‘jilbi’, ‘zelapi’, ‘imrati’, ‘jilapir’, ‘jahangiri’, and ‘pak.’ These names also came with slightly altered recipes. Some communities made their Zulabiya with rice flour, and others used baking powder, wheat flour, semolina or even besan (a kind of chickpea flour) to prepare their Zulabiyas.

And it didn’t stop just there.

The West Asian Christian Community serves Zulabiya at Epiphany or Theophany feasts with cinnamon powder and confectioner sugar. Lily Swarn also writes that the first ice cream cone was a version of the Iranian Zalabiya, used by a Syrian immigrant to United States Ernest Hamwi. In Maldives, Zulabiya is known as “Zilebi,” and in Nepal it’s called “Jeri”- a possible reference to the Mughal Emperor Jahangir (or Jehangir as it is also written sometimes.) In the North African countries of Algeria, Tunisia and Libya, Zulabiya resembles a type of pastry which is made of flour, sugar, honey, yeast, and cardamom seeds. However, in the countries of Yemen, Egypt, Lebanon, Syria, Iraq, Comoros and Algeria, Zulabiya resembles a doughnut.  And then in Sri Lanka, the Pani Walalu also may owe its origins to the Iranian Zulabiya, along with the Spanish Churro.

Furthermore, Zalabiya Mushabbaka and Zalabia Duniya are also modern descendants to the ancient Iranian Zulabiya. According to Lily Swarn, Zalabiya Mushabbaka are latticed fritters with varying shapes- balls, squares, and even discs at times. According to recipes from the Caliph’s kitchen, the dough of the Zalabiya Mushabbaka are made of milk, ghee, pepper and sugar- after the dough is fried, it is dipped in a concoction of clarified honey, rose water, musk and camphor. Zalabia Duniya on the other hand are stick shaped sponge cake versions served during Ramadan celebrations.

How did the Jalebi come to India?

Jalebi was introduced to medieval India by Persian-speaking invaders and was known to them as “Zaalabiya.” Unable to pronounce Zaalabiya, Indian locals at the time pronounced it as “Jalebi.” By the 15th century, Jalebi had become integral to the cultural landscape of India. In Jinasura’s Priyamkarnrpakatha (1450), Jalebi is described to be relished in the gatherings of wealthy merchants. Jalebi also had become a popular festival food, served often at temple celebrations and weddings.

So, what exactly is Jalebi?

I think the best way to describe jalebi would be to equate it to a funnel cake, but it’s so much better. The batter of the jalebi consists of maida (refined wheat flour), saffron (saffron gives the jalebi it’s characteristic orange color) and cardamom- all are whisked together until it reaches a ribbon-like consistency. It is then pipped into concentric circles and fried until it’s golden brown. Once fried, the jalebi is soaked in sugar syrup (which also sometimes may contain saffron) and is then ready to serve. So, you see, it’s so much better than the funnel cake, which in my experience can be dry and rubbery. And of course, jalebi tastes best when it’s consumed piping hot. You really don’t want to have a cold jalebi.

Today, Jalebi is very popular across India. It’s not entirely uncommon to hear people eating Jalebis (usually with a glass of milk) for breakfast in the North Indian cities of Haridwar and Indore. People also eat Jalebis as snacks, along with a cup of tea.

Want to make your own Jalebi? Follow the recipe below:

The Myths of Turkey: Sarıkız