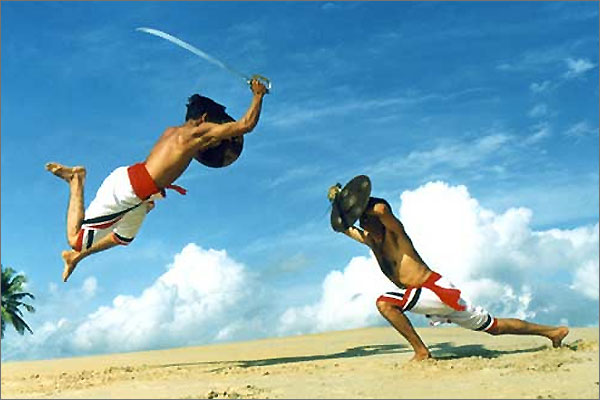 The British may have dented the martial art wave in India, but Silambam is making a gradual comeback.

Skills like martial art almost always have origin in basic survival skills. Silambam is a martial art form that originated approximately 5000 years ago in Kerala. Silambam was practiced in the 1700s in the courts of Kings like Puli Thevar and Maruthu Pandiyar. It was mainly used as an asset in combat skills, and soldiers mainly relied on it to fight the British army.

The etymology of the word Silambam itself is quite fascinating. Silam means hill, and bam is a short form for bamboo, which is a marathi word. Therefore, it literally translates to ‘the bamboo from the hill’.

The stick used  is around 1.68m long, and weighs around a pound and a half. The practice of Silambam also involves the use of metallic whips, spears and deer horns as weapons.

To support these theories of the origin of Silambam are age-old terms used for the several techniques and practices, one of them being Narikuruvai, which refers to a special kind of footwork meant to acquire ‘revenge over the foe’.

Natives would often fight off ravenous wild animals with large staffs and sticks to defend themselves. These techniques were extracted and fine-tuned to turn them into an elaborate and stealthy form of martial art. The practice of Silambam requires a combination of mind and body, and immense control over footwork and agility.

There are several different kinds of  specializations, and these are based on the purpose it serves. Warfare, performing arts and fitness are the three main forms of Silambam.

However, the usage of the martial art in warfare and combat declined during to the colonial rule.

“Sharp spears and lethal movements of the Silambam practitioners alarmed the colonizers, who were more focused on using the high tech-weaponry like metal cannons and guns. They were also very confused by the use of free body movement. This perplexed and scared them, and hence they banned the practice altogether. They did not want the Indians to oppose them with lethal martial art, so they put a stop to it,” said Dr. Sahul Hameed, a Silambam master, while speaking about the decline of warfare related Silambam practice due to British propaganda.

“Warfare related Silambam has always been on a decline since the British, but other forms are slowly gaining some popularity in Kerala. Silambam as fitness is being instructed in schools across the state, but it is only an option for student,” said Hameed.

Thus, lost cultural phenomena threatened by external factors can make a comeback into the cultural framework if they are given impetus to showcase their novelty.

“Silambam is not like Kung Fu, which is compulsory in China, but cultural performances to showcase Silambam as an art must be encouraged. I feel like this broadens the scope of martial art,” said Hameed.