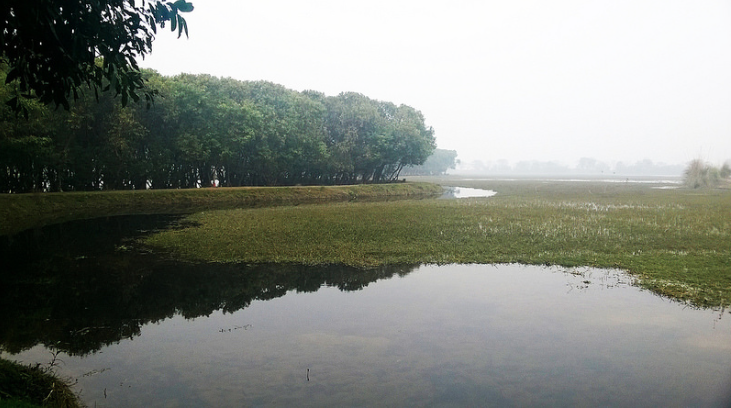 Sheikha Jheel is a lake situated 17 km from Aligarh (Uttar Pradesh) on Aligarh Jalali road, near the village of Sheikha. It falls in the Koil tehsil of Aligarh district. The Upper Ganga canal flows adjacent to the lake. The lake and the village are less than a kilometer away from the Sheikha village bus stop. The total area of the lake is 25 hectares.

This Jheel came into existence after the formation of the Upper Ganga Canal in 1852. It is a freshwater perennial water body surrounded by agricultural fields on two sides. The Upper Ganga Canal divides the lake into two parts. The area receives moderate rainfall up to a maximum of 644 mm. The lake and its surrounding areas support a diversity of habitats, viz. wetland, grassland, forest etc. The wetland forms an ideal habitat for the waterfowl and other water birds, especially during the winter months.

Among endemic flora, the dominant tree species that surround the lake are Terminalia arjuna and Syzigium cumunii. The other components of the vegetation include acacias, Dalbergia sissoo, neem, among others. The major weeds include Lantana camara, Sida, Parthenium hysterophorus and Cassia tora.

The shrub species include Ipomea aquatica and, Muraya koenigi. Only a few mammalian species are found in the area like the blue bull, blackbuck, five-striped squirrel, Indian mongoose, black-naped hare, rhesus monkey and the jackal. About 166 waterbird species have been reported in and around Sheikha. Some of these include the great crested grebe, painted stork, bar-headed goose, purple heron, and so on. The area is clearly a hub for biodiversity, and is a must visit if one is around the area.

The Kaa waterfall in Babalonma