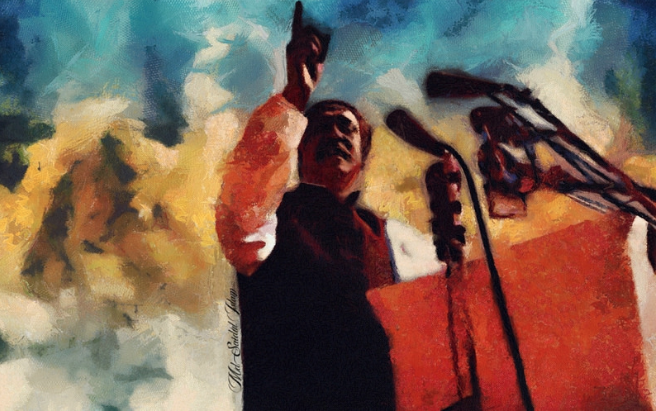 Popularly known as Bangabandhu (friend of Bengal), Sheikh Mujibur Rahman was a Bengali politician and statesman. He was the founding father of the People’s Republic of Bangladesh and served as the country’s first President and Later Prime Minister until his assassination in August 1975. He was also referred to as Sheikh Mujib or Mujib. He was the ‘Father of the Nation’ of Bangladesh.

The main credit for the independence of Bangladesh is given to him. He delivered a famous speech in Dhaka, during a period of escalating tensions between East Pakistan and the powerful political and military establishment of West Pakistan. The speech is popularly known as the 7th ‘March Speech of Bangabandhu’. It has been included in the book ‘We Shall Fight on the Beaches: The Speeches That Inspired History’, by Jacob F. Field. The speech is also in the Memory of the World Register of UNESCO, a list of world’s important documentary heritage.

A student of Islamia College, Mujib became politically active when he joined the All India Muslim Students Federation in 1940 and was elected councilor for a one year term. Later he joined Bengal Muslim League in 1943. Through this time, he worked dynamically for the Muslim’s Leagues cause of a Separate Pakistan, a brainchild of Mohammad Jinnah. With his consistency and hard work, he went on to become the General Secretary of the Islamic College Students Union in 1946. In 1947, when India gained independence, communal violence erupted all across Calcutta. Mujib, who worked under the leadership of Huseyn Shaheed Suhrawardy, attempted to repress violence while shielding the Muslims.

Following the partition of India, he joined the University of Dhaka in the then East Pakistan to pursue law and later on in 1948, he founded the East Pakistan Muslim Students’ League. Sheikh Mujib launched strong protests and activated the communication network of political leaders and students to oppose the decision of Province Chief Minister Khwaja Nazimuddin and Muhammad Ali Jinnah who announced that Bengalis of East Pakistan will accept Urdu as the state language. Mujib was arrested for a conspiracy charge against Bengal along with several other leaders and students.

However, the strong protest organised by students and mob compelled the government to release him and others. He then faced expulsion from the University. He then joined hands with Bengali nationalists Suhrawardy, Maulana Bhashani and others to form the ‘East Pakistan Awami Muslim League’. Soon, he became the general secretary of the party and in a year’s time he was elected a member of ‘East Bengal Legislative Assembly’ on the ticket of the coalition ‘United Front’.

After the death of Suhrawardy in 1963, he became the head of ‘Awami Muslim League’ which was re-christened as Awami League. This party went on to win the democratic election of Pakistan held on December 7, 1970, with an absolute majority under Mujib’s leadership, but the party was not invited to form a government.

This led to mass protests against such discrimination and a civil disobedience movement was initiated by Mujib in 1971 who called for the independence of Bangladesh.  ‘Operation Searchlight’ was conducted by Pakistan Army and Mujib was arrested and moved to West Pakistan.

The Bangladesh Liberation War followed and Pakistan had to surrender to Bangladesh-India Allied Forces. After Mujib was released on January 8, 1972, he received a warm welcome in Bangladesh and became the President of the provisional government of Bangladesh and later took charge as the Prime Minister. After his release, he met the British Prime Minister, Edward Heath, in London, and addressed the international Media. He was helped by Indian President Varahagiri Venkata Giri and Prime Minister Indira Gandhi in the liberation war of Bangladesh.

Mujib played an instrumental role in Bangladesh’s inclusion in the ‘Non-Aligned Movement’ and also into the ‘United Nations’. He also signed a friendship treaty with India and strengthened International relations of Bangladesh. Mujib and most of his family members were assassinated on August 15, 1975, in a military coup initiated by treacherous army men and discontented members of ‘Awami League’.