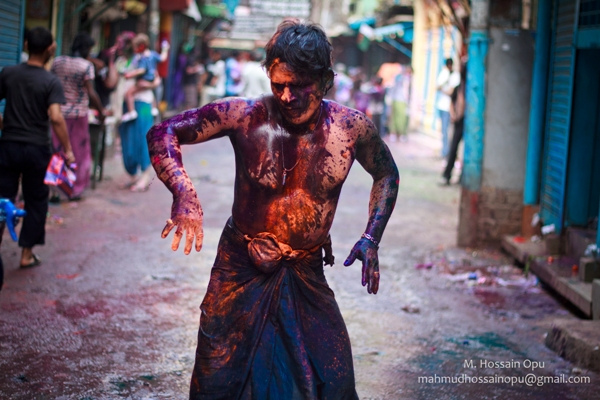 Hindu Street, also known as ‘Shakhari Bazaar’ in Bangla, is the oldest street in Dhaka city. It was constructed at the time of the Mughal Empire in the 17th century.

The Conch was something that this marketplace was famous for. A profession that started 300 years ago, Conch makers have passed the craft on from generation to generation. During the war between Pakistan and Bangladesh, this area was laid to waste by soldiers, but still stands tall to be the oldest surviving street in Dhaka, with an elaborate marketplace to boast.

Hindu Street is full of temples. The Hindu population flocks to temples in large numbers for worship. The Shakhari people were a sect of vegetarian Hindus who followed God Vishnu and Krishna. The Shakhari men were very protective about their women were very religious which caused them to nor to appear in front of unknown men. Durga puja is also another zealously celebrated festival that attracts large crowds to the area.

Shakhari Bazaar is also famous for different kinds of Musical instruments. You can find many shops full of musical instruments on both sides of the street. You may see the craftsman were making their musical instruments in their own shops and directly sealing them to the customers. Classical instruments like the Dhol, Tabla and Dotara are available in abundance in the market. Through the ages, handicrafts have been passed on as well.

The narrow lanes of the market sport several pieces of intangible heritage, such as the art of conch making, and thus, provide ample space for academic inquiry into the history of Dhaka itself

The spatiality of a Museum