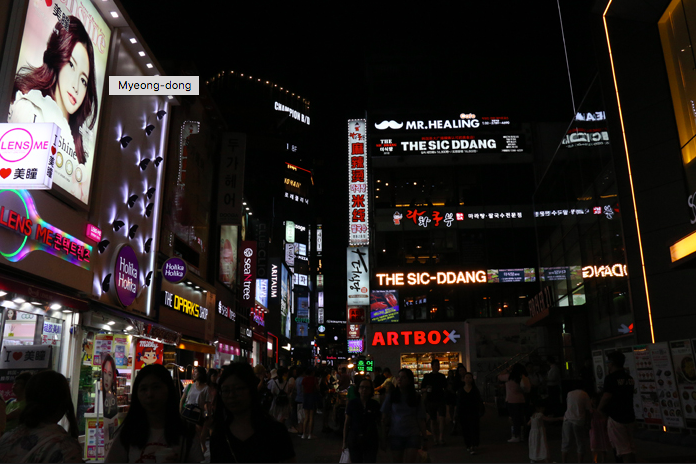 One persuasive Youtube video and a pleasant fake news climate incubated my number one rule for my entire South Korean adventure [Verbatim] – “Carry tissues to use as toilet paper in public bathrooms but, whatever you do, DON’T FLUSH IT!” Perhaps if I had checked my facts about Seoul before my trip as opposed to a month later, Incheon airport would not have received a wad of lightly dampened toilet paper in its dustbin. Turns out, the aforementioned video is three years old and Seoul’s new pipes can really take a load. This anecdote is all to say that Seoul is a city that is rapidly developing from head to toe, pipes to skyscrapers and the fashion market is nestled cosily in-between for the ride up.

Fashion as Culture in Seoul

For over two decades the fashion Meccas of the world have been Paris, London, New York and Milan. In the past ten years Berlin and Tokyo were thrown into the frenzy as well and recently, Seoul – the capital and largest Metropolis of South Korea – has pulled up a seat to the proverbial table. The key factor differentiating Seoul’s sartorial atmosphere is individuality. Hypebeast* culture has long since taken flight and migrated to cities like Los Angeles, and Seoul’s youth, now tired of the mainstream are looking towards the avant-garde to exhibit and accentuate their identities. The city caters to every style and budget, ranging from the most niche vintage t-shirt of a band long forgotten, to those Comme Des Garcons x Converse sneakers you see all over Instagram.

This guide will by no means be an exhaustive list and considering the rapid morphing of the city, I would definitely suggest personal research before visiting. However, this is a great place to start and the locations herein are guaranteed jaw-droppers. For your convenience, the guide has been split into three parts: areas to roam around, individual stores to visit and the clincher – Gwangjang Vintage Market.

Note: Special thanks to Estelle Tcha and Diana Ryu for being so helpful and taking the time to thoroughly instruct me before and during my trip. My trip would not have been the same without you both.

If You Just Want To Roam

Myeong-dong is a great way to ease into Seoul. It’s a lively, pedestrianized area with a maze of wide streets surrounded by massive, brightly-lit storefronts on the ground floor with restaurants and other businesses on the upper levels. The middle of the streets are lined with a variety of tantalising street-food stalls (a must-have). You’re going to see a lot of familiar faces such as Zara, Uniqlo and H&M alongside dozens of the K-beauty (Korean beauty) stores that the country is known for. There’s a scattering of higher-end participators as well such as MCM and Boy London who are geared more towards street-wear.

While Myeong-dong slowly dies down after 10 PM, Hongdae is still alive and kicking. The crowd here is noticeably young with colourful characters in their early to mid-twenties. If you’re lucky you might catch a dance battle on the streets – or five – that is taken very seriously by both dancers and audience. In my one-week exploration of Seoul, I returned to Hongdae several times and found it to be a treasure trove of creative, unique and inspiring street style. Row upon row of street-wear stores and stalls offer up their wares at incredibly reasonable prices. Think graphic tees, bucket hats and Hawaiian shirts galore. Let it be known that I love basements of all kinds, in all countries – basement clubs, basement dungeons, basement bedrooms – but nothing compares to my love of basement vintage stores. If you see a sign with some kind of variation of ‘Vintage Store’, a small, unassuming entrance and an ominous, steep staircase, I strongly recommend entering. The façades of these stores are deceiving and I have never encountered such a breadth of vintage clothing in any other country I have been to. The prices aren’t unjustifiable and are lower than their counterparts in other countries. However, for even better deals I suggest Gwangjang Market (more about it later in the article).

Gangnam is known to be the most affluent area in Seoul and yes, it is what Psy was referring to in Gangnam Style. However, my preconceived notions formed from the song proved to be incorrect; although expensive, Gangnam is not a flashy area at all. What was most interesting is that unlike other major cosmopolitan cities, the most exclusive stores in the area are not lined up on one main street (e.g. Contrasting to Rodeo Drive, Los Angeles and Oxford Street, London), rather, they’re covertly tucked in steep back streets with nondescript entrances that suggest nothing of the wonders that lie within. Accessing these stores (listed below under concept stores) will require a little hike if you’re not in a car, and provides the perfect opportunity to count the Maybachs in the area, or stumble upon an irresistible ice-cream shop with very resistible prices.

Seoul takes the term concept store and puts it on steroids… in the best way possible. As a reference point for the seasoned shopper, these stores are comparable to the much-loved Dover Street Market. With online shopping having become the preferred route for consumers, these concept stores act as strong pushback, providing an immersive experience that can’t be paralleled by a backlit phone screen. These spaces act as intersections of art and fashion, advocating the creation of dialogue in a previously static realm.

Located in Hongdae, Ader Error exhibits unisex collections with striking silhouettes designed by an anonymous team of 20 creatives spanning a number of professions. As of 2018 Maison Kitsuné joined the Ader party with a creative collaboration and a Café Kitsuné outpost. To make matters better, each space and floor in Ader Error (including trial rooms) is curated to act as a fresh experience.

Gentle Monster rests in Gangnam across the street from its sullen twin Gentle Monster Parallel. The two stores sell high-quality eyewear with the former displaying sunglasses and the latter specialising in prescription glasses. Their brand carries every style from the more conservative, to the experimental designs that they’ve become known for worldwide. The eyewear is scattered across the upper three floors with the ground floor and basement solely devoted to immersive installations that engage all your senses. Meanwhile, Gentle Monster Parallel is a quiet matte-black two-story giant with glasses displayed on minimal shelves placed amongst areas of volcanic rock, sand, water and grass.

Walking distance from Gentle Monster is BoonTheShop and Rare Market. Rare Market is run by a two-woman powerhouse and holds exclusive statement pieces curated and sourced every season (and sub-season) from labels across the globe. While Rare Market caters to a niche audience, BoonTheShop is almost the complete opposite. The store stands at 55,000 square feet and is a veritable Barney’s-sized monolith. BoonTheShop carries much more than apparel and extends into accessories, records, objets d’arts and the occasional BearBrick. Although primarily high-end, the store also hosts select picks from the usual suspects like Nike, Reebok and Adidas.

A destination so tantalising that it warranted its own category. The Gwangjang Vintage Market holds an almost mythical status both in the real world and online. Multiple Reddit chains are filled with desolate would-be-shoppers lamenting, “Does Gwangjang market even exist?” Typing ‘Kwangjang Market’ into Google Maps is sufficient to get you to your starting point – streetfood stalls, octopi pulsing in tanks, bed and bath linens, cutlery and crockery – a large, covered marketplace teeming with life. Unknown to all the tourists below, there’s a massive warren of stores just above their heads on the second floor of the market. The quickest way to get to the Vintage Market is locating Exit #12 of Jongno 5-ga and walking up to the second floor from here. After this, it’ll take five minutes of walking past Hanbok** stores until you suddenly stumble upon Narnia.

I warn you, the Gwangjang vintage market has no windows and lies in a time warp; you can easily walk in during daylight and walk out to a dark sky. Stalls are manned by young locals – soon to be your best friends – that seem to have stepped right out of King Kong Magazine. The prices can be unbelievably low if you’re ready to haggle for them with a sweet “Kaka Juseyo?” (“Please, can I have a discount?”). Expect to see vintage YSL, Burberry, Adidas, Nike, Umbro, Sports Jerseys, Ralph Lauren and tons of Doc Martens.

Tip: With the higher-end brands, err on the side of suspicion in order to spot fakes interspersed with the authentic garments.

I was in Seoul an entire week and I was barely able to scratch the surface of all the city has to offer. With pre-existing stores changing in a chameleonic way and new stores multiplying at a dizzying rate, it’s hard to say whether your experience will be similar to mine if you visit even a month from today. However, I can guarantee that like me, you’ll leave invigorated, inspired and slightly empty in the wallet.