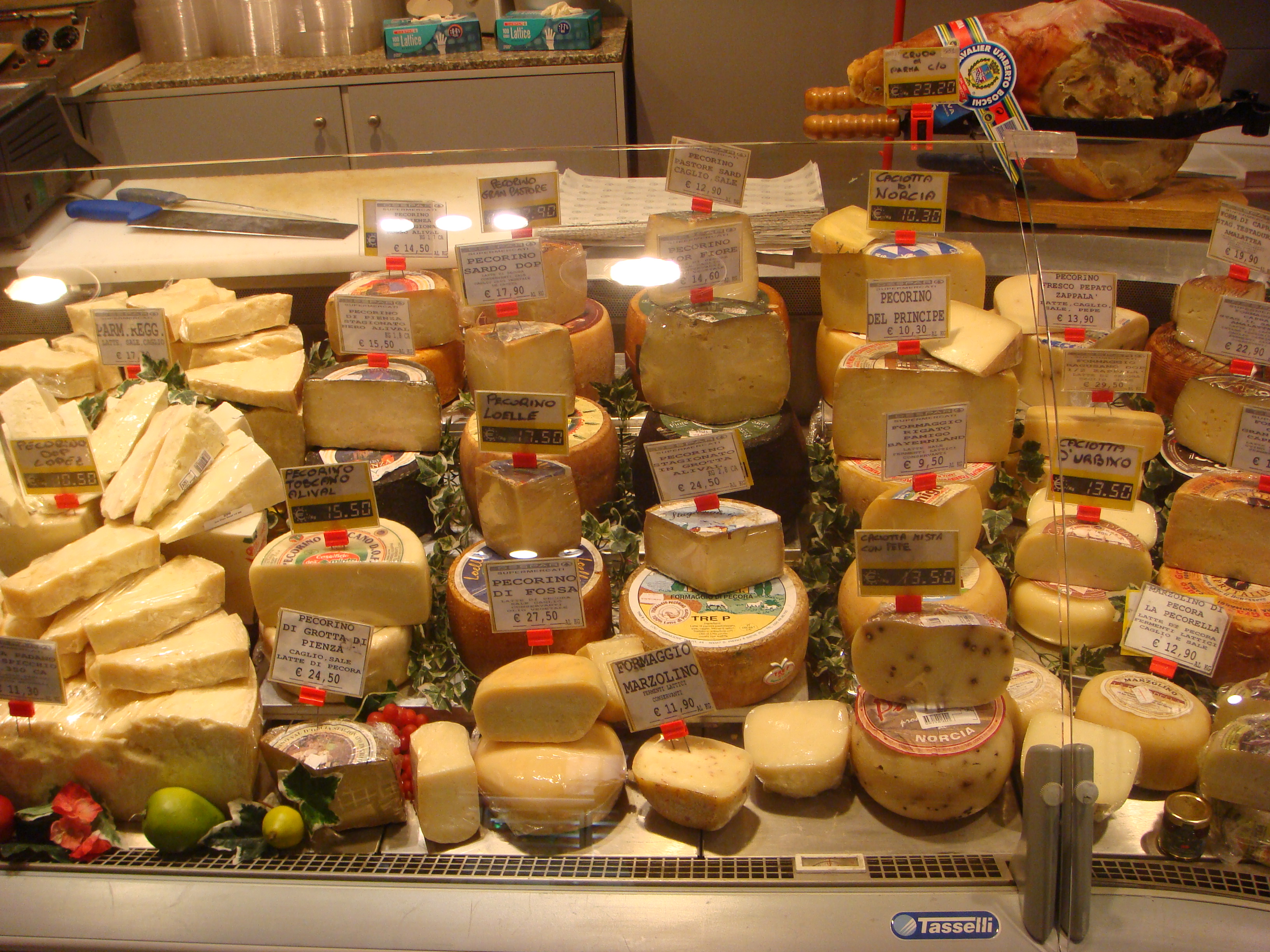 Why is food considered an Intangible Cultural Heritage? What does cheese represent in Italy and in Friuli-Venezia Giulia region? Can a cheese dish represent a culture and an identity?  Italy and the UK: are they too much different or do they have something in common?

In the Mediterranean area, cheese is one of the most common products used in the recipes. There are different kinds of cheese and each cheese has different characteristics, like the aging time, the milk, the region of production, the texture (hard or semi-hard, soft or semi-soft). The cheese was discovered in the 5,500 BCE, but the art of cheese-making began only with Greeks and Romans during the Roman Empire. After that, the development of the production of cheese started and it spread like wildfire. Nowadays, cheese is one of the product most consumed.

In Italy, we like it a lot: we eat an average of 20 kg of cheese par person in one year. It seems impossible but we do it!!! There are more or less 1300 kinds of cheese and everyone has different peculiarities.

Italy can be divided into three parts: North, Centre, and South. In each part the production of cheese is different. In the North, cheeses are usually hard or semi-hard and they have usually a long aging time. They are usually made with cow’s milk, like the most famous Italian cheese Grana Padano; in the Centre, cheeses are usually made with sheep’s milk and in the South cheeses are usually soft and semi-soft cheeses made with buffalo’s milk like buffalo mozzarella. Therefore, in Italy, we have a great number of cheese’s typologies, but only 46 kinds have the European scheme known as “DOP” (Protected Designation of Origin). It is a designation to certificate and guarantee the qualities of cheese, like geographical indications and traditional specialities.

For example, in Friuli Venezia Giulia, a region situated in the Northeast Italy, the most common cheese is Montasio cheese and it is certified as DOP. It is produced in Friuli Venezia-Giulia, in Carnia, which is a mountain region where there is Montasio upland. It is a hard cheese, made with cow’ milk. Its aging time is from 60 days to 1 year and it is unpasteurized.

Montasio cheese is also known because it is the main ingredient of Frico, the traditional dish of Carnia. Frico is not only a cheese dish but is also an identity card. In fact, Italians link Frico with people from Carnia. On the other hand, Firco is a special welcome: people who live in Carnia offer Frico to their guests. For these reasons, Frico is more than a cheese dish.

The ingredients of Frico recipe are Montasio cheese, potatoes, and onions. It is a poor dish, invented by woodmen because of the lack of meat. The recipe was passed down from one generation to another and women play an important role in this process. People from Carnia are very proud of Frico: it is part of the history of the region.

Would you like to taste Frico? Are you in the opposite part of the world but you can’t buy a ticket for Italy because of the economic crisis? Don’t’ worry, I give you the ingredients, the recipe and, thanks to the globalization, you can taste the Frico made with your hands.

It is easy to prepare this cheese dish.

First of all, grate onion and put it in a non-stick pan with olive oil. When it becomes gold, grate potatoes and Montasio cheese and mix them together with gold onion in the non-stick pan. Cook Frico until it forms a crust, turn it and do the same thing on the other side.

The cooking time is about 15 minutes. You shall serve Frico hot.

This is the original and traditional recipe. There are also different recipes: you can add to the original Frico recipe other ingredients, like apple, seafood, or tomato sauce. You can also taste a Frico thinner or thicker. It depends on the chef’s tastes and, in particular, on his/her creativity.

In Friuli Venezia Giulia, all restaurants offer Frico every day of the year, but there are also festivals of Frico during specific periods. For example, in Carpacco, there is the biggest Festival of Frico, called “Sagra del Frico”. It is celebrated on August every year. This year it will be celebrated from 12th to 21st August. It is a festival to taste the traditional Frico, but also a bizarre one. In fact, you can taste all kinds of Frico, with the strangest ingredients. It is interesting the way in which one recipe can be reinvented. Honestly, I’m a traditionalist and I prefer the original recipe!

Frico has become famous all around the world thanks a fortunate victory. In fact, in 2014, Masterchef USA was won by Luca Manfrè, an Italian chef who has lived in New York for 10 years. During the last test, he prepared the traditional cheese dish of his region: Frico. It was the right choice because he won the competition. After the win, he has started to prepare Frico in his restaurant in New York. In this way, a regional recipe became an international cheese dish.

To sum up, in Italy, there are different kinds of cheese and people love so much cheese. In particular, in Friuli Venezia Giulia, the identity card is a cheese dish called Frico. But what’s about cheese in the UK?

In the UK, there are more or less 700 kinds of cheese, whose 14 are classified as PDO (Protected Designation of Origin). British love cheeses too!!! The typologies are blue cheese, hard and semi-hard cheese and soft and semi-soft cheese. British are famous for the Cheddar cheese and for the Blue Cheese, which is characterized by spotted or veined throughout with blue, or blue-gray mould.

She chose a dish called “Welsh Rarebit”. The ingredients of the original recipe are Single Gloucester cheese, bread, butter, mustard and pepper.

It is a cheese dish very easy to prepare and I enjoyed a lot to prepare it. Unfortunately, I didn’t find Single Gloucester cheese at the supermarket. I discovered that it is very difficult to find British cheeses in Italy. For this reason, I tried to prepare the recipe with an Italian cheese. I choose the Tomino cheese (produced in Piedmont region, Northwest Italy), which has the same characteristics of the Single Gloucester cheese.

When Miki told me the recipe chosen by her I was very curious because of the name of the recipe. I asked her the origin of the name and its meaning. She told me that “rarebit” is the ancient word for “rabbit”. In fact, the dish was the alternative meal when poor people hadn’t meat to eat. This means that both PDO cheese we chose were used instead of meat in the past.

It isn’t the only thing in common. Nowadays, both traditional dishes are prepared as regional dishes, with some variations too. People add to the original recipe ingredients like an egg, beer, and other ingredients, it depends on the tastes.

Thanks to GIP task#1, I discovered that Italy and the UK aren’t so different. Italians and British love cheeses and in both diet cheese is a fundamental ingredient. Miki and I chose poor dishes which were prepared because of the lack of meat. This means that the regions of origin of our dishes were poor zones. Nowadays, same dishes become a richness because they are identity cards for people who come from the region (Carnia in Friuli Venezia Giulia and Gloucester county).

In addition, during the years, people have experimented different recipes, there are a lot of varieties of the original dishes. At the same time, people don’t forget the original recipe. It was passed down from one generation to another, even to the present day. Passing down the original recipe and sharing our traditional dishes are the two things which make the knowledge endless. It is important because a dish represents a culture and a specific zone and this is an important heritage to preserve.

In conclusion, Miki and I enjoyed a lot preparing new recipes. In particular, we have discovered how much our traditions are similar and how much an Italian and a British girl have in common, even though we live in different parallels of latitude and meridians of longitude!!!

Going Bananas: A three-tiered meal with a Jamaican touch