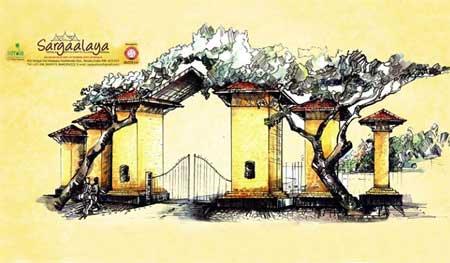 This article is written by Saumya Sinha. It was originally published on www.nazariya.in,  an initiative that is connecting rural India to metropolitan cities

Platforms for the display and expression of artistic forms are integral to a country’s culture. Sargaalaya, which occurs in Kerala, is India’s repository of fine art techniques.

India is a treasure trove of the arts. Several platforms exist across the country that showcase this diversity of art forms and techniques. Sargaalaya, an arts and crafts festival which takes place in the village of Iringal in Kerala, is exemplary of such platforms.

Initiated by the Department of Tourism of Kerala, the festival is an exclusive space for the arts and crafts of the traditional artisans of Kerala. One can even learn the techniques behind some of these forms here. Tourists have the opportunity to interact with several craftsmen to understand the subtleties of crafts making. Essentially, Sargaalaya enables the revisiting and sustenance of art forms.

Below are some art forms that Sargaalaya focuses on:

Wood carving is an art form that is practised using a cutting tool and chisel. Wooden figurines of deities such as Buddha and Ganesha are made using these techniques. The creation of ornate and antique furniture also involves the craft of wood carving. The practice originated in Rajasthan in the 17th century, and has been prolific ever since. THe intricate doors and windows in havelis and palaces are testimony to the popularity of wood carving in the Medieval era. Even today, artisans practice Wood carving in several parts of Rajasthan.

Phad painting comes from Rajasthan and is characterised by religious scrolls that are dotted with mythical details. Artists paint on a large piece of cloth to create Phad. The paintings depict the life of Pabuji and Devnarayan. Natives worship them as incarnations of Lord Vishnu and Laxman. Artists use vegetable colour as the medium to create these scrolls. They depict the life of Gods and heroes, and provide visual accompaniment to song and dance that narrate these myths.

Miniature paintings involve a large degree of intricacy. These are vibrantly coloured, and a lot of effort goes into their creation. The level of detail involved is what gives them their unique identity. The Mughals who hailed from Persia introduced the Indian subcontinent to the art of Miniature Painting. The themes that these paintings focus on are :mythology (especially stories involving Lord Krishna), royal life and courtly affairs, lethal wars and nature.

Puppetry has always held an important role in the sphere of traditional  entertainment. Just like traditional theatre, the subject matter for puppetry consists mainly of myths, and stories derived from them. Puppets from different parts of India are distinct from each other. These puppets reflect traditional styles of fine art. The string puppets from Rajasthan are known as Kathputli, puppets from Orissa are known as Kundhei, and those from Tamil Nadu are called Bommalattam.

The art of stories and tales imbued in spirituality brings good fortune. Gond art reflects this, and is created by the largest Adivasi community in India, called the Gonds. Storytellers by profession, this community comes from Bhopal. They narrated stories that glorified and praised the king, and this was the main source of their livelihood. Gond art also adorns the walls of households within the community. The art form consists of dots and lines. The colour used is natural. Organic ingredients like charcoal and dung are used to create it. Gond essentially forms the essence of ‘organic art’, along with several other forms that perpetuate within India.

Each and every Indian community that distinguishes itself by art has a story to tell. These stories, which are of varying content and nature, are express the heart and soul through art. Platforms such as the Sargaalaya Art Festival enable these artisans to voice their experiences. A platform for such expression is always helpful to the preservation of this array of forms for posterity.

Las Médulas in Spain Celebrates 20 Years of Heritage in 2017