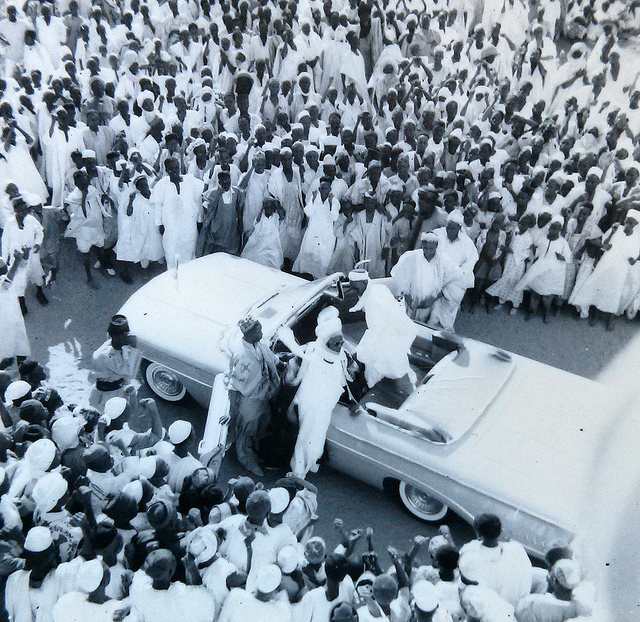 Ahmadu Bello was born in June 1909 in the Sokoto Province of Rabah in the then Northern Protectorate (now part of Nigeria). He was the only surviving son of Ibrahim, the District Head of Rabah and a great-great-grandson of the great Fulani theocrat, Uthman dan Fodio.
Bello had Quranic tutelage and started his western education at the Sokoto Provincial School. In 1926 he proceeded to attend the Katsina Training College (which later became the legendary Barewa College) where he graduated as a teacher in 1931 with a credit-equivalent Grade III result. Later that year, he became a teacher at the Sokoto Middle School. His entry into the native administration system enhanced the modest socio-political influence he had begun to build in his teaching days at the Sokoto Middle School.

Thus when the incumbent Sultan Hassan of Sokoto died in 1934, he presented the most formidable challenge in spite of his youth and relative inexperience in the elections for a new head. His political stature then was enhanced by his ties to the Waziri Sokoto through marriage, his western educational background and his fast rising reputation as an efficient, (in his fourth year as District Head of Rabah he was the first provincial leader to complete his tax returns to the colonial authorities) young, and popular leader.
However the British resident

in Sokoto, John Carrow, under the erroneous impression that Abubakar was the son of the late Sultan, owing to his having heard Sultan Hassan repeatedly refer to the former as his son, set aside the reported choice of Ahmadu by the Selection Council in favour of Abubakar. Thus Ahmadu, as the runner-up was conferred with the title of Sardauna.
The somewhat ambiguous title was the designation conferred in ancient times on the commander of the palace bodyguards. At that period however, it was significant as the designation of the Chief Political Adviser to the Sultan. The subtle rivalry between Ahmadu and the new Sultan Abubakar III led to his exile in Gusau as Councillor in charge of fourteen of the forty-seven districts in the Eastern area of Sokoto.

In the meantime, his perceived separatist tendencies from the British, and the Sultanate was giving the Sultan cause for alarm. In 1943 he was hurled before the Sultan’s court on charges of misappropriating Jangali (cattle) tax for the Gusau area and promptly sentenced to one-year imprisonment.

The Sultanate had leveled the charges against him against the backdrop of garawa (gifts given to the descendants of Uthman dan Fodio) given to him by the Fulani population and which he, in turn, regularly recycled among his circle of supporters and friends.
However, in the light of his unimpeachable credibility and popular following especially among the new breed ‘Barewa Boys,’ Shehu Shagari, Ibrahim Dasuki, and even Aminu Kano among others, and also some segments of the northern aristocracy chiefly personified by Sanusi Mohammed (who later became the Emir of Kano) he filed for and won an acquittal after three months in jail.

This new victim status further helped to bolster his mass appeal in the north and in 1944 he was recalled to Sokoto city as Chief Secretary to the Sokoto Native Authority.
In January 1948 he, along with some other northerners, was chosen to tour the United Kingdom and also attend a course in Local Government Administration. While there he stayed with the family of J. Fletcher, a British insurance agent for a month. The eight-week experience further helped to broaden his knowledge of the world around him as well as his administrative skills.

In January 1949, he succeeded the recently deceased Waziri Abbas as Senior Councillor representing Sokoto Province in the Northern House of Assembly on the nomination of the Governor of the Northern Region, Eric Thompstone in spite of the objections of the Sultan.
In 1951 he, along with two northerners, was chosen to represent the north in the drafting of what later became known as the Macpherson Constitution; he would later represent the north again at the London Constitutional Conference of 1957.

In 1952 his five-day old son from his youngest wife, Jabbo, died; in 1936 he had equally lost a two-year old son, Mohammed Tambari from his divorced wife, Kande. On the heels of his appointment as Minister of Works for the Northern Region in 1951 and his representation of the north at the Federal House of Representatives in Lagos in 1952, also came his appointment as Minister of Local Government and Community Development in 1953. In 1954 he emerged as Premier of the Northern Region in his capacity as leader of the majority Northern People’s Congress. In 1955 he went on the hajj pilgrimage for the first time. He led the north through the self-government period of 1959 and was subsequently created a KBE by Queen Elizabeth II.

Despite the relative success of the NPC in the federal elections of 1959, he chose to remain in the north as Premier and instead retained his meek deputy in the NPC, Tafawa Balewa as Prime Minister in Lagos.

He was killed in the January 15, 1966 coup and a bodyguard in Kaduna.His controversial but sincere and successful Northernization policy, establishment of the Ahmadu Bello University and Stadium, Bank of the North, and even the Nigerian Defence Academy to mention a very few still endure as one of his post-independence developmental legacies to Northern Nigeria. In November 2000, the Obasanjo administration immortalized him by putting his portrait on the obverse side of the newly introduced 200 naira note.